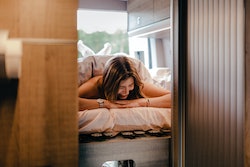 Anyone who has seen a vagina knows that there's a lot going on down there. And just like any complex work of art, there's a lot that can go wrong. And when you're receiving oral, everything that can possibly come from your crotch is going to happen right in your partner's face. If you're worried about how your vagina smells or tastes, there's seriously no reason to be worried. But just as with any type of sex, there’s plenty of opportunity for things to get messy during oral.

1. Your Partner Finds A Stray Piece Of Toilet Paper

Just in case you needed another reason to hate one-ply toilet paper, think about how easy it is for a scrap of it to get stuck somewhere down there until your partner accidentally removes it with their tongue. Lots of us occasionally leave a little TP behind, but it usually gets washed or peed away before being discovered. It might make you cringe if your partner finds a bit of white paper, but hey, at least they can be 100 percent sure you clean up after yourself.

2. You Really Need To Fart While They’re Going Down On You

When your legs are spread and a person's face is between them, the very last thing you want to feel is that gurgle deep within your digestive system that signifies a bubble of air just dying to escape. It can be enough to ruin the experience entirely — rather than focusing on how good you're feeling, you're focusing on keeping yourself as tightly closed as possible. You can go that route, or let your partner know you need to excuse yourself for a moment. Try something like, “I’m really enjoying everything that you’re doing right now, but I really have to pee,” and then take care of business in the bathroom. Also, your partner will likely to be too wrapped up in their task at hand to even notice if you happen to let one fly.

Friendly reminder to all the people out there: Queefs themselves are not gross. They're just air from the outside world that was pushed into your lady pocket and decided to use the entrance as the exit. However, that sound they make isn't exactly the sweetest tune in the world. And the worst part is, you really can't control a queef. If your vagina wants to make some noise right at the moment your partner buries their face into you, there ain't no stoppin' it. A mature couple will laugh at the moment and carry on, but there's still no denying that the sound is hardly sexy.

4. They Burp Or Sneeze

The good news (or bad news?) is it isn't always the recipient who has air coming out of them during oral. Just as we can't always tell when a fart is creeping up on us until it's already released into the air, belches, and sneezes can also come on quite suddenly. And if your partner happens to be eating you out when one sneaks up on them, you might find that you're a little more wet down there for all the wrong reasons. Most people are able to at least turn their heads away if they need to expel any air from their bodies, but every once in a while, luck won't be on your side... or between your legs.

5. Their Tongue Moves Too Far South

6. You Get Your Period

Periods are a natural part of life for many women, but that doesn't mean you want it to happen without warning during oral sex. A Men's Health poll revealed that 60 percent of guys have no problem having sex with a woman while she's on her period, but you can hardly blame a person for not wanting to actually go all Twilight during an otherwise sexy escapade. Realizing your time of the month came at exactly the wrong time isn't the worst thing that could happen during oral, but it's definitely something some people want to avoid no matter which end of the bed we're on.

7. A Hair Gets Stuck In Their Teeth While They’re Giving You Oral

There's not a single thing wrong with deciding to keep your hair down there, but if you do, your partner might return from their oral escapades with a few souvenirs. When you think about the fact that someone is literally licking your genitals, getting a bit of fuzz mixed in doesn't seem like a big deal. But even so, the sensation of having a hair on your tongue is not always a pleasant one.

8. You Worry About How It Looks Down There

Rena Martine, a women’s intimacy educator and coach, says that she has worked with a lot of people that don’t allow their partners to eat them out because they’re worried about the shape of their vulva. “It’s mind-boggling how many women are insecure about letting their partners down there.” Martine says that best way to relax about the appearance of your vulva while you’re getting eaten out is to understand that most depictions of vulvas (like in porn) aren’t an accurate representation of what many vulvas look like. Martine says that your partner has probably already seen vulvas that look like yours, so there’s no need to stress out!

Even if any of these things happen to you, it doesn’t mean the entire sexual experience is shot. You and your partner may decide to ignore it, or better yet, talk it out! As Vanessa Marin, a sex therapist previously told Bustle, “Communication is so crucial to good sex.” A good trusted partner will have no problem with you bringing up the elephant in the room, and it may even bring the two of you closer together.

More like this
The Juiciest “Would You Rather” Questions For Couples
By Alice Broster and Rachel Mantock
I'm 42 & I've Never Had Sex. Is It Too Late?
By Sophia Benoit
This TikToker Has Genius Advice For Boosting Your Dating Confidence
By Lexi Inks
Are Gemini & Leo Compatible In A Relationship?
By Kristine Fellizar
Get Even More From Bustle — Sign Up For The Newsletter

This article was originally published on Oct. 26, 2015