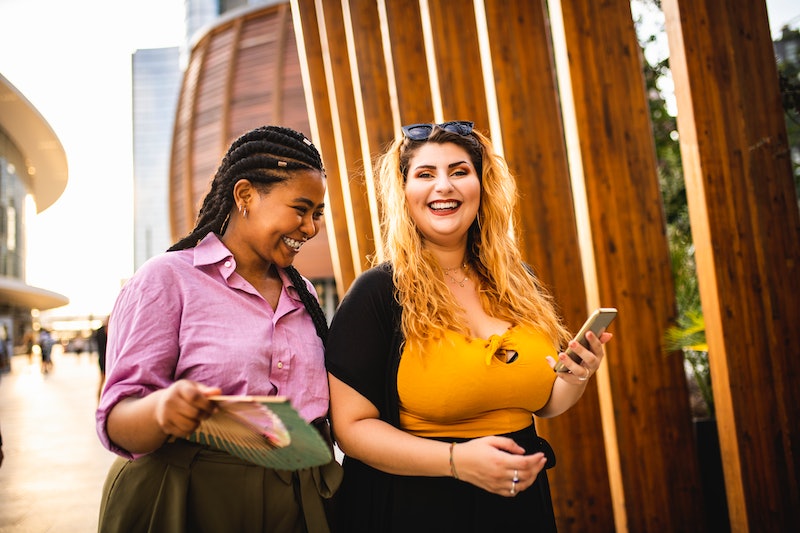 Body positivity seems like a good thing: you have to have a body, so why not be positive about it? But backlash from celebs and influencers has shown how “body positivity” isn’t doing it for everyone. In an April TikTok, singer Lizzo said that the mainstream body positivity movement doesn’t “protect and uplift the bodies it was created for and by” — suggesting that terms like body neutrality or body acceptance might be more helpful than positivity.

“Terminology always changes and movements are not static,” says Micki Krimmel, the CEO and founder of Superfit Hero, a plus-size activewear company that also helps to connect people to body positive personal trainers and gyms. “As ‘body positivity’ has gone mainstream and lost some of its power for folks in marginalized bodies, other terms have come up to replace it like ‘body neutrality’ and ‘fat acceptance.’”

Where mainstream body positivity has a kind of “I am unconditionally thrilled with my body at all times” vibe, body neutrality is more “I have a body, and so does everyone else.” Fat acceptance, or body acceptance more broadly, espouses “I have a body, and I may not always love it, but it’s always mine.” Whether you’re familiar with all these terms or just getting caught up, you’re not the only one wondering what the differences are between body positivity, body neutrality, and body acceptance.

What Is Body Positivity?

The phrase “body positivity” is about taking joy in your body for exactly what it is, no matter what society says about it. It was born out of the 1960s movement for fat liberation, led by fat and queer Black women and femmes. Now, videos with the hashtag #bodypositive have nearly four billion views on TikTok.

Carrie Beth Langham, the product manager at Superfit Hero, tells Bustle that body positivity was an important force for her as she healed from experiences with eating disorders, body dysmorphia, and self-harm. “It introduced me to the concept of loving and celebrating my body,” she explains. But it’s not easy to constantly be your own hype person. “Over time, I found that the body positivity mindset was difficult to maintain at all times — to be constantly happy and celebratory about my body every hour of every day — it felt like a task,” Langham explains. She isn’t alone in feeling this way: in 2019, Demi Lovato told iHeart Radio, “I don't always feel positive about my body. Sometimes I do not like what I see,” they said. “[But] I don't sit there and dwell on it.”

“It is OK to not feel ‘happy’ or ‘neutral’ or ‘OK’ all the time with the bodies that we have,” explains licensed clinical mental health counselor and eating disorder counselor Melissa Carmona, M.S., N.C.C., L.C.M.H.C. People who are fat, disabled, trans, undocumented, and/or BIPOC often receive messages that their bodies are wrong, Carmona says, and “may find the term 'positive' as invalidating to their lived experience.”

That doesn’t mean that body positivity is over. “Right now because it’s the most mainstream, ‘body positivity’ is often the gateway term for folks new to the movement,” Krimmel explains. “Hopefully, once you’re enticed into the movement by whatever term brings you in, you quickly realize that the real problem is much larger than personal body image. The reality is that folks in fat bodies face exclusion and discrimination in medicine, travel, wellness, and fashion.”

Different words have been slipping into conversations about body image instead of, or in addition to, #bodypositivity. Videos with the #bodyacceptance hashtag has garnered nearly 150 million views on TikTok, but it’s not interchangeable with body positivity.

“Body acceptance is really about getting to a place where I might feel like crap about my body,” Langham says. “But I ask myself why I was feeling this way, where this feeling was coming from, and challenge myself to think about how I can find peace in existing if nothing about my body changes,” Langham says.

In other words, Carmona tells Bustle that with body acceptance, you don’t always have to be thrilled with your body — but you can figure out how to accept it. “It may be you acknowledge from a non-judgmental or shameful lens, and instead do it from a flexible and curious lens,” she explains.

What Is Body Neutrality?

Body positivity and body acceptance aren’t the only options. Many people are now leaning into a philosophy of body neutrality — a term that’s been on the rise since the 2010s, as a 2017 New York Magazine story reported.

“It’s really about having a neutral relationship with your body without good or bad opinions,” Langham explains. “It’s about normalizing all bodies beyond yourself, to a point that we just don’t need to focus on them at all in any context.” Normalizing all bodies with body neutrality and acceptance includes fat folks, people of color, and trans folks in a way that body positivity might not.

Folks who no longer feel included by body positivity often embrace this neutrality, Carmona explains. “They may find it more helpful to acknowledge their body through a neutral lens — they do not love it or hate it, they just acknowledge it for what it is and what it does,” she says.

Kyle, 32, a self-identified fat trans guy, says that body neutrality is an important part of their journey. “Accepting my body as a fat trans person doesn’t mean I have to perform some kind of happiness and perpetual self-satisfaction whenever I post a selfie,” he tells Bustle. “I’m not being ‘brave’ or an ‘advocate’ by posting me and my back rolls. I’m just existing.” Kyle explains that “just existing” is a privilege that people with variously marginalized identities often don’t have, so body neutrality is a way to remind people that they can take up space.

For Kyle, body neutrality is a way to embrace their fat trans self without having to deny their complicated and sometimes painful relationship with their body. “Body neutrality doesn’t mean I don’t have dysphoria, and it doesn’t mean there aren’t things about my body that I want to change,” they explain. “It just means that in the face of violence from white supremacy, ableism, and transphobia, Black and brown women and femme people have carved spaces where we deserve to exist and to claim joy and angst and sexiness and change on our own terms. And that’s pretty awesome.”

Micki Krimmel, the CEO and founder of Superfit Hero

More like this
An Honest Review Of The F1 Pro Massage Gun
By Carolyn Steber
How To Do A Rocking Plank In Perfect Form
By Carolyn Steber
The 9 Best Exercises For Inner Thighs, According To Trainers
By Carolyn Steber
I Tried TikTok’s Favorite Menstrual Cup & Here Are My Honest Thoughts
By Meguire Hennes
Get Even More From Bustle — Sign Up For The Newsletter