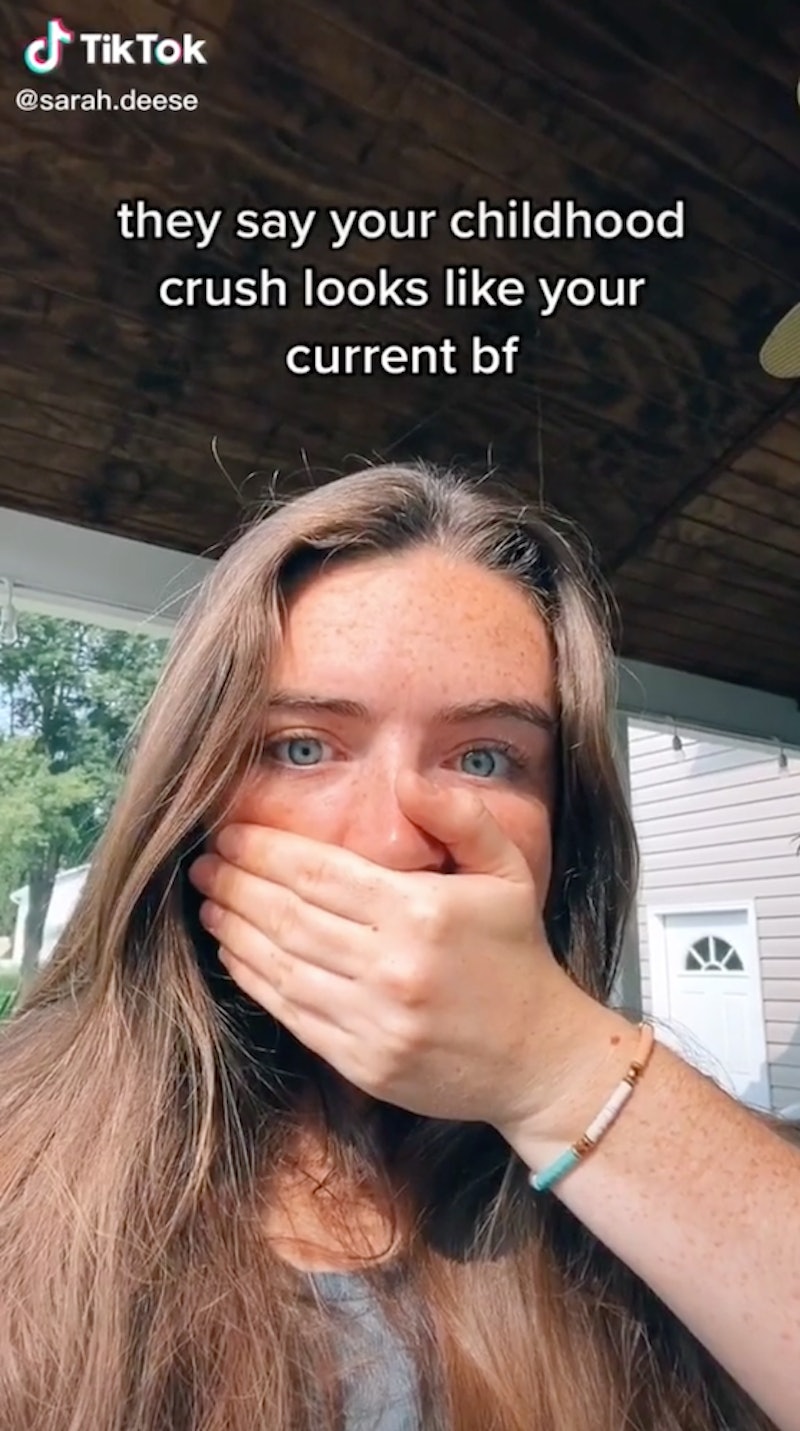 Think back to your childhood crush, whether they were an actor, the guitarist in your favorite band, or even a cartoon. You know, that person (or character) you couldn't stop pining away for, so much so that you ordered all their merch, taped pictures of their face to your bedroom walls, and wrote their name with little hearts on all your notebooks. (You might've even planned a hypothetical wedding, but that's neither here nor there. Cough.)

While most of the responses are spot-on, and show that the person's current partner is a carbon copy of their childhood crush, there are also plenty of videos where the opposite occurred, as well as other hilarious takes on the trend. (See the Casper video below.)

For the most part, though, the challenge has revealed that the traits we find hot in fifth grade seem to be the traits we will find hot forever, however weird that may seem. Here, a few prime examples, starting with one that is eerily accurate:

TikTok user @caesthetically crushed hard on Justin Bieber back in the day and is now dating his doppelgänger. As @gutebesserung3 said in the comments, "Girl you said copy paste," and I couldn't agree more.

Then we have @_banessaraya, who also copy/pasted her childhood love interest, rapper Jackson Wang, and is now dating a man who could literally be his twin.

Beyond a love for boyish good looks and chiseled jawlines, however, the trend also shows that we seem to fall for people who share a similar essence, whether it's due to cool style, body language, talents — or all of the above.

Perhaps that's why the childhood crush challenge totally works for cartoon characters, too. TikTok user @seabreezie's partner was head-over-heels for Kim Possible as a kid, and guess who @seabreezie looks like today? Kim Possible.

Your current partner might be the spitting image of your fave cartoon. But since fictional characters tend to be cool in lots of aspirational ways, they're not only crush-worthy, they make really great templates for a future partner. Maybe that's why there's more than one video with a Ron Weasley lookalike.

Set to a Robert Lilly remix of "Shake It" by Metro Station — which, for whatever reason, makes everything 10 times funnier — the challenge has, in true TikTok fashion, completely spiraled out of control. There are countless jokes based on the trend, like this one from @sarah.deese, which is just too real:

Whether you end up with Casper, or a straight-up Justin Bieber copy, you just have to laugh at how accurate this trend has turned out to be.