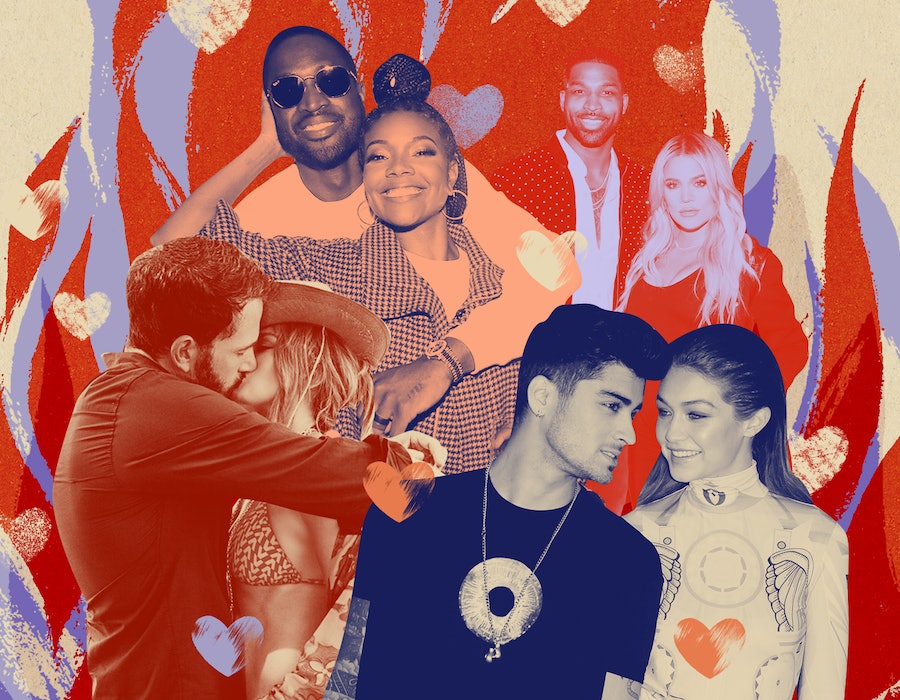 My best friend’s parents dated in their teens, spent their twenties on different coasts, then reunited in their thirties to tie the knot, buy a house, and start their family. Their love story was, and still is, a glimmering hope my friends and I call upon during our own messy breakups. As we put our ex’s stuff in cardboard boxes, and watch old lovers charge their new flames for sushi on Venmo, we take solace in knowing, maybe this isn’t actually The End. Sometimes — as Jennifer Lopez and Ben Affleck’s high-profile reunion has illustrated this year — what you need to really be together is a little time apart. Or in their case, a lot of time apart.

After weddings, kids, divorces, movies, and one iconic Superbowl halftime show, the Hollywood Star-crossed lovers found themselves back together, and eventually on J.Lo’s grid. Now that Ben’s been spotted reportedly shopping for rings, Bennifer 2.0 is proving recycled relationships really do have the potential to be different the second time around. Yet Anita Chlipala, couples counselor and author of First Comes Us: The Busy Couple's Guide to Lasting Love, explains that for a reunited relationship to work, all parties involved must agree to change the dysfunctional patterns that led to the breakup in the first place.

“What did they do during the time they were apart?” Chlipala tells Bustle. “If they don’t do any work to improve their relationship, a break is not going to do any good.”

As the Joni Mitchell song goes, sometimes you don’t know what you’ve got until it’s gone. Being alone, or just having time apart from an ex, may help you realize things you took for granted or didn’t appreciate enough in the relationship, Chlipala says. Additionally, if you two split because you were in different stages of life, time apart may allow you to catch up to each other — or at least develop better communication skills.

From reunited high school sweethearts to reconnected dog parents, Bustle spoke to four couples who got back together after time apart, and how they changed in the interim.

Lucy and Kevin met in biology graduate school in 2013 and started dating the following summer. “We dated until early October, at which point he broke up with me, saying he needed to figure his life out,” Lucy says. “He was feeling like he wasn't going to make it in science.” Shortly after the breakup, Kevin dropped out of the grad program and moved in with a new girlfriend. “I was heartbroken,” Lucy says. “It really shook me up.”

As she finished her Ph.D., Lucy knew furthering her career meant moving far from the area. She dated casually, having temporary flings. But she still questioned what happened with Kevin. “It nagged at me, why had he broken up with me, [saying that] he didn't want to get serious with someone, only to get super serious with someone not long after? What was wrong with me? What was wrong with him?” she says.

Yet, in 2018, after finally watching a TV show that Kevin had always suggested about a couple that gets back together after years apart, Lucy messaged Kevin, and the conversation started slow.

As they started talking more, Lucy laid it all on the table. She asked why he called things off with her just to move in with someone else. He admitted he thought he wasn’t good enough for her and consequently self-sabotaged their relationship out of fear.

“I told him it was unfair for him to decide for me that he wasn't good enough — I thought he was good enough — and further, it wasn't fair to his girlfriend at the time to make her his second choice like that.”

Dr. LeslieBeth Wish, clinical psychotherapist and author of Smart Relationships, says that being transparent, even if it’s uncomfortable, is imperative for rebuilding your relationship even stronger. “Explain to yourself key questions — what was going on in each of our lives when we met? Was either one of us over-correcting?” Dr. Wish tells Bustle. “One of the scariest tasks in life is to undergo honest, deep, emotional self-examination.”

Later in 2018, Kevin parted ways with the other girlfriend. Being honest about his insecurities ultimately made him more confident, and soon Kevin started building a life that made him feel good about himself — including being with Lucy.

“We started dating again, and the rest is history,” she says. “In fall 2020, he proposed, incidentally, six years to the day after he broke up with me. We were married in late June of this year. I couldn't be happier, honestly.”

For BP, time apart from her long-term partner Matt allowed her to focus on getting the mental health care she needed and develop healthy coping mechanisms on her own. With these healthy changes in place, the couple had a more solid ground to rebuild their relationship.

The couple met working at a grocery store when BP was 28. After exchanging numbers and Matt sending some rhyming texts, the pair went on a date, and immediately hit it off. They happily dated for three and a half years, when BP got a big promotion. The new job brought a lot of pressure, 50+ hour workweeks, and a 45-minute commute. On top of all that, BP hit a deep depressive episode.

“When [we were] discussing moving to be closer to my work I felt his hesitancy,” she said. “I asked if I should be looking for a place to move myself, and he said yes.”

For the next six months, the pair split up and lived separately, though they met up to care for the two dogs they had together.

When an accident totaled BP’s car, she stayed with Matt to heal up. As she physically recouped from the accident, BP prioritized her mental health as well.

“I got mental health help and worked really hard on healing the hurting pieces within myself that were broken,” she says. “When I thought I could do right by him I told him directly that I wanted to be back together.”

The pair took it slow and started going on dates again. “It was like we had taken this great refreshing time, then started again with new zeal, BP says. “We made a goal to buy a farm together, and it’s been great ever since. We've been together for six and half years now, and are still very much in love.”

Dr. Wish explains that over time, everyone’s lifestyles and values change. Getting back with an ex, and really making it stick, demands being in tune with your priorities. If there were specific reasons you broke up the first time, you should be able to identify concrete changes that you and your partner have made to address those core issues, according to Chlipala. “There should be something — a different way of thinking, healthier beliefs — growth that can better the relationship.” Did they start therapy or antidepressants? Did you have a job change that allows you more free time? “You should be able to answer, in detail, ‘What will be different this time around?’” she says.

Ophelia, 23, & Leviathan, 30, Started Dating, Moved In Together, Broke Up, And Are Now Engaged

Ophelia (they/she), and Leviathan (they/them) have always had a polyamorous relationship. The time they spent apart wasn’t so much about seeing other people as it was learning to better communicate with each other.

“We met through a mutual friend at a Halloween party,” Ophelia says. “I was actually dating the host, and my partner had dated them in the past. My partner and I started officially dating about a month and a half later, and were together a little over a year and a half.”

When Ophelia moved in with Leviathan and their roommates, tension arose. The pair wasn’t ready to live together and struggled to mediate normal relationship conflicts. “We broke up because we couldn’t communicate super well,” Ophelia says. “We both have trauma from past relationships that made it difficult for us to understand each other.”

After moving out, and spending a couple of months apart, the pair started talking again, diligently trying to be patient and compassionate when they spoke.

Nicole Richardson, LMFT and couples counselor, describes entering a relationship with a renewed sense of accountability, expressing the importance of self-awareness and compassion in moving forward.

For Ophelia and Leviathan, owning their mistakes and finding better ways to deal with conflict in their relationship allowed them to move forward.

“We like being together and agreed to put in the effort to make this a successful relationship,” Ophelia says. “Kind of a ‘this will be hard but you’re worth that.’ We’ve been together almost two years since then, and got engaged in May.”

Jay, 24, and M., 23, Dated In High School, Broke Up For Seven Years, Are Now Casually Seeing Each Other

Being realistic about what each partner is able to give while still being flexible has helped high school sweethearts Jay (they/them) and M. (they/them) reunite.

The pair met in high school in 2012 playing competitive tennis. Though they went to different schools, they were top players in their respective leagues. They got to know each other from tournaments and championships, and ended up dating for about a year.

Though they were young, Jay remembers how safe M. made them feel. Even as teenagers, the pair could talk about gender and identity, childhood trauma, and goals they both had for the future. Citing the pressure of competitive tennis, college in different cities, and family tension as contributing factors to the breakup, Jay says they never stopped thinking about M. — even after years of not talking, and living far away from each other.

But like a new Lorde record finally releasing after so many years, the spark reignited. Months into the COVID pandemic, M. started reacting to Jay’s Instagram stories about their at-home workouts. The DMs turned to texts that eventually turned to long FaceTime calls, ending when the sun started to rise. After a few weeks of talking, the pair tried to make their reunion official but found the distance between them made it difficult.

When getting back together with an ex, Chlipala encourages this type of self-awareness and transparency.

“You both have to be very open and honest about what it is that you want and where you can be flexible,” she says. “You also have to be very specific so that you know what you’re signing up for.”

For now, they enjoy being back together in a more fluid, casual sense. They have date nights, steamy weekend getaways, and focus more on having fun together than fitting into each other’s plans.

Jay has a steady 9-5, a dog, their own apartment, and are saving up to buy a house. M., on the other hand, took time off school and has been doing odd jobs and living in different sublets across the west coast. They’re not as structured as Jay, and not as ready to settle down. Because the pair is in different places, starting a Serious Monogamous Relationship wasn’t in the cards.

​​”We tried, but due to being in different places in our lives it just wasn’t possible to maintain a ‘relationship,’” Jay says. “We’re not officially dating. We’re close though. “I guess you’d label it a ‘situationship.’ I don’t know, it works for us.”

More like this
30 Clever Ways To Slide Into Your Crush's DMs
By Griffin Wynne, Carolyn Steber and Lexi Inks
Are Quality Time & Gift-Receiving Love Languages Compatible?
By Lexi Inks
The Differences Between Polyamory & Open Relationships
By Lexi Inks
Breeding Kinks Have Been On The Rise Since Roe V. Wade Got Overturned
By Lexi Inks
Get Even More From Bustle — Sign Up For The Newsletter