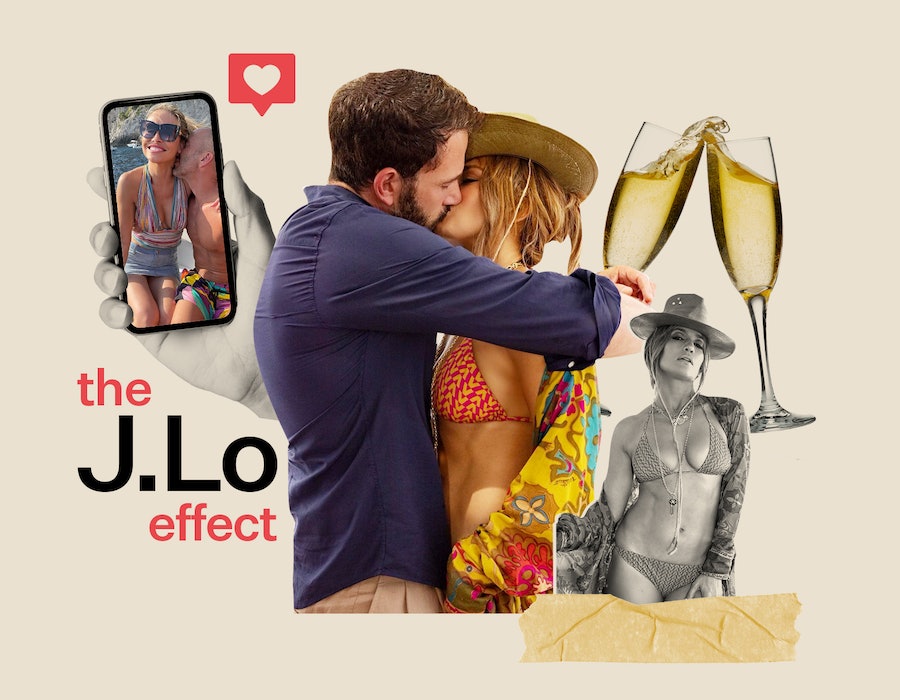 Some will say that social media isn’t real life, and in most tangible ways, it is not. Yet, it is a portal into the life a user chooses to share with their followers, and in some cases what they choose not not to share — like, a candlelit omakase dinner pic, a mirror selfie from a hotel room, or perhaps the same unfamiliar dog making an appearance over several days or weeks. After enough of these snaps, you may start to wonder, “Wait a minute, I thought their building didn’t allow pets... ” or “Who stays at a hotel in the city they live in?” and finally, “No one goes to omakase alone! Is Jessica seeing someone?!” I’m here to tell you: yes, obviously.

Look, everyone’s entitled to their private lives and whatnot. Keeping things under wraps until you feel solid enough with your new beau to show the world that you have a new person and aren’t you so cute together (yes) makes sense. In fact, it’s become more and more of a thing to post little social media teases, hinting at the behind-the-scenes nature of your developing romance on your Instagram stories, beta testing boyfriend content on your green circle audience first. As a respected member of many green circles, I have witnessed this first hand, often replaying a slide featuring an unknown giggle or muffled coo in the background.

Perhaps you’ve noticed your friend suddenly posting from all these very picturesque sites—botanical gardens, museum steps, or candlelit jazz club tables dotted conspicuously with not one but two cocktail glasses. And maybe your friend is in the photos (with a tiny photographer credit tag) or maybe it’s just a little vibe vignette, no humans in sight, but with two long shadows stretching across a beach sunset. These may all very well be signs of your friend’s secret boyfriend, pre-debut. So you send this friend a text to ask “What are you up to?” and they mysteriously take a leisurely time to text back “not much, just got home” even though you know for a fact that their phone is never not in their hands. Curious!

As a pathological secret girlfriend, I feel confident in my ability to spot all the signs of your not-so-secret boyfriend. I get it. Because I too gristle at the idea of parading my newfound plus-one all over your feed while wrestling with the glee of having a regular partner-in-boning. You don’t want to post an official reveal too soon and potentially jinx the relationship’s development, popping the bubble of the blissful honeymoon phase.

You want to get that reveal just right—maybe a little cheeky, but earnest enough to get the message across without being corny. In this age of performative coupledom, there are many routes to “making it official,” which feels very much like a requisite social media custom if you subscribe to that sort of thing. You want to get a good one in before relationship reveals become too cringe for content and you lose the opportunity for good (my forecast is any day now, but that’s just my single ass betting on minding my own business). Go on and give the people a tag to tap!

Sometimes who is being revealed can be a bit of a plot twist. I mean, I don’t know of an ex-ex-boyfriend reveal that was better received than Bennifer 2021 (at the end of a cheeky birthday carousel, no less!). It’s a feat mere civilians cannot hope to accomplish with such overwhelming support. Or in the case of Chrishelle Stause’s attempt to piggyback off “the J.Lo effect,” the who is actually... her boss! (It’s not the same, Chrishelle, but good try).

The boyfriend reveal is kind of like Christmas morning — it’s the big event but it’s actually not the best part. When you think about it, the holiday season is really what people enjoy most. The festive lead-up. It’s that period of tension, the are-we-aren’t-we of it all when your secret boyfriend energy is at its most potent. You might think you’re being sneaky, but your followers can tell.

Listen, you can amuse-bouche all you want with no official reveal — a chaotically evil move, and I respect it fully. But on behalf of your followers (and those stalking you from burner accounts) you can only post so many cryptic love notes in expiring posts before your loyal digital audience demands satisfaction. I know what you’re up to, Jessica. And I want you to know that I’m very happy for you, and he’s a very lucky dude. Now post it on main, you coward.

More like this
30 Clever Ways To Slide Into Your Crush's DMs
By Griffin Wynne, Carolyn Steber and Lexi Inks
Are Quality Time & Gift-Receiving Love Languages Compatible?
By Lexi Inks
The Differences Between Polyamory & Open Relationships
By Lexi Inks
5 Sneaky Signs That You're Dealing With Narcissistic Gaslighting
By Lexi Inks
Get Even More From Bustle — Sign Up For The Newsletter