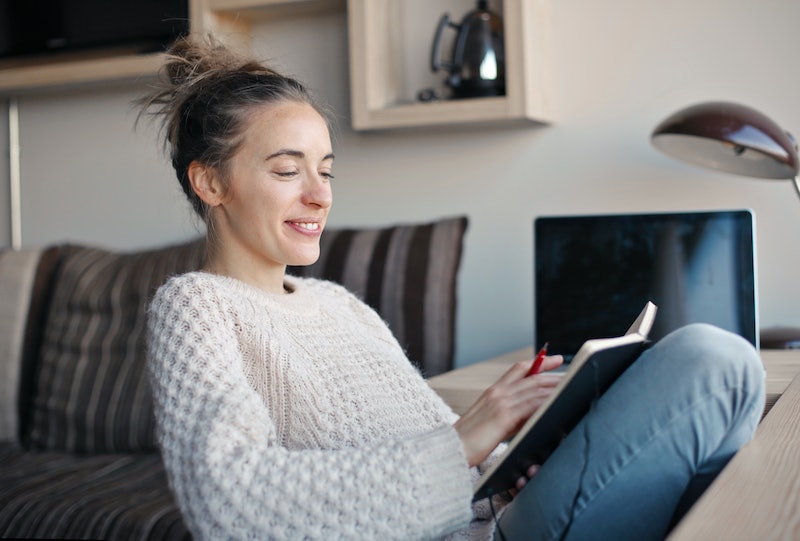 Nothing feels more disorienting or upsetting than losing someone from your life, and it's even worse if it happened in a dramatic way. But rest assured there are plenty of ways to heal from a bad breakup, and eventually get your life back on track.

If you've only gotten as far as crying in bed, you're actually already off to a good start. "The single most important stage in healing is also the most uncomfortable: allowing the messy mix of emotions that follow an important loss, including sadness, confusion, and anger," Dr. Seth Meyers, a licensed clinical psychologist and eharmony’s resident relationship expert, tells Bustle. If you need to cry go ahead and cry, as it'll help you process and release tough feelings.

And if you've been tamping them down, allow yourself the time to assess how you've been coping. Meyers says people often make the mistake of avoid their feelings when they're going through a breakup. But that actually backfires, because "doing so causes the feelings to linger and to be carried into a future relationship without even being aware of it," Meyers says. If you've been struggling to open up, talking to a friend or even going to a therapist can help you get it all out.

Another important aspect of the healing process is cutting off all contact with your ex, if possible, even if it feels painful or strange. This includes no longer texting, calling, asking mutual friends what they've been up to, scrolling through their social media, and so on. Knowing will only keep you stuck in the past, so resist the urge to check up on them simply out of curiosity or longing.

"The first two weeks of no-contact are the hardest," Caroline Madden, PhD, a licensed marriage and family therapist, tells Bustle. You'll be tempted, but don't even check just "a little," Madden says. Instead, go cold turkey by deleting numbers, unfollowing, and ignoring messages. Once you do, she says you'll start feeling noticeably better in about a month.

Distracting yourself will be a big help, both when it comes to managing emotions, as well as keeping yourself from texting/calling/scrolling. "The goal is to feel your feelings but not to live in them," Meyers says. "Each day following a breakup, create a plan to spend quality time with friends or family members who make you feel loved and supported." Whether it's a fun activity or simply meeting up for coffee, put it on your calendar and stick to it.

"Talk through your feelings with your support network," Meyers says, "but after some time [...] be disciplined about trying to focus on other things." Chances are you won't feel like talking about anything outside the breakup, but allowing the conversation to flow in other directions will give your mind a much-needed break, while also making room for you to get excited about other aspects of life.

Meyers says it's also helpful, especially during the toughest times, to focus on taking really great care of yourself, whether that means doing yoga, making art, or meditating. "Because breakups pull for a sense of loss, countering that loss with the hopefulness of good self-care helps to reduce negative feelings," he says.

It's tough, for sure, but keep reminding yourself that you will come out the other side. "Take things one day at a time," David Strah, MA, LMFT, an author and licensed psychotherapist based in Los Angeles, tells Bustle. "Think back to other times in your life when you were upset or experienced a loss. How did you get through it? Remind yourself that you survived and probably even thrived."

Again, though, if things get too tough don't hesitate to bring in the help of a therapist. "Sometimes family and friends just can’t provide the support and clarity that a mental health professional can, especially if a breakup necessitates significant and overwhelming changes in our lives," Strah says. They can help you manage emotions, restructure your schedule, and even process the long-held beliefs you likely developed while with your ex, which can be invaluable when it comes to understanding the relationship, the breakup, and how to move on.

"Remember, your life is not over because the couple part is now over," Strah says. Things will be easier and you will get your life back. It may take some time and effort, but it's always possible get through even the toughest of breakups, and feel OK again.