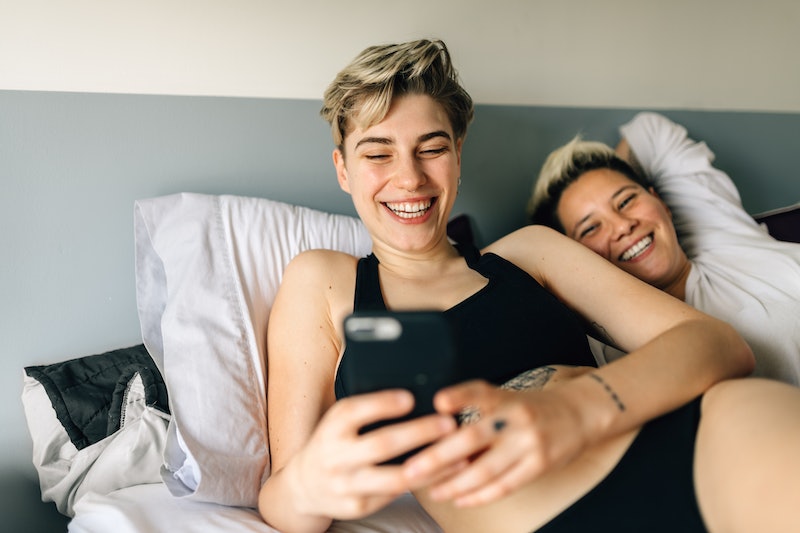 If you’re sort of dating someone but couldn’t possibly begin to define what you mean to one another, you’re probably in a situationship rather than an actual relationship. Some defining characteristics? Ongoing frustration, stress, and near-constant confusion as to whether or not you’re a couple.

To put it simply, “a situationship is when folks engage in behaviors and act as though they are dating but do not make a commitment to each other,” Dr. Sabrina Romanoff, a clinical psychologist, tells Bustle. In some ways, the fact everything’s up in the air can be beneficial, especially when you’re still deciding what you want. But it can also be hurtful.

In situationships, the terms of commitment are almost always defined by one person and not mutually agreed upon, Romanoff says, meaning someone’s needs go unmet. That’s why you might feel as if you don’t see the other person often enough or hear from them often enough, but are at a loss as to whether or not that’s OK because you aren’t technically “dating.”

You’d like to commit (and feel like you probably will), but it hasn’t happened just yet. And that leads us to the difference between a situationship and friends with benefits.

A Situationship Vs. Friends With Benefits

The whole idea of friends with benefits (FWB) is that you’ll remain just that — friends. You purposefully keep things surface-level by having fun and steering clear of heavy topics, including anything related to big feelings or the future. And as a result, FWB lacks the emotional depth people often have when they're in a situationship, Antonia Hall, a transpersonal psychologist and relationship expert, tells Bustle.

Basically, this particular relationship is all about sex, AKA the “benefits.” You might be pals who have agreed to hook up with each other whenever you’re bored or single. Or maybe you matched online and agreed before ever meeting up to keep things casual. “In an FWB relationship, it is usually mutually understood that the two people are just hooking up,” Hall says, “and nothing more is expected.”

You probably won’t meet each other’s friends or families. You won’t call each other with important news. And you certainly aren’t “partners.” That said, an FWB could become a situationship if someone catches feelings or you start doing more than hooking up. At that point, the lines will quickly blur, and you’ll end up in a stickier, um, situation.

What Is A Situationship Vs. Relationship

The main difference between a situationship and a relationship is that you’ve had a conversation and defined your commitment. This will likely happen after it’s become clear you share similar values, interests, and goals, Hall says, and have decided you’d make a good couple and want to take that next step.

At this point, there will be no more guessing. No more nebulous “are we or aren’t we?” You’ll officially take on life together. You’ll support each other, share your time, and know where the other stands. You’ll become a major part of each other’s lives, Hall says, and you’ll start making plans for the future.

How To Get Out Of A Situationship

Since lack of communication is one of the defining qualities of a situationship, the best way to figure out what’s happening is by — you guessed it — communicating. “Be honest about what you want,” Romanoff says. “Do you really want to be in a committed relationship, or do you want to have fun with this person?”

While a little bit of uncertainty is to be expected, especially when you first meet, talking about your needs early and often is the best way to skip over “situationship” messiness and confusion.

It’s also important not to ignore red flags, which you can do by taking what the other person says and does at face value. “The best strategy is to be honest with yourself and the reality of the other person’s behaviors and intentions,” Romanoff says.

Do they take the initiative to reach out? Do they ask personal questions and care about your answers? Do they act the same way in person versus via text? As Romanoff says. “Usually partners are in ‘relationship mode’ in person and switch to ‘casual mode’ while apart through text. Use the consistency of their behavior when they are away from you as a gauge for interest.”

If you want commitment and they don’t, end it. If you want FWB and they don’t, go ahead and call things off. Relationships, whatever kind they may be, only work when both people are on the same page. So focus on being honest and talking to each other, and you’ll hopefully be able to avoid a situationship.

More like this
14 Underrated Date Ideas To Try With Your Partner
By Lexi Inks
Bumble's "Compliments" Feature Lets You Message Before You Match
By Lexi Inks
Are Capricorn & Aquarius Compatible In A Relationship? Astrologers Weigh In
By Kristine Fellizar
This Company Will Send STI Tests Right To Your Door
By Lexi Inks
Get Even More From Bustle — Sign Up For The Newsletter