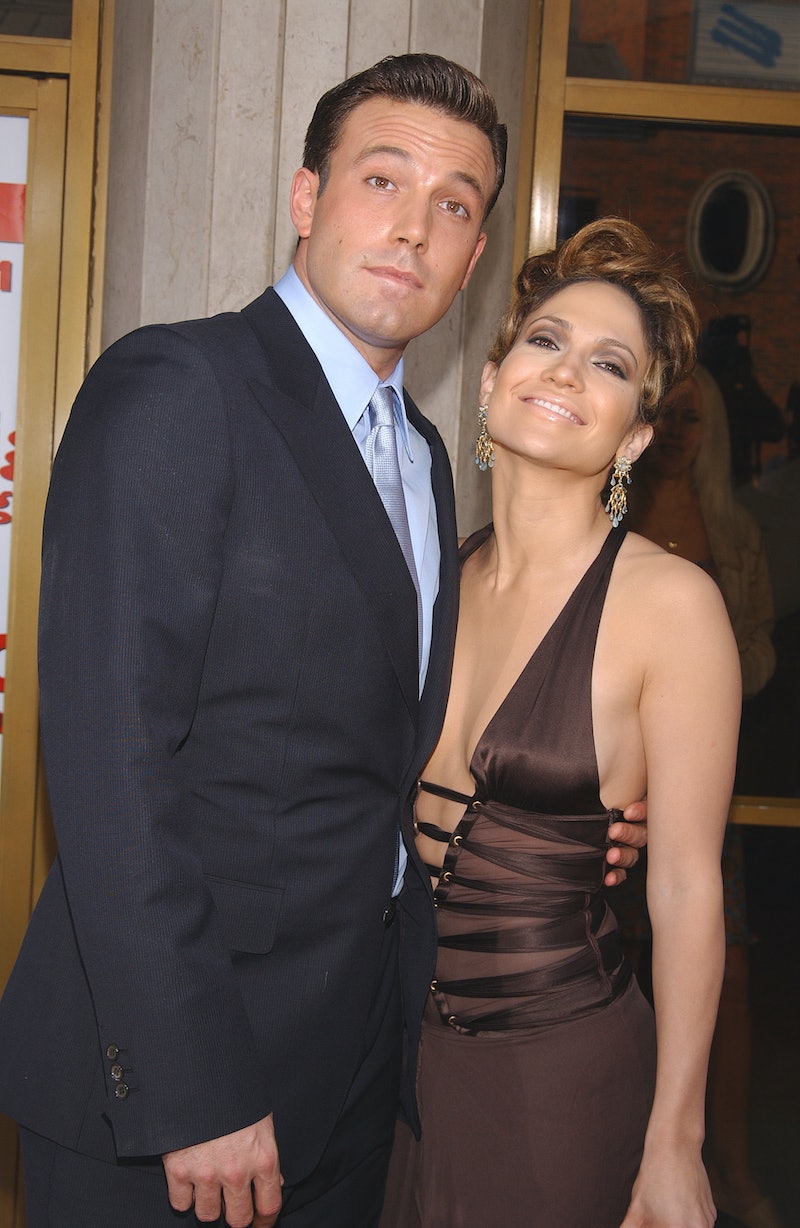 Roughly one month after Jennifer Lopez made her relationship with Ben Affleck Instagram official, the Justice League star might be thinking about popping the question. According to Page Six, the 49-year-old actor was spotted shopping for an engagement ring on Monday, Aug. 23, at Tiffany’s in Century City, California. Per the outlet, Affleck was photographed browsing the store with his mom and his son Samuel.

If Affleck is, in fact, planning on proposing to the “Love Don’t Cost A Thing” singer, this wouldn’t be the first time. After meeting on the set of Gigli in 2002, Affleck asked J.Lo to marry him in November of that same year. At the time, he reportedly presented the pop star with a 6.1-carat pink diamond by Harry Winston that cost a whopping $2.5 million.

After the proposal, Lopez opened up to Diane Sawyer about the overwhelming happiness she felt in the moment. “I walk in, and I was just overwhelmed. I wasn’t expecting it, and I was just like ‘Oh my God,’” she said. “I had cried a lot over sadness over the years. And for the first time in my life, I cried incredible purging tears of happiness. It was the most cleansing feeling and the most wonderful feeling I had ever had.”

Unfortunately, that feeling didn’t last. In September 2003, a day before their wedding, the couple announced that they would be postponing their nuptials. “Due to the excessive media attention surrounding our wedding, we have decided to postpone the date,” they said in a joint statement. “When we found ourselves seriously contemplating hiring three separate ‘decoy brides’ at three different locations, we realized that something was awry.”

By January 2004, Bennifer 1.0 was over. “I am confirming the reports that Jennifer Lopez has ended her engagement to Ben Affleck,” the “On The Floor” singer’s rep told the Chicago Tribune. “At this difficult time, we ask that you respect her privacy.” J.Lo went on to marry Latin music star Marc Anthony in 2004 while Affleck tied the knot with Jennifer Garner one year later. Both couples went on to expand their respective families.

Ultimately, both Affleck and Lopez’s marriages did not work out and both stars went on to date other people. In April 2021, J.Lo’s split from baseball star Alex Rodriguez paved the way for Bennifer 2.0. Shortly after their breakup, Page Six reported that Affleck was picked up in a white Escalade SUV that belonged to Lopez and was taken to her home. The following month, they reportedly vacationed together in Montana and were spotted kissing at Lopez’s gym in Miami.

In late May, Us Weekly confirmed that the Bennifer 2.0 was a go. “Jen and Ben are both very happy with each [other] and are excited to see where the relationship goes,” a source told the magazine. “They are full-on dating and very happy together.” Lopez, however, didn’t start talking about their rekindled romance until fairly recently. “I’m super happy,” J.Lo said in a July interview with Zane Lowe for Apple Music. “I know people are always wondering. How are you? What’s going on? Are you okay? This is it. I’ve never been better.”

A few weeks after telling Lowe that this is the “best time” of her life, Lopez celebrated her 52nd birthday with a carousel of photos on Instagram. In one photo, the couple shared a kiss. And now that a month has passed since their social media debut and Affleck has been spotted ring shopping, it’s safe to say that these two might be more serious than anyone realized. At this point, it remains unclear when (and if) the actor will actually pop the question, what we do know is that we’ll be keeping close tabs on this couple for the foreseeable future.

More like this
Ben Affleck Wrote A 12-Page-Long Speech For Wedding To Jennifer Lopez, Says Kevin Smith
By Brad Witter and Radhika Menon
Who Is Nick Cannon Dating & How Many Kids Does He Have?
By Jordyn Tilchen and Radhika Menon
How To Apply For 'Survivor' & Tips On How To Get Cast
By Meg Walters
Here’s Everything You Need To Know About Operation London Bridge
By Bustle UK
Get Even More From Bustle — Sign Up For The Newsletter