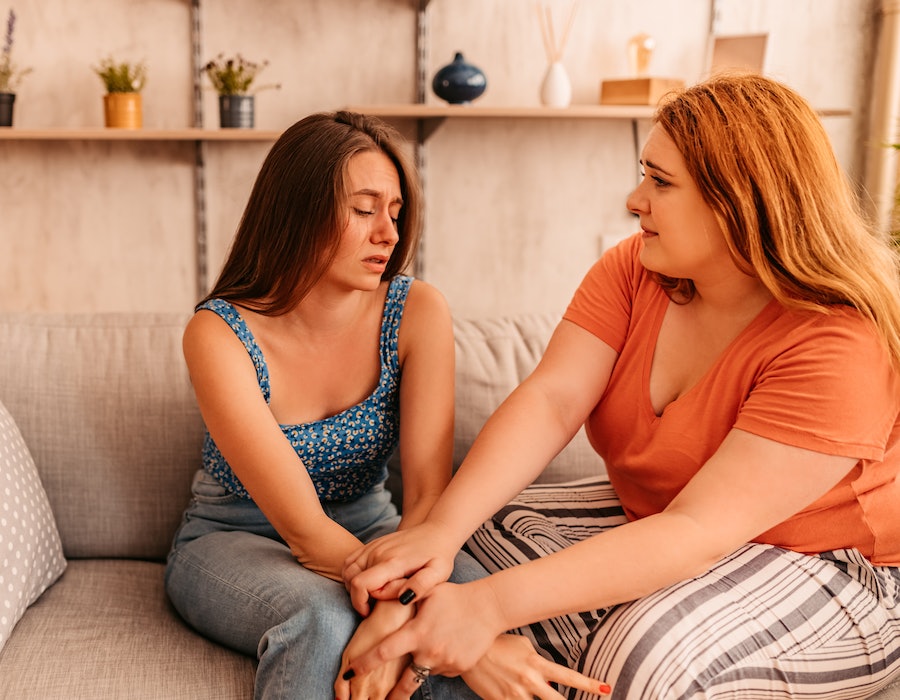 You don’t always like your friend’s partners. Whether they only talk about protein powder, exclusively listen to Morrissey, or never remember your name, your sweet, beautiful bestie doesn’t always pick winners. However, there’s a major difference between your friend dating someone tacky whom you dread spending time with versus someone harmful who’s potentially threatening their mental wellbeing.

According to Angela Lee, the director of Love Is Respect, the National Domestic Violence Hotline’s dating violence prevention project, while you may think of “abusive relationships” as strictly physical, they’re really more about power and control. If your friend’s partner calls them incessantly when they’re out or makes them feel bad about themselves and beg for forgiveness — there may be something dangerous going on. (You can take a quiz on being an ally for someone to really check.)

“Anything that takes away someone’s control or puts them under the power of someone else could be considered abusive,” Lee tells Bustle.

But when your bud is spending time with someone manipulative or emotionally abusive, it can be hard to know how to intervene. Jumping in unprompted with a “This dude sucks” can put them on the defensive.

Amelia Peck, a licensed marriage and family therapist, says when aiding a friend through an emotionally turbulent relationship, the key is to be supportive. While you may want to send their partner off in Elon Musk’s rocket, Peck shares it’s imperative to center your concern around care for your friend, not bashing their partner. “Support them when they’re ready to take action, but don’t push them,” Peck tells Bustle. “Share how you experience their partner and concerns you have, but don’t be too quick to force your opinion.”

If You Witness The Partner Crossing The Line IRL

You may not like the way your friend’s partner dresses or chews the ice out of their drinks. But if your friend is happy and clearly isn’t in any physical or emotional danger, your opinion on their partner’s “vibe” doesn’t really matter. However, if you see your friend’s partner yelling at them in a bar or insulting them in a car full of people, Peck says it’s time to step in.

“When you see gaslighting or emotional abuse happening in public, think, if someone is willing to do this in public, what happens in private?” Peck says.

When reaching out about a shaky encounter, be supportive, but share your side of the story. “Ask them about what you saw,” Peck says. “Say, ‘Your partner said you [did this], but I didn’t see it that way.’”

Lee continues that one of the most devastating impacts of gaslighting is that the person experiencing it starts to distrust themselves and question their own perception of what’s happening. What’s worse, your friend probably doesn’t even realize it’s happening, they just feel like they’re constantly messing up in the relationship.

“When you talk to your friend, start with curiosity,” Lee says. “Phrases like ‘I saw this happened; did it seem like that to you?’ If they are being gaslighted, their abusive partner is dismissing or challenging their thoughts. You can be a part of undoing that by welcoming and believing their thoughts and opinions.”

If You’ve Only Heard About The Suspicious Behavior

Even if you haven’t witnessed the behavior firsthand, but your friend often calls you crying about their partner, Peck suggests generally checking in with your friend. Find a time that’s good to chat, preferably in person in a comfortable setting, or over the phone when you both have time and privacy to talk openly.

When opening this conversation, Lee says to inquire about how the relationship is going or if they’ve noticed patterns with their partner’s temper or demeanor. “Focus on unhealthy or controlling behaviors you have observed, not on the partner’s character or them as a person,” Lee says. “Use phrases like, ‘I really care about you,’ or ‘I’m concerned about what I am seeing.’”

Raising your voice or villainizing the partner may cause your friend to take up the defensive on their behalf, which can cause further emotional harm for your friend.

“If they’re in a relationship with someone aggressive and then you aggressively tell them how to handle their partner, your message can get lost and can feel like someone else telling them what to think, do, or feel,” she says.

While it’s challenging to find the line between supporting and overstepping, Lee urges you to think about your friend in the long run. Establishing that you are a safe and non-judgmental person to talk to may enable your friend to come to you later when they are ready to leave the relationship.

“A supportive friend can help restore your power and agency,” Lee says. “It can go a long way to express support and care for them even if they don’t agree with you about what might be happening.”

While you may see someone yelling at you or making you feel bad about yourself as an instant eject button from a relationship, Peck urges you to be patient. “Even if someone is aware they’re experiencing gaslighting or some kind of abuse, it doesn’t mean they’re ready to cut the cord and run the other way,” she says. “Ask your friend what they want to do or are ready to do, and let them know you support them.”

If They Come To You For Advice

If your friend comes to you for help, you might feel a mix of emotions — happy or relieved they’re finally starting to ask for assistance, anger at the partner, or confusion about why it took so long. While you’re entitled to feel all your feelings on your own time, Lee says, but this conversation needs to be all about your friend.

“Thank your friend for sharing what is going on with them. Thank them for being open about their situation,” Lee says. “If they know you believe what they say, and you trust them to make their own decisions (even ones you might disagree with at the moment!) you can plant the seed that allows them to change the circumstances now or in the future,” Lee says.

Per Peck, it’s common for people who are in emotionally manipulative relationships to write off their pain or discomfort as just typical relationship ups and downs.

“What someone thinks is abuse in their life can be very subjective,” she says. “Often the justification is that the abuse hasn’t turned physical.”

Because relationships are so subjective, not everyone understands behaviors like gaslighting or guilt-tripping in the same way. If your friend grew up in an emotionally unstable environment or if they’ve experienced other forms of trauma, they likely won’t respond to emotional abuse in the same way you would.

Further, Peck says that emotionally volatile relationships often aren’t abusive or uncomfortable all the time. Your friend’s partner may shower them in gifts or compliments one week and then criticize them for an offhand remark the next. This emotional whiplash can make it even harder for your friend to understand what’s happening and can make them want to “bargain” for the relationship, or use the “happy” periods as a defense.

“Abuse often happens in cycles,” Peck says. “The ‘honeymoon’ period that follows can feel redeeming enough that the abuse feels more tolerable or not worth addressing.”

If your friend is downplaying their experiences, Lee suggests talking to your friend about what not-shady partners look like. “This could be an opportunity to help them envision what a positive, healthy relationship could be,” she says.

If You Catch Yourself Blaming Your Friend

When you find yourself giving the same advice over and over, Peck says it’s natural to get frustrated. If your friend hasn’t asked about your promotion in weeks or keeps canceling your plans to hang with their partner, you may start to think they’re complicit in the abuse.

“It’s a very common reaction to watch someone in a relationship, or series of relationships, where they’re treated poorly and seem to willingly stay or make excuses for the abusive behavior,” Peck says.

It’s important to remember that none of this is your friend’s fault. An abusive relationship can happen to anyone. According to the National Coalition Against Domestic Violence, 48% of people have experienced at least one psychologically aggressive behavior by an intimate partner.

“A period of ‘love bombing’ or intensely sweet and romantic behavior often comes before any negative behaviors start. The beginning of their relationship might be very different from what they are experiencing now,” Lee says. “The change isn’t their fault either.”

While you personally may be good at leaving losers on read, it’s not productive to compare your friend’s actions to your own. “The worst thing we can do is to blame someone who is being hurt, controlled, or gaslighted already by someone else,” Lee says. “Victim-blaming shuts them off from you, and isolating them is something their abusive partner is likely already doing.”

If you’re feeling burnt out, need them to ask you questions about your life, or aren’t available to them as a 24-hour resource — it’s OK to (gently) tell them. At the end of the day, you can’t control their behavior. All you can do is be there when they need you.

“It’s not for you to decide when the help comes,” Peck says. “You need to decide to be ready whenever they ask for it.”

Angela Lee, the director of love is respect

More like this
Wanna Try Hinge's New Video Prompt Feature? Here Are 7 Tips
By Lexi Inks
6 Dating App Tips To Try If You're Looking For A Serious Relationship
By Lexi Inks
Are Quality Time & Gift-Receiving Love Languages Compatible?
By Lexi Inks
Why Acts Of Service & Gift Love Languages Are A Dream Pairing
By Lexi Inks
Get Even More From Bustle — Sign Up For The Newsletter