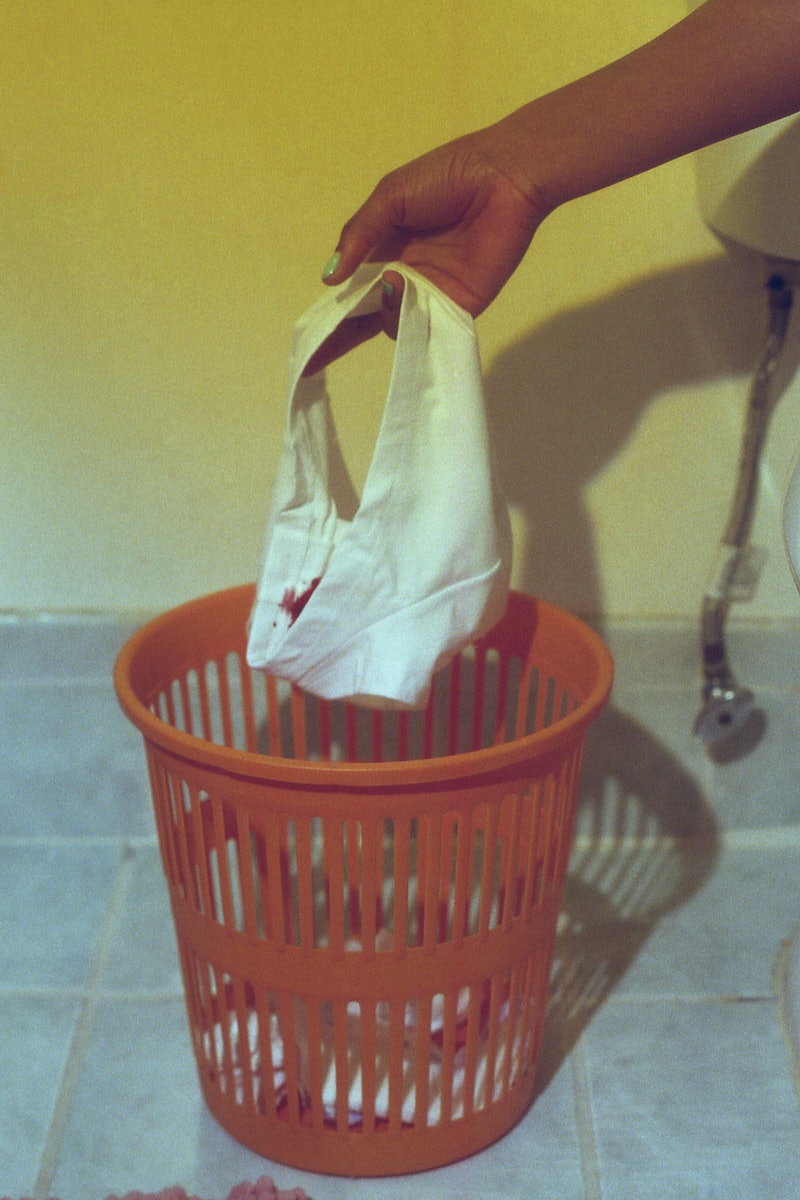 Like all the great philosophical debates, the question of how often you should change your tampon seems to have an answer too broad to feel totally satisfying. Medical sites and tampon packages alike suggest that you change your tampon every four to eight hours, a rule that most of us have been living by our entire menstruating lives. But that window seems so large — shouldn't there be a more exact answer? A formula we could apply to make sure that we never again had to deal with some unexpectedly stained underpants, or the exquisite micro-agony of dragging a mostly dry tampon out of your vagina?

Of course, there are other concerns besides the state of your drawers when it comes to figuring out how long to leave a tampon in. Though a few humorous essays about getting a tampon "lost" in one's vagina have gone viral in the past few years, using a tampon beyond the recommended amount of time is not a laughing matter — it can have real health consequences.

Why Changing Your Tampon Enough Is Important

Over the past few years, there have been several recent high-profile cases of young women who contracted toxic shock syndrome (TSS) — a complication of a bacterial infection, first identified in 1978, that can lead to shock and organ damage, and in very rare cases, death. Though people who don’t menstruate can also contract TSS, the infection became synonymous with tampon use in the early 1980s, after a number of women became infected with TSS after using the now-discontinued Rely brand tampons, which were designed to be extremely absorbent. Over 400 people filed cases against Rely's parent company, complaining of toxic shock syndrome brought on by using the tampon, which was quickly pulled from the market.

And though there has never again been an epidemic of TSS as there was with Rely, toxic shock syndrome still exists. A young woman in Greenville, Michigan, came down with a nearly fatal case of TSS in 2016. A mother in Wales was comatose for a week and lost her memory after a having TSS in 2011, and model Lauren Wasser lost a leg to the infection in 2012. All of these women have attributed their illnesses to tampon usage. That doesn't mean that developing TSS from a tampon is common by any means — a 2017 study published in The Lancet Infectious Diseases estimated that there are about 0.03 to 0.5 cases of menstrual toxic shock syndrome per 100,000 women — however, it does mean that being aware of how long you're using each tampon is important.

Fortunately, no one can simply "catch" TSS from just a tampon. People need to have a specific strain of staph bacteria known as staphylococcus aureus already in the vagina. When TSS happens, the bacteria multiplies in the tampon’s materials and becomes a toxic substance. (By some estimates, roughly 20% of the population carries the bacteria.) It’s also been known to happen extremely rarely in people who use menstrual cups, per a study published in European Journal of Case Reports in Internal Medicine in 2020.

How Often Do You Have To Change Your Tampon?

So, with all that in mind, what's the correct amount of time to wait before replacing your tampon? Is there some magic number that those tampon boxes have been keeping to themselves? According to Dr. Jennifer Caudle, M.D., a family physician and Assistant Professor at Rowan University, there is not. Though she notes that "everybody's body is different" — which would be why there's a window of time given, rather than of a single set amount of time when everyone should always switch out their tampon — Dr. Caudle tells Bustle that changing your tampon every "four to eight hours is reasonable," going on to note that some doctors might recommend a window of four to six hours. She also noted that, if you're worried about toxic shock syndrome (which she emphasized is "very, very rare") you can try to use tampons with the lowest absorbency possible. "We see more risk with the larger sizes," Dr. Caudle notes.

Those instructions on the back of the tampon box were right after all. If you are concerned about going to sleep with a tampon, or are nervous that you may sleep for more than eight hours, sleeping in a pad or period underwear might be the right call.

Do You Have To Change Your Tampon After Using The Bathroom?

Not changing your tampon after you pee won't put you at greater risk for TSS, or anything else — there have been no documented cases of infection from urinating while using a tampon. However, you should probably change your tampon after pooping. Though there is some debate about whether changing tampons every time you poop is necessary, the odds are substantial that the tampon string might come into contact with fecal bacteria, say, if you readjust your tampon immediately post-BM. That could potentially lead to a non-TSS-related, but still very serious, infection, for the same reason that doctors beg people to wipe front to back.

If you ever display the symptoms of toxic shock syndrome — which include developing a sudden high fever, sunburn-like rashes on the palms and soles, headaches, muscle aches, and disorientation — see a doctor immediately. But if your health is fine, don't freak out over the fact that you left your tampon in for six or seven hours — freak out about something else that involves your vagina, like, say, the tampon tax.