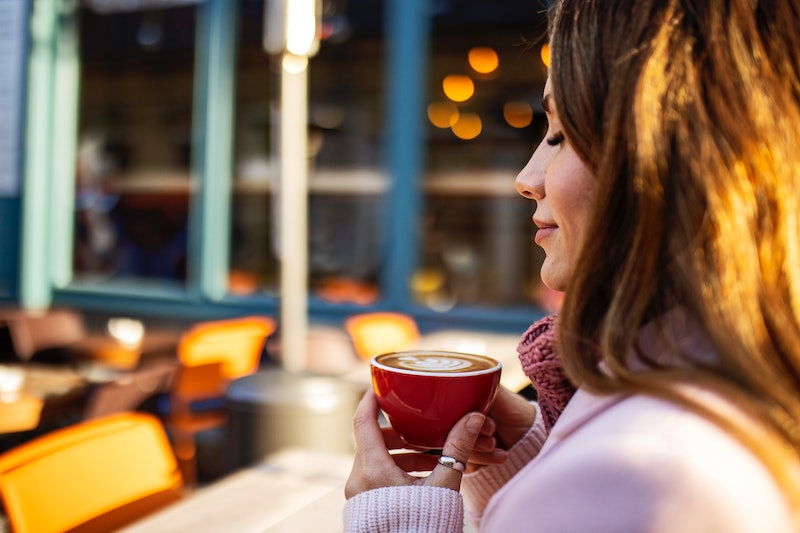 There's a bit of a stigma when it comes to doing things alone — you might be nervous people will think you’re friendless if you go out to a bar by yourself, or that you’re some kind of crazy cat lady if you take a solo trip across state lines. Of course, stepping out without your squad doesn't mean the squad doesn't exist to begin with — it just means you're comfortable enough with your own thoughts and company to be happy alone. But sometimes, that's easier said than done.

While some people are completely content with the company of a book or the activity of people watching, the rest of us could be thrown into a panic attack over the prospect of spending an evening alone in public. Or maybe you’re happy to sit in a movie theater solo, but the thought of doing something more active by yourself — like taking a surf lesson — is bound to make you feel itchy.

If you’re already getting sweaty thinking about doing these kinds of things as a party of one, these tips are for you. Here are nine easy tips for how to be comfortable alone that’ll help you appreciate those liberating days without company.

1. Remember That No One Really Cares You're Alone

One of the main reasons people feel weird about doing things alone is because they think everyone within a five mile radius is judging them. False. Even if someone notices you, they're probably not thinking about your lack of a partner. Sure, the stigma about being alone exists, maybe, but nine times out of 10, people probably aren't giving you much thought.

2. Remember That You Can Always Leave

Just because you've committed to going solo doesn't mean you have to stick it out the whole way through. Say you're going to a party alone, and you’re nervous you’ll start feeling awkward an hour in. No one says you have to sit through the small talk or continue to hover outside of conversation circles — just grab your coat and leave when it feels like it's too much. The same goes with any other situation: Did you begin to feel bored while perusing a museum yourself, or start to feel a little funny at a friend of a friend's happy hour? Just dip! No one's stopping you.

3. Forgive Yourself For Feeling Weird About It

Despite our best efforts, it can be tough to accept being alone sometimes. Lane Moore, author of How To Be Alone: If You Want To And Even If You Don’t tells Bustle, “It's completely okay to wish you weren't alone or to feel awkward because you're doing something alone. Some of us do things alone because we want to, and some of us do things alone because we have to. Both are completely valid, as are your feelings about it even, if they're not always positive.”

If you find yourself feeling awkward or uncomfortable being out and about solo, allow yourself to feel those feelings. It’s human nature to want connection and company sometimes, so what you’re feeling is valid. Learning to work through them on your own can not only help you get better at coping with feelings of loneliness, but it can also be a way to empower yourself. Deciding to step out and do the things you want to do, even when you’d rather not do them alone, is pretty badass.

4. Allow Yourself A Cheat

What's the first thing we reach for when we're uncomfortable? Our phones. What's a great distraction tool from nervously glancing around the room? A book. How can you keep your mind occupied and off the fact you have no one to talk to? A crossword puzzle. There's no shame in distracting yourself in the beginning until you get comfortable with the idea of just sitting there and blatantly people watching or hanging out with your own thoughts.

5. Pick Something To Focus On

Say you're going to lunch alone. Sure, you can distract yourself with a book or text your friend all through the chicken sandwich — or you can take it as a chance for some introspection. If you head outside with a game plan of what to think about, you'll feel more confident (and productive) sitting in one place alone.

Maybe you want to go on a trip this year, whether big or small. Maybe you want to think of a career move, or set yourself some personal character goals. Find a topic to dissect in your head and then give yourself that hour or two alone to go through it, step by step. In the end you won't notice you just had a three-course meal alone, and you'll feel like you go something accomplished.

6. Realize The Advantages Of Going Solo

We're so used to being in crowds and surrounding ourselves with friends that we don't really question what the downside of having company could be. But if you want to teach yourself to do things on your own, listing the benefits of going solo during these activities could be motivation enough to go through with it. For example, one benefit is that you can do exactly what you want to do. You don't have to consult with anyone or check in on anyone's feelings but your own: You want to eat that whole giant brownie instead of dinner? Go for it. You want to spend five hours shopping one sales section? The afternoon is yours.

7. Do Things You're Really Excited About

Say you got to the bottom of this list and you're still unconvinced. You just can't imagine sitting somewhere alone, your nose awkwardly buried in your phone as you try to pretend you're not inside-out uncomfortable. To motivate yourself to leave the house alone, do something you're super excited about. Maybe there's a movie out you've been waiting years for, a new museum exhibit by your favorite artist, or a local landmark you’ve been meaning to visit. If you're jazzed enough about it, you won't have enough room to feel weird about the fact you're doing it sans pals.

8. Occupy Yourself With An Activity

If you preoccupy yourself with an activity you won't have time to notice your uncomfortableness. Go to a concert or a story reading; buy tickets to a play or go mini golfing. Try taking a cycling class or pick up art classes. Whatever it is, if it's an activity that preoccupies your mind, you won't have the time to realize you don't have company. You'll be having fun, and all on your own.

9. Remember That Being Alone Is Really Cool

“There's definitely an increased stigma for women who are seen doing things alone, but the fact is women look just as cool, if not cooler, doing things alone than men do,” says Moore. “People know that doing things by yourself is brave, so anyone who sees you knows you must be extremely cool.” If you’re feeling self-conscious about doing things alone, remember that it takes a lot of independence and confidence to do so. If anything it’s probably admirable to others who see you living life on your own terms, in your own company.

Your relationship with yourself is the most important (and longest) one you’ll have, so don’t lose sight of the fact that by mindfully cultivating happiness being alone, you’re doing something really positive for yourself.

Lane Moore, author of How To Be Alone: If You Want To And Even If You Don’t

This article was originally published on Sep. 22, 2015