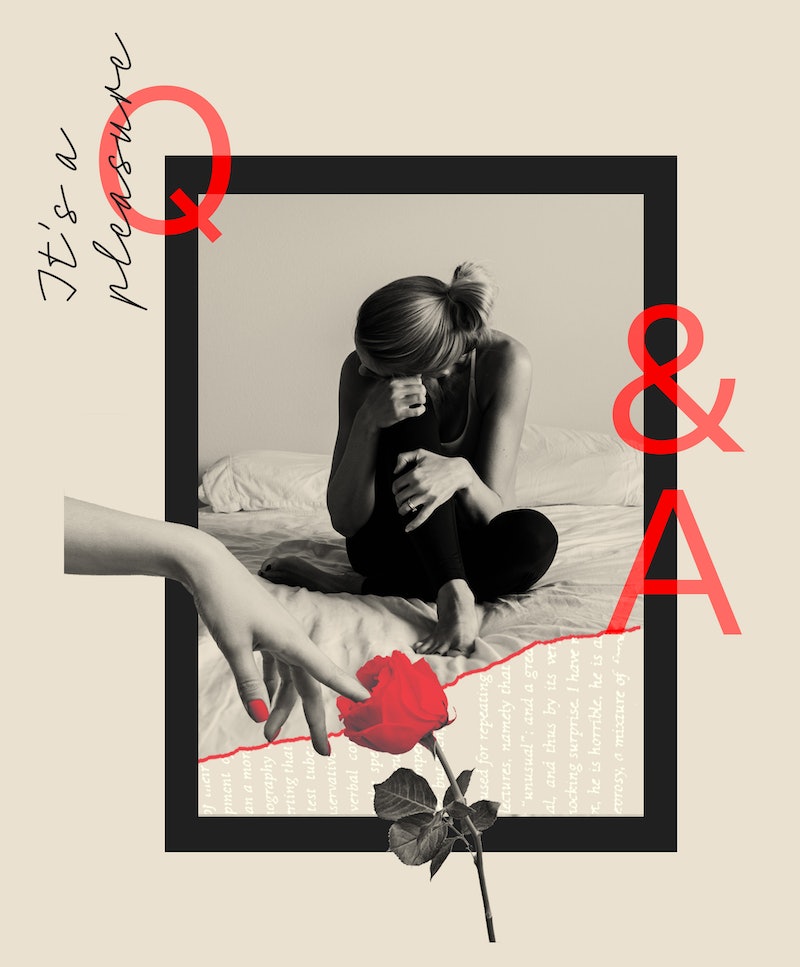 Kelly Knox/Stocksy
By Sophia Benoit
July 28, 2022
It's A Pleasure

Q: I am desperately missing a narcissistic ex who was emotionally abusive to me. I can't seem to move on and I haven't slept with another person since our split. It's been almost two years and I just really want to move on. I think about him every day and even when I try not to I can't help it. I've blocked all his social media but I know that he has moved on with multiple partners since, while I am just stuck. Logically, I know that he was not worthy of me. He did not respect me and treated me very badly. So why am I still hooked on him? I really want to move on. It's my birthday next month and I would like to enter into a new year of existence without this painful baggage. Any advice you can give would be helpful!

A: One of the sickest paradoxes of love is that it’s usually the hardest to get over the sh*ttiest people. And in a lot of ways, this is by design — both the design of their actions and the design of our brains. For starters, abusive people are adroit at keeping people in their orbit via intermittent reinforcement. If you’re not a big B.F. Skinner fan, basically the idea is that you provide rewards and punishments at varying intervals, which keeps someone guessing. It’s not that you press the lever and get a treat, it’s that you press the lever and every so often a treat comes out and you never know when it’s going to happen so you keep pressing the lever over and over because who knows? (Most gambling works the same way.) The reason you’re having a hard time getting over an abusive jack*ss is because he was an abusive jack*ss.

Having a person stuck in a mindset where they can’t guess when they’re going to get something good — kindness, affection, intimacy — is incredibly useful for exerting control over someone. It makes a person anxious and desperate to be good constantly, to behave and perform. Again, all of this is very intentional behavior from an abuser, even if they aren’t sitting down thinking about Skinner and operant conditioning. Your abusive ex decided that his moods, his desires, and his schedule mattered, and yours was to mold to that. He was regulating the emotions for both of you for the time you were together — if he was upset, you needed to feel upset; if he was happy, you needed to feel happy; if he was turned on, you needed to be turned on. Your brain got told (by him) that it needed to fixate on making sure he was not unhappy to avoid as much pain as possible because the narrative abusers use is “you caused my pain, you ruined my good mood, you are to blame for how I treat you.” Your brain obsessed over him to keep you safe because your brain believed on some level (because he told you this) that if you were good enough, he’d love you well. That is a very, very sick thing to convince another person. And it’s, I think, a large part of the reason you’re having a hard time moving on. Your brain was trained to be a Pleasing This Guy Machine, and it’s very difficult to unlearn that.

But! It’s not impossible — people do it all the time. There are currently thousands of people like you who are retraining their brains to not be built around their abusers. You’ve already done so much of the work, too! You are no longer in the relationship — congratulations! On top of being done with the relationship, you’ve given yourself the gift of time. Time does a lot of the work for you. You may feel like you’re stuck back where you were when you broke up, but I promise you aren’t.

I think part of what’s going on for you is that there's a narrative that you picked up somewhere that you’re repeating to yourself which is something like, “I’m stuck on him and I can’t get over him and he’s over me.” And the more you think about him, the more frustrated you get and then you get frustrated that you’re frustrated. I strongly encourage you to allow yourself some more grace. When your brain thinks of him — which it will! It trained for the Thinking Of Him Olympics for years — you can gently say to yourself, “OK, thanks for that thought, brain. Not super helpful, but I get why.” You can also borrow my mantra for intrusive or unwanted thoughts, which is, “That’s not my business.” So if your brain says, “We should worry about if we’re ever going to move on from him,” you can say, “It’s not my business if I ever move on from him.” You can also set a timer to worry about it later. You can write down in your planner a certain time each week to worry about him and obsess over getting over him. If you think about him outside of that time, no big deal, just remind yourself that you’ll be going over that at your Wednesday 11 a.m. meeting with your brain.

Now, that’s actually only the first part of moving on; in my opinion, there are three levels of moving on from a relationship. (This is not scientific at all, of course!) People are usually in a rush to do all three or to do step three first in order to make step one happen. You in your letter actually do it! The steps are — oversimplified — like this: him, you, someone else. The first person you have to move on from is the ex. You have to do big concrete things like move out of their apartment and block them on social media and stop hooking up every time you’re back in your hometown. You have to start living your life without them. You have to work to not associate every experience with their perception. It’s hard! (As you know!) Eventually, you get to the place where you can admit they had a weak chin and very bad taste in cocktails and they loved really boring movies about submarines and ultimately it’s OK that it’s over, even.

The next — and most important — step of moving on is the part where you painstakingly rebuild your own life. You find out what you like (movies about sharks). You try new things. You go back to the friendships you ignored and bow and scrape a tiny amount and beg for forgiveness that you don’t need at all. It’s not about romance at all. It’s about figuring out who the hell you are without this other person’s influence. This is crucial. You must do this step otherwise you will lose yourself. You have to do this for your own sake, but also so that you don’t arrive in your next relationship as the person you were with the last love. This step takes longer than people would like it to. Some days it’s lonely and rotten and some days it’s expansive and freeing. But it’s the only way you have the capacity for the next step: a new healthy relationship. Having sex with new people is totally fine and can come at any time! I love casual sex! But please, for the love of all things holy, stop using it as a measuring stick for where you are in Getting Over Him. It doesn’t mean any more than it would if you hadn’t played backgammon yet since your breakup and he was playing it every night. Please, focus on yourself!

All of that said, [Kris Jenner voice] I think this is a case for the FBI, and by “the FBI” I mean “a therapist.” I don’t want to make you feel more fixated on the amount of time you’ve been affected by this breakup, but I do think two years of thinking about a person every day is a lot. It’s a lot of time you’ve given to someone — and time that you no longer want to spend on them. I have to give my girl, the passing of time, her due: she’s a fantastic healer. But time can’t always fix everything. Time alone isn't going to fix a broken leg (well, not correctly). And time alone may not be the answer here. I think it especially matters to have someone with whom you can unpack the abuse you endured, because without actually addressing what happened and why, it’s like trying to run a marathon on the leg that you broke two years ago and never reset or put in a cast. I think there’s some grueling emotional work that’s going to be necessary to fully move forward in your life.

More like this
How Do I Deal With Both ED & Premature Ejaculation?
By Sophia Benoit
I Never Orgasm During Sex. What Can I Do?
By Sophia Benoit
Is It A Rebound Relationship Or The Real Thing?
By Carolyn Steber and Lexi Inks
Are Quality Time & Physical Touch Love Languages Compatible?
By Lexi Inks
Get Even More From Bustle — Sign Up For The Newsletter