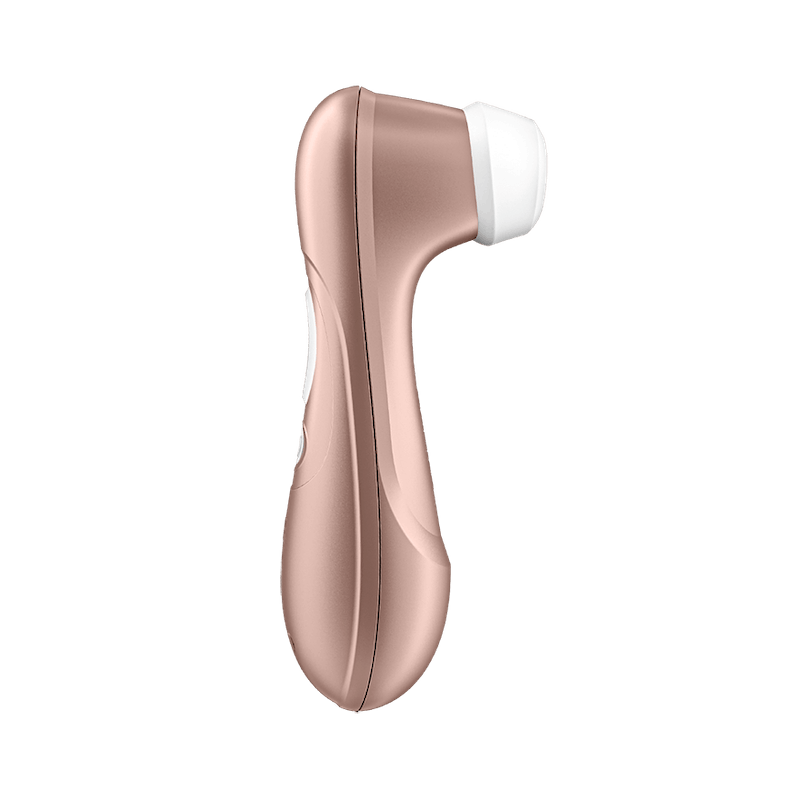 We’re living in a golden age of sex toy innovation. Brands have perfected toys that mimic oral sex, toys that heat up, and even remote-controlled toys connect you with a partner hundreds of miles away. But a classic like the Satisfyer Pro 2, first introduced in 2016, is always worthy of a closer look.

Although it looks a lot like the much-hyped oral sex simulator The Womanizer, The Satisfyer Pro 2 Next Generation has some key features of its own. With 11 programs and "innovative pressure wave stimulation" the manufacturer promises "contact-free enjoyment” which can be experienced pretty much anywhere. Plus, the magnetic charging connection makes it quick and easy to re-up your battery. Newer versions of Satisfyer products come with an app that allows you to create your own custom vibration patterns, or even turn ambient sounds into vibrations using your phone’s microphone. They’ve also dropped a collection of pocket-sized vibrators, including the Purple Pleasure, which boasts pinpoint accuracy.

But when it comes to the original, one Amazon reviewer was immediately impressed with the award winning design: “It’s a beautiful sleek device, no ugly words or pictures to throw your concentration off. Smooth to the touch with curves in all the right places to be able to cradle it in the palm of your hand and keep it in place.” Another described their experience with the Satisfyer Pro as a “game changer.” They continued, “Imagine 100 perfectly formed angels going down on you, whilst soothing your soul and whispering in your ear the answer to all your problems.”

While your mileage may vary (no angels guaranteed), this product has scored thousands of likewise glowing reviews. But how is a toy going to get me off without even touching me? I had to know more, so I grabbed one and charged it up to check out for myself. Here's what I thought.

How The Satisfyer Pro 2 Works

The toy itself is a long, thin device that looks kind of like that thing your doctor uses to look in your ears — that is, if you had a super fancy doctor whose devices were all rose gold-colored plastic. On the end that you put on your clitoris (yes, it actually does touch your body), there’s a soft plastic cap with a hole in it. That hole goes around your clitoris, so that it’s engulfed but not touched. The cap rests on the skin around your clit.

Here’s where the wild tech stuff comes in. The Satisfyer Pro 2 says it uses “intensive pressure waves and tingling pulsation” to bring you to orgasm. No touch, just motion going around your clit, through the air. And while the technology is similar to The Womanizer, The Satisfyer Pro 2 can be used in the water, and at less than $50, is much cheaper.

Putting The Satisfyer Pro 2 On

The Satisfyer user’s guide boasts that this toy is hands-free — as in, once you get it situated, you don’t have to move it. I laid on my back and, as the user guide (and my previous experience with toys) dictated, put a small dollop of water-based lube on my clit. I turned the toy onto the first and lowest setting, and then put it on me so that the mouth part (I can’t decide which body part it most resembles, to be honest) was resting all around my clit, and the handle part was pointing down between my legs.

When I put it on, it was already vibrating (or pulsing is actually more accurate, or maybe whirling?) to create the suction so it would stay in place. Because it was already moving, it got my body feeling great pretty immediately.

I will say that the guide makes it seem like once it’s on you, it stays on. I found that the suction wasn’t as perfect as all that. I had to put my hand on it every once in a while to reseal it around my clit. And when I flipped it so that the handle was pointing up toward my face, I had a hard time getting any suction to maintain. It felt like gravity was working against me, but that might not be an issue for other users.

Playing With The Satisfyer Pro’s Settings

I was immediately impressed by the sensations from the no-touch vibrations of the Satisfyer. The first level was pretty calm and gentle, and each subsequent level went up at a graduated interval so I could really get a range of intensity. I found that it was even more enjoyable to push down on the toy’s head to get better suction and more intensity.

The pulsation itself was really lovely. I’d say it was kind of like getting wind blown at my clit from all sides simultaneously, without any cold temperatures. It actually felt like something was touching me, but not in an overly intense way that can happen with some vibrating toys when they touch your clitoris directly.

Using The Satisfyer Pro 2 In The Bath

The Satisfyer is waterproof and they urge you to try it out in the bath, saying this provides stronger pulsation. So I hopped into a warm tub to try it out.

The pulsations under the water were a bit stronger, and it was easier for the toy to suction onto my body. However, while the toy connected to my body more easily at first, it also floated a bit, so I had to keep a hand on the top of the toy to keep it in place. If being in a bath turns you on and that’s where you like to play, this is a great toy to bring in with you. But I don’t think it’s critical to use it in this setting to get its full effect.

Using The Satisfyer Pro 2 With A Partner

Since I was having so much fun with the Satisfyer Pro 2, I figured I’d invite my partner in on it. Unfortunately, this didn’t go so well. As I mentioned previously, I personally had trouble getting the suction to work when the handle was pointing up toward my face. This means that the whole handle sits between my legs when I use this toy, pretty much completely blocking my vaginal passage. My partner and I tried a few different configurations, but couldn’t find one that included both vaginal penetration and this toy being able to stay on my clit. It could, however, be great for anal sex. And it’s totally possible that if you try, you’ll find positions that work for you.

I usually like something inside me when I’m playing, so I was a bit skeptical of a toy that didn’t have an internal vaginal part. However, I was extremely and delightedly surprised by the Satisfyer Pro 2. It gave me multiple fully clitoral orgasms, which never happens for me otherwise. The technology clearly works, at least for me! If you want a suction-style toy with a cheaper price-point than The Womanizer, or a suction-style toy you can use in the bath, I highly recommend it.

More like this
How To Do The Intimacy-Boosting Lotus Sex Position
By Laken Howard and Lexi Inks
Expert Tips For Being On Top When You're Plus-Size
By Lexi Inks
The Best Time To Date After A Breakup, According To Experts
By Bustle Editors
Are Quality Time & Physical Touch Love Languages Compatible?
By Lexi Inks
Get Even More From Bustle — Sign Up For The Newsletter

This article was originally published on November 23, 2016