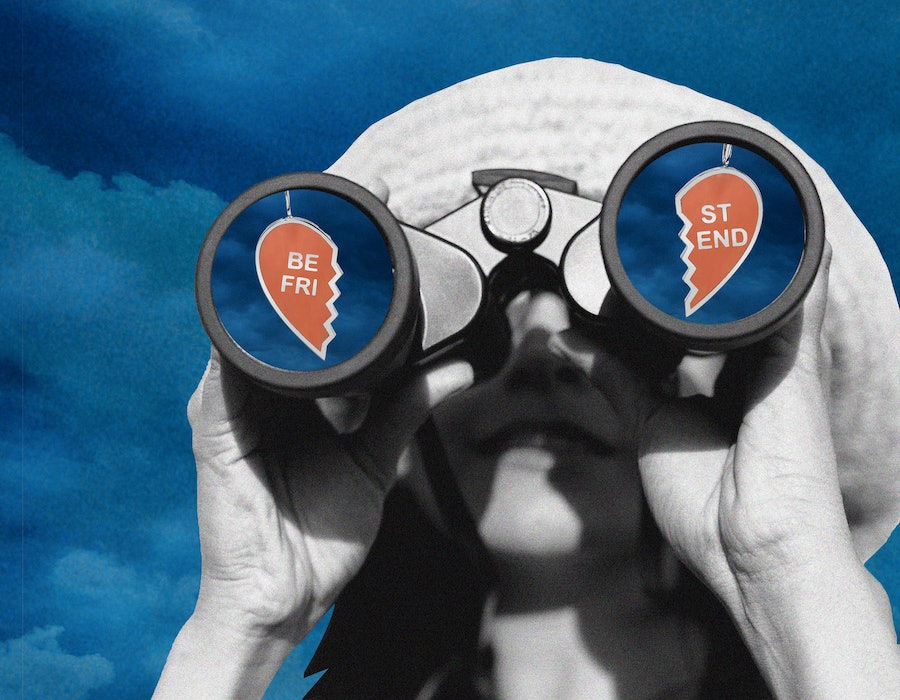 It’s 7 p.m. and you’re sitting down to casually scroll social media while you eat dinner, just like you always do. But then you see it: A new IG post from Selena Gomez featuring Nicola Peltz and their brand-new matching tattoos. Now it’s 9 p.m. and you’re two years deep into Gomez’s feed, searching for clues. Has she always known Peltz? Did they just meet and become besties overnight? Does this mean she broke up with Francia Raisa (who, BTW, once gave her a kidney)? By midnight, you’ve constructed full-on flowcharts and timelines worthy of an FBI investigation.

For anyone who’s ever fallen down a social media rabbit hole while examining celebrity friendship breakups, you know firsthand how thrilling — and even kind of addicting — the search for clues can be. In Gomez’s case, you might have noticed that Raisa posted a single word — “interesting” — under a post where the singer talked about only having one friend in the industry, then quickly deleted it. (Raisa’s an actor, but it turns out Gomez was referring to Taylor Swift. One of many clues in their alleged breakup?)

While it’s juiciest to investigate the lives of influencers and celebs, it’s also tempting to put on your detective hat for friends and acquaintances, too. When someone has a brand new and super-intense friendship that burns like wildfire before fizzling out, it’s only natural to wonder what TF happened.

Before social media, of course, it wasn’t this easy to dive into someone’s personal life. For friends, you’d have to wait to hear gossip through the grapevine. For celebrities, you’d get a small dose of info from gossip columns and magazines, where tidbits were carefully distributed through the lens of the media. Think of all the Lindsay Lohan and Paris Hilton drama that was splashed across tabloids in 2006. We knew what was going on, but beyond paparazzi photos, tabloid stories, and blog posts, there wasn’t much to bite into.

It wasn’t until the mid-2000s and 2010s when platforms like Facebook, Twitter, and Instagram took off that celebs started to truly open the curtains to their lives by sharing their own snapshots online. “That gave us more access to others than ever before, and it started a whole different cultural experience of being let in more intimately,” says Scott Lyons, Ph.D., a clinical psychologist and author of Addicted to Drama. When a celeb shares a personal pic of their breakfast or vacation, it suddenly seems like you’re a part of their lives, he tells Bustle.

Once you get a tiny taste of someone’s life, there’s often a pull to learn more, especially when drama is involved.

An article about a famous person might be fun to read, but it doesn’t come close to revealing as much as their own social media. “It doesn’t spark that sense of being as welcome, and that makes a huge difference psychologically,” Lyons says. When Hailey Bieber posts a holiday photo dump or her recipe for pizza toast, it almost feels like you’re FaceTiming with a friend. A social media feed sends the message that you’re not only let into someone’s life but that it’s totally OK to be there.

Once you get a tiny taste of someone’s life, there’s often a pull to learn more, especially when drama is involved. “We as humans have a desire to close the circle, so to speak,” Lyons says. “We have to complete the unfinished business of our mind, so when we’re given these little breadcrumbs of information [about a friendship breakup], we desire to make the bread, and that includes spending time going down the rabbit hole of information to put all the breadcrumbs together.”

After the “only friend in the industry” controversy, Gomez addressed her relationship with Raisa on TikTok. She responded to a video about their friendship with a comment that said “Sorry I didn’t mention every person I know.” This is the kind of intel you uncover after hours of swiping through IG and TikTok to piece together clues.

Whether you follow an actor, athlete, or influencer, cobbling together bits of info to answer your own questions can be comforting, in a way. “It becomes a social glue,” says Lyons. “It’s filling some type of gap, and we all have a gap.” You know this person isn’t your friend IRL, but you still feel connected enough to invest your time, and that’s when you get into the realm of parasocial relationships, aka a one-sided relationship with a celeb where the lines start to blur even more.

By midnight, you’ve constructed full-on flowcharts and timelines worthy of an FBI investigation.

According to Dan Rosenfeld, a social psychologist and founder and director of The Match Lab, the desire to investigate friendship breakups also has ties to evolution. The human brain evolved to take an interest in the lives of others, especially folks who were considered high status, he explains. And we passed that info to each other through gossip.

“By learning about high-status people and understanding their social ties, our ancestors may have been better able to behave in socially rewarded ways and maintain a positive reputation,” he tells Bustle. Knowing what the cool kids were up to helped us form relationships, gain resources, — and ultimately survive.

While the stakes aren’t as high today, we’re still hardwired to try to understand how others tick so we can apply that knowledge to our own lives, Rosenfeld says. When you dig deep enough and see that Raisa actually unfollowed Gomez on Instagram, it’s tough not to take it to heart. After all, if two besties like Gomez and Raisa can falter, then maybe your own connections can, too.

More like this
I Spent 2 Years Trying TikTok’s Dating Advice
By Kailynn Johnson
Ashamed Of Your Screen Time Stats? Here's How To Change That
By Alexis Morillo
Learning To Love, Not Judge, The Lunchbox Wives Of TikTok
By Esther Zuckerman
10 Texts That'll Help You Reconnect With An Ex-Best Friend
By Lexi Inks
Get Even More From Bustle — Sign Up For The Newsletter
From hair trends to relationship advice, our daily newsletter has everything you need to sound like a person who’s on TikTok, even if you aren’t.