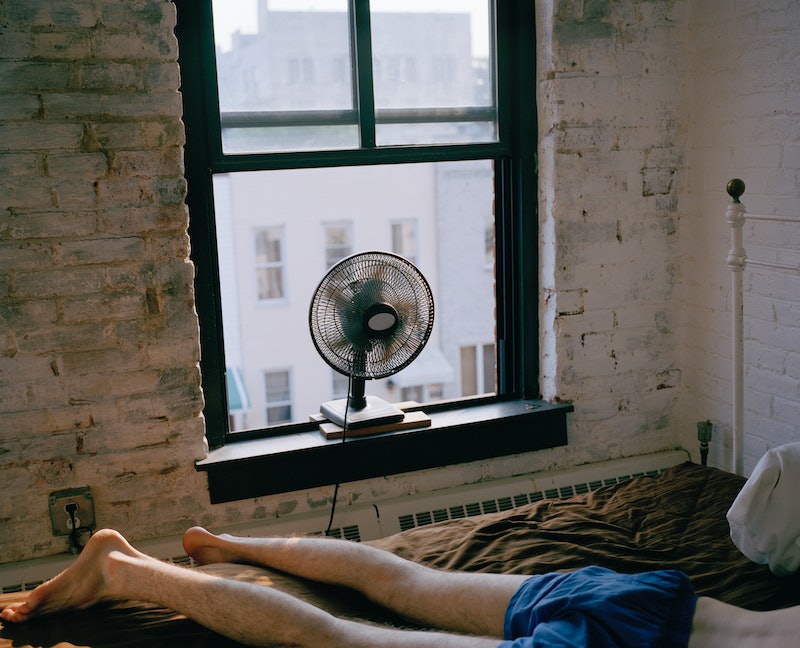 Getting a good night's sleep is no picnic in the middle of a heatwave. Is it just me or does the hot, clammy weather turn the whole thing into an Olympic sport rather than a cosy reprieve? Not cool (pun intended). A lot of people tend to stick on a fan to give their bodies some semblance of cool air when the weather gets like this — but what about at night? Is it safe to sleep with an electric fan on?

The answer is yes, but with a few conditions. Sleeping with a fan on can be dangerous if you don't check that your fan is working properly, that it has been safety tested by the manufacturer, and that you have it set up in the correct environment.

What risks are associated with sleeping with an electric fan on?

The biggest risk of sleeping with an electric fan on is that it could be a potential fire hazard. There’s a small possibility with any electrical appliance that it can get too hot and catch fire, which is especially dangerous when you’re asleep as not only will you have a delayed reaction time, but you’re more susceptible to smoke inhalation whilst already unconscious.

How can you minimise this risk?

When using an electric fan, you should regularly check that it’s safe to use. Start by looking for its CE mark on the product or its packaging, which confirms that it’s “been safety tested against rigorous international standards and is safe to use in the home,” says Steve McEvoy, a chartered engineer at Prism Nova (and, full disclosure, also my father).

However, as McEvoy points out that “unfortunately there are a lot of fake goods on the market,” which means “CE marks can be just as fake as the goods themselves.” In other words, make sure you do your research to check the legitimacy of the product.

And, even if your fan is legit, you “always be cautious when using anything electrical” McEvoy adds ,as products “can contain manufacturing defects that can result in safety issues.”

To make sure that your fan — and other electrical appliances — around your home are safe, McEvoy suggests "regularly check the that the plug and cable is in good condition, in particular make sure the cable isn't frayed, split or excessively twisted." And when it comes to fans, immediately stop using them if it begins to "make unusual noises or if you can smell or see the effects of heat, smoke, scorching or burning anywhere on it."

Can sleeping with a fan affect your health, too?

Yes, sleeping with a fan on can have some adverse effects on your health, too. According to Public Health England, "fans can cause excess dehydration so they should not be aimed directly on the body." This is mainly when temperatures reach above 35 degrees celsius, as the air being blown onto your skin isn't evaporating your sweat (which cools you down) and is therefore making you sweat even more leading to excessive fluid loss. Dehydration caused by fans can be especially detrimental when sleeping, as you practically fast for eight hours; but it's not likely that temperatures in the UK will go above 25 degrees during the night.

A sudden loss of fluid from direct air can also effect your skin, especially if it's sensitive. Not only can fans cause dry skin and minor irritation due to lack of moisture, but it can also effect your sinuses, eyes, and muscles according to Sleep Advisor. It's all to do with that "constant stream of air", especially if you're like me and prefer your fan to stay in one direction rather than circulate.

If you're one of the few that somehow sleeps with their eyes partially open, "a steady airstream will dry your eyes and may cause major irritation." That irritation can carry on into your sinuses and dry your nasal passages, making you "more susceptible to blockage, stuffiness and sinus headaches. Not the greatest way to wake up in the morning, is it?

Especially not if your entire body is tense. Thanks again to that stream of air, your muscles may react by tensing up and cramping thanks to the "concentrated cool air". Although, this is more likely to occur if you have the fan positioned directly near your face and neck, rather than at a distance.

Then there's those blessed allergies. As Dr. Seema Sarin M.D., director of lifestyle medicine at American medical provider EHE Health, explained recently to our colleagues in the U.S., sleeping with a fan on "may cause more harm than good if you suffer from allergies."

Dr Sarin explained: "First, a fan is going to blow air around the room and with that, it blows around dust particles. If you are allergic to dust mites, it can exacerbate your symptoms with increased exposure." Fans can also circulate pollen, she said, which may exacerbate hayfever symptoms.

She added: "A fan circulating air around the room can promote drier air, which can lead to drying out of your mucous membranes and sinus irritation."

How else can you keep cool at night except for a fan?

All in all, fans are really the safest or healthiest option when it comes to a cool night's sleep. So what other options are there?

One is keeping your bedroom cool as you can all day, another is filling a hot water bottle with ice water or lining your bed with a large cooling mat. The National Sleep Foundation also have some tips to keep cool during the night in their Heatwave Plan, which you can read here.

It's not that difficult to keep cool during these muggy nights, you've just got to be prepared.

This article was originally published on July 26, 2018