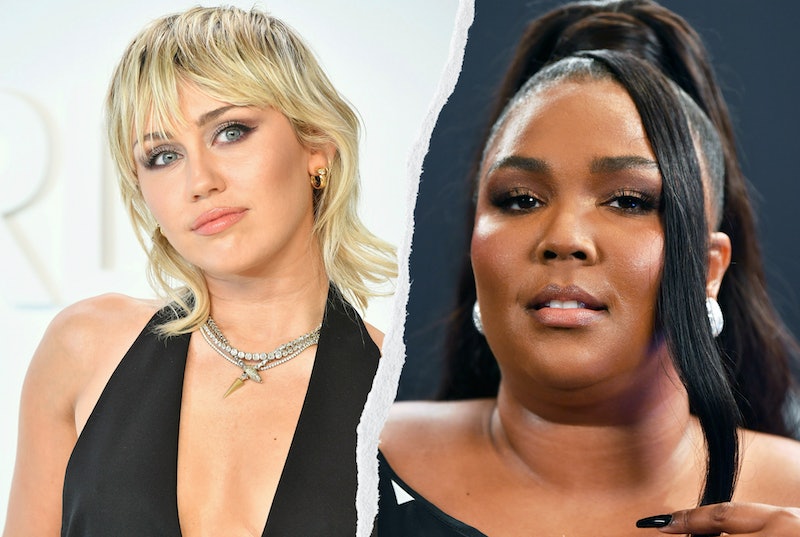 On Feb. 4, Miley Cyrus posted a video of herself running on a treadmill. But she wasn't just showing off her athletic skills — the star was belting out Bikini Kill's song "Rebel Girl" at the same time. Inspired by her feat, Lizzo did the same thing with her song "Cuz I Love You" and shared it on her Instagram. You know what this means: Thanks to Cyrus and Lizzo running and singing at the same time, the #mileychallenge is about to become a thing.

Cyrus' very extra exercise regimen is how she's prepping for her performance at the Super Bowl tailgate pre-show on Feb. 7. Clearly it requires stamina, because Cyrus can run — not jog — while singing at full gear. She's not just quietly uttering a few words of a chorus (like I do, which BTW isn't easy). A coach that's filming her tells Cyrus to try and "match the pace with the rhythm of the band." And she does it, while throwing some air drums in for good measure.

Anyone who's a fan of Lizzo knows the singer likes to take on a challenge. (Case in point: She slayed the jazz flute challenge Ron Burgundy gave her.) "So I saw Miley running and singing her song for stamina, so I'm gonna run and sing my song for stamina," Lizzo said in her Instagram video. "I'm doing this for all the big girls out there — they said we couldn't do it!" Obviously she nailed it.

Now that millions of fans between the both of them witnessed the running-while-singing stunt, the special workout is spreading. Digital fitness brand Peloton just officially dubbed it the #mileychallenge on its Instagram this morning, and called on its followers to tag themselves trying it. "@Lizzobeeating just raised the bar for our weekend workout plans — and proved that yes, *everyone* sings out loud on their Peloton," said the post in its caption. "Tag us in your #mileychallenge videos!"

If you're feeling inspired, consider belting out your favorite song a little more than you usually do when you hit the tread. Even if you're not performing at the Super Bowl, it'll make for a pretty damn cool Instagram post.

More like this
Breaking Down Miley Cyrus' Full "Flowers" Workout Routine
By Carolyn Steber
Are Those Under-Desk Treadmills Actually Worth It?
By Carolyn Steber
7 Challenging Yoga Poses That Turn Up The Heat
By Carolyn Steber
How Many Burpees Should You Do Per Day? Here’s What Fitness Trainers Say
By Carolyn Steber
Get Even More From Bustle — Sign Up For The Newsletter
From hair trends to relationship advice, our daily newsletter has everything you need to sound like a person who’s on TikTok, even if you aren’t.