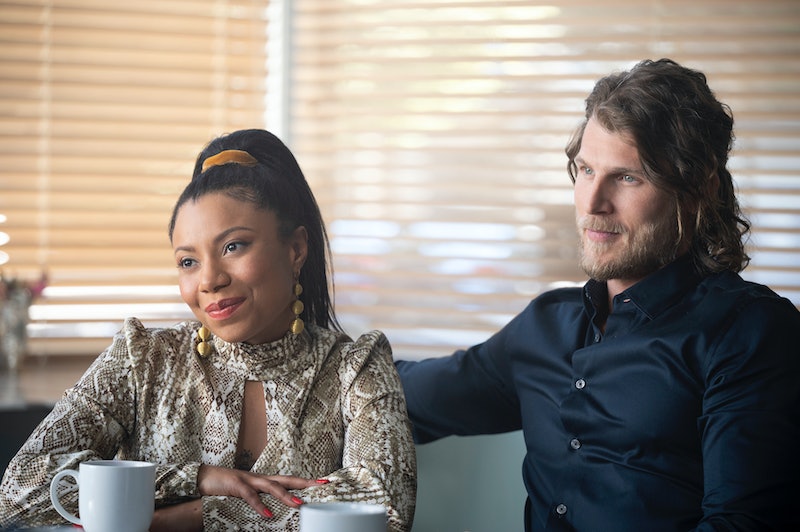 Spoilers ahead for YOU Season 3.

In an early scene of YOU’s third season, Love Quinn (Victoria Pedretti) wonders aloud, “Is your life even a brand without a perfectly imperfect soulmate?” Her rhetorical question is dripping in sarcasm as she scrolls through the carefully curated Instagram feed of Sherry Conrad (Shalita Grant), the vapid but well-connected momfluencer-in-chief in Quinn’s new home of Madre Linda. The fictitious Silicon Valley suburb represents a perfectly-calibrated community that lives by the wellness advice and shopping recommendations featured in weekly Goop newsletters, and Sherry and her husband Cary (Travis Van Winkle) are the perfect embodiment of the stereotype. Though the Conrads are written to be an amalgam of the most insufferable type of San Francisco couple — image-obsessed and dripping with obnoxious biohacked energy — by the end of the season, they surprisingly stand out as the show’s healthiest couple.

Not since the glorious Peach Salinger (Shay Mitchell) met her sticky demise in the first season has the murderous Joe Goldberg (Penn Badgley) faced a deliciously awful and captivating opponent, until he meets Sherry. “Warm but with an undertone of Peach-level condescension,” is his initial description of Madre Linda’s resident mean girl. Sherry runs a mommy blog turned content creation empire Heart-Shaped Mistakes that specializes in relatable parenting and relationship advice. Meanwhile, Cary operates an inner warrior-shaping enterprise, neither of which offer a hint of actual introspection. They are the quintessential his-and-hers self-improvement dream team — or nightmare — who make their living transforming flaws into solves.

A fountain of buzzwords falls freely from the Conrads’ mouths, which gives the impression they live one self-help book fad at a time. Sherry’s oversharing kicks off in the first episode when she asks Love about the condition of her post-natal vagina in order to show off her sexpert credentials. “But connecting intimately? So crucial,” she intones with the air of humblebragging and superiority.

Gleaning marriage advice from a couple whose very existence blurs the line between authentic and manufactured seems foolhardy, and while I’m not suggesting getting locked in a cage with your significant other in lieu of therapy, Sherry and Cary make some points while at the mercy of their serial killer besties.

Whereas the professional counselor barely scratched the surface of Love and Joe’s issues — it’s hard to blame her for not picking up on their actual killer tendencies — Sherry’s years of strategically revealing her relationship shortcomings as part of her business model make her an authority in the modern-day marriage field. “I get to choose my flaws. What gets criticized, when they even see,” is the momfluencer’s method for surviving suburbia. Sherry has used everything at her disposal to turn her life into a successful enterprise, from her role as a “twin mom” to the longevity of her romance with college sweetheart Cary, and she takes this approach to working her captors’ relationship cracks.

Joe and Love’s self-righteous attitudes can’t hide the lack of faith they have in each other, and while the Conrads obscure their insecurities beneath a veneer of optimized living, there’s never a doubt they’re on the same page. Even when they talk in soundbites that resemble copy from Heart-Shaped Mistakes — “Our marriage grew rock solid through these little trust falls” — there’s a tangible undercurrent of compatibility.

Joe only agrees to the night of swinging as a way to expedite the dissolution of his marriage without risking his new object of affection, which obviously backfires for all involved. Love thinks that by giving the Conrads a gun they’ll turn on each other — it is what she would do, after all. But ultimately, the high stakes only serve to emphasize how deeply they care for each other, albeit, that comes with a side order of relatable bickering. Cary’s remarks about loving “every version” of Sherry are sincere, and her fury that he accidentally shot her is equally raw (and hilarious in that campy, You-patented way).

Every marriage is put to the test, and You really leans into the “in sickness and in health” line in standard vows (until inevitably Joe decides it’s time for the pesky “death do us part” bit). Not many enter Joe and Love’s pastry dungeon and live to tell the tale, however, the years Sherry and Cary have spent crafting an image that utilizes their relationship flaws becomes the literal key to making it out alive. “Baby, they’re the weak spot,” Sherry exclaims, and a new phase in their brand is born.

More like this
Bumble's "Compliments" Feature Lets You Message Before You Match
By Lexi Inks
Do I Have To Tell My Crush That I Slept With Her Ex?
By Sophia Benoit
Are Capricorn & Aquarius Compatible In A Relationship? Astrologers Weigh In
By Kristine Fellizar
How To Have A Hometown Hookup Without Catching Feelings
By Lexi Inks
Get Even More From Bustle — Sign Up For The Newsletter