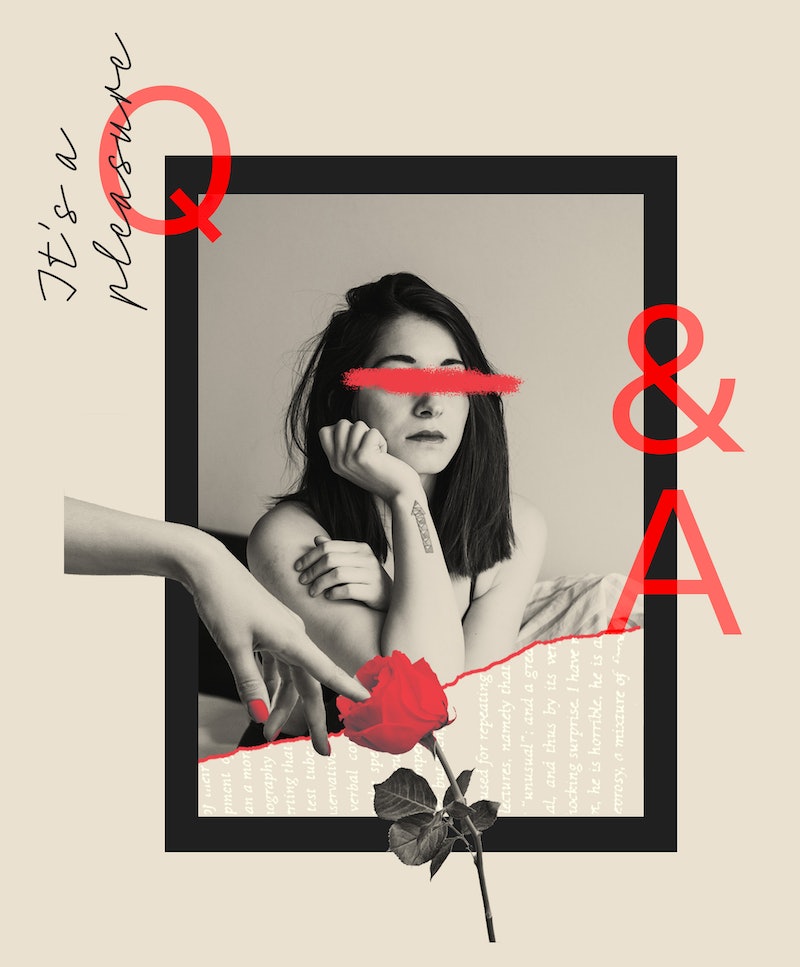 Vertikala/Stocksy
By Sophia Benoit
May 19, 2022
It's A Pleasure

Q: I’m 42 and have never had sex. For the first 30-ish years it was because of religion. For the last 10-ish, it was because I’ve been overweight and can’t imagine someone seeing it. I’ve lost some weight and am working on myself in therapy, but haven’t felt able to bring this particular issue up in front of anyone, even my therapist, in person. I’m mostly normal in every other area, I promise. Anyway, I’ve lost some weight and have toyed with the idea of dating again but I have no idea how I’d ever even begin to explain this to someone. Honestly, I’m terrified to have to admit to this. How on earth do I move forward if I want to maybe find love at some point? Am I too weird? Is it too late to even start?

A: You don’t need to promise me that you’re normal! Nothing about your letter seemed abnormal to me (not that abnormal is bad anyway!). Believe me, I get the impulse to defend yourself when it comes to sexual experience. I’ve talked to many, many people who consider themselves “later in life virgins.” I put that all in quotes because, of course, virginity is a thing we made up and because later in life than whom, you know? It’s all both very real and very fake — it’s as personally and emotionally impactful as it is socially constructed.

To me, what you’re saying sounds something like “I haven’t tried vanilla ice cream before! Is it too late to try vanilla ice cream?” God no! Of course it’s not too late! Obviously, this isn’t precisely the case because we as a society have loaded sex with a ton of meaning. We’ve weighed down every single action and decision around sex with judgment, which was really foolish of us because sex is (or at least can be) really fun.

Here’s the big secret: you have no idea how much sex anyone is having, when they had it, and how they feel about it. No one does. I have friends who’ve never had sex and feel bad about it. I have friends who have sex nearly every day and feel bad about it. I have friends who fall into both of those categories and who feel great about it. But I want to be very explicit here, because I think we get a lot of messaging to the opposite: there are tons of people who don’t have any sexual experience who are “older” than the average. I know because studies, sure, but I also know because when I put out an ask to interview people who had lost their virginity “later” or who still hadn’t experienced sex, I got the most responses I’ve ever gotten. I had over 100 people reach out to me in about 12 minutes. I had to delete the tweet I’d put up asking for people to interview and turn people away. And when I did interview them, many of them said they’d never told anyone and that everyone in their life just assumed they’d had sex. So please believe me that I know just how common your situation is.

I also understand, however, that not having a sexual experience with someone else at this point in life feels like it means something. Or at least it might to other people. There are a lot of bad jokes and terrible assumptions about what it means to have not had sex as a teenager in someone’s Honda Civic outside the mall (or whatever teens do). And even if you know in your mind logically that this doesn’t make you any less worthy as a human, it might not always feel that way. You’re allowed to feel all the emotions about this as they come and go — I encourage you to, in fact! Proud that you waited, sad that it hasn’t happened yet, anxious about what comes next, overwhelmed by the idea of starting now, content without sex in your life, angry at pressures from your past. And all the thousands of nuanced emotions that we don’t have good words for. I think it would honestly be helpful to finally open up to your therapist about this so that they can help you go through all those emotions, because feeling like you missed out on something or that you want something you can’t simply purchase or study for or train for is hard to go through alone.

And I do think that’s one of the hardest parts of sex and dating, regardless of what experience you have — it kind of relies on other people. Someone else has to magically want the same thing at the same time as you do. Imagine if you’d never had vanilla ice cream before and in order to try it for the first time you had to also find someone else (with whom you share mutual attraction) to want to order it at the exact same time as you. You can’t just make someone else be ready to date you and be available and be on the right apps or in the right bar once you’re ready for your first trip to Poundtown.

So let me warn you: what comes next will be frustrating. It’s annoying whether you’ve had sex before or not. I’m begging you to work hard now and as this process unfolds (with your therapist and friends and journal!) to remind yourself that none of this is a reflection of you. You are a worthy, full, lovely human and you have been your whole life. Sex doesn’t change that at all. We’ve been exposed to way too much messaging that suggests that someone wanting us sexually is the absolute zenith of worth, that being able to turn someone on is one of the greatest things we have to offer other people. It’s not. So my strongest advice is to work as hard as you can — and this task is like Barry’s-Bootcamp-level difficult — to divorce your worth from your sexuality. Sex is an activity like downhill skiing, OK? You can do it alone or with someone else. How often you ski doesn’t decide whether you’re a good person.

OK, so now how to approach it? Honestly… while I’m giving you weird metaphors, let’s just go for it: approach it as you would skiing for the first time. Do some research, be as safe as possible, and jump in assuming that you’re not going to nail it the first time you try. Assume that your body is not going to cooperate with you 100% and that there will be things you have seen or imagined that will not go as planned. Good sex usually involves a whole lot more laughter and weird body sounds and functions than you’ve seen in movies or on TV. Take it one step at a time and say yes to things that sound good and no to things that don’t. You’ll probably at times feel embarrassed, vulnerable, horny, giggly, bored, sexy, and exposed. That’s all very normal and you’ll survive it.

Please try to be kind to your body, and if you can’t, be indifferent. From what you wrote, I’m going to hazard a guess that you haven’t always been loving towards your body, which is why I say this. Not having sex because of your own judgments about your body is a harsh punishment. Your body was great then and it’s great now and you deserve to date and have sex with people if you’d like to, regardless of what shape or size your body is. You are not your body. Your appearance is not a favor you’re doing for other people. It’s not a project that, once completed, means you get to go have fun. Like sex, it is not a measure of your worth. I know because I am and have been overweight (although BMI is bullsh*t so whatever) that not believing bad things about your body is much harder than believing them. I’m not asking you to love your body on command. I’m very pro body neutrality. I try to do my best to forget about my body as often as I can — sometimes my body is just not my business. Your body and specifically your weight is not a measure of if you’re ready to have sex or if you’re hot or if you’re turning anyone on. You are a fully-realized hot and sexual human being and you have been.

As for how to tell this to someone, explain it simply as if it’s normal because it very much is. You can start by saying while dating, “I don’t have much experience, so if I’m nervous about something or taking it slow, that’s why.” And then when it comes time to have sex, tell them it’s your first time. Keep in mind that you get to set the tone. If you want it to be no big deal, then insist it isn’t a big deal. If you want it to be really meaningful and romantic, OK, make that known. It might mean you wait longer until the ideal situation arises, but that’s fine! Don’t hint to your partner about what you’re looking for, be clear!

It’s not too late to start — it’s never too late! Be honest and vulnerable and grit your teeth through the awkwardness of what comes next because the other side of things can be really, really fun and intimate and you deserve that.

More like this
I'm 38 & Single. Why Can’t I Find A Serious Relationship?
By Sophia Benoit
35 Sexy Texts To Send Your Partner
By Griffin Wynne and Carolyn Steber
8 Flirty Games To Play Over Text With Your Crush
By Lexi Inks
What Are Swingers? Everything You Need To Know
By Lexi Inks
Get Even More From Bustle — Sign Up For The Newsletter