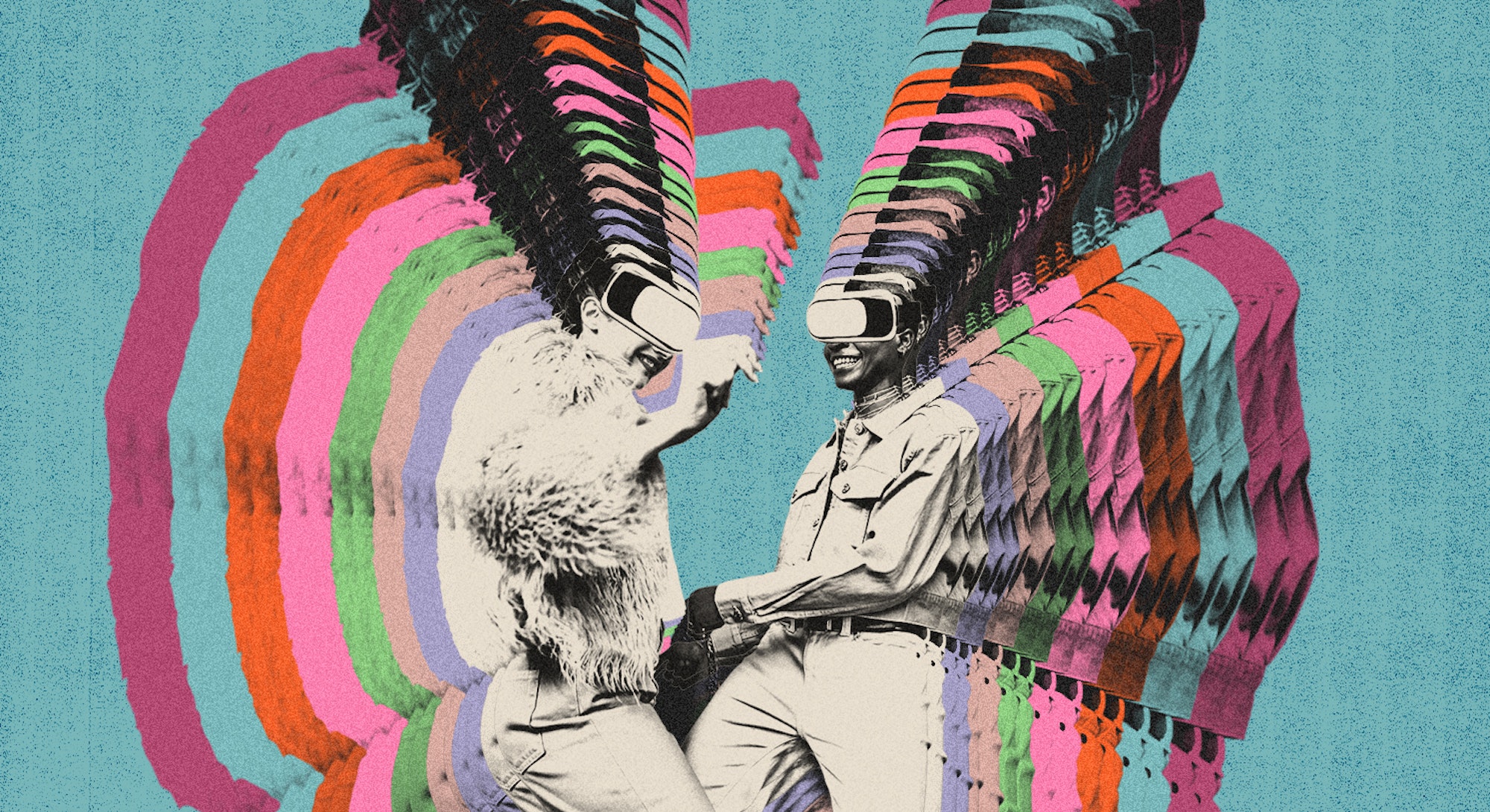 Picture the scene: Sometime in the near future, you’re quarantining at home, having caught the latest COVID variant. Luckily, the symptoms are mild, but you’re bored as heck, so you open up Tinder. Except this time, you’re wearing a VR headset and as soon as you swipe right, you’re transported to a virtual date in the form of an avatar who has your speaking voice. If you and your match hit it off at the virtual bar or bowling alley, maybe you’ll decide to meet up with their human flesh version in a few days. And if the vibes are off? You can exit with one click.

Tricked-out dating app features like video dates, voice prompts, and interactive games (like Swipe Night) trended during the pandemic, as we stayed home but sought connection online in an effort to stave off loneliness and lock in some romantic potentials to meet once it was safe. With the introduction of Mark Zuckerberg’s metaverse, coupled with an evergreen need for escapism now that we’re not so much asking when the pandemic will end but rather how we can best live with it, VR experiences will become more mainstream, on dating apps and elsewhere. I mean, even cows are using it to trick themselves into thinking they’re living a more enriching life.

In a Q3 earnings letter to shareholders, Match Group announced plans to roll out a dating metaverse called Single Town across some of the apps in its portfolio, which includes Tinder, Hinge, and OKCupid. (TBA which ones, and when — a Match spokesperson declined to comment further when Bustle reached out.) In Single Town, users in avatar form can meet matches for dates in virtual spaces and chat using their real voices. But Match isn’t the only online dating company to explore the virtual realm. The dating app Zoosk already offers a VR experience called “Great Dates,” in which matches can (virtually) tour foreign cities together. Second Life, an-avatar based social network that launched in 2003, has a dating site of its own called The Lonely Hearts Dating Agency. There’s even a dating app on The Sims, which is kind of like VR, once removed.

But since this all still sounds like The Future to many of us who aren’t already in the VR know, what can we expect from a metaverse dating experience (meetaverse?)? Dating coach Amie Leadingham theorizes that virtual meet-ups could exacerbate some of the already existing problems with online dating: It’s still not real life.

“The purpose of dating is to do it in person, to meet someone and have a relationship,” Leadingham tells Bustle. “I always tell my clients, meet people sooner than later because you want to get the real person in front of you.”

The trap of spending too much time messaging with an online match, building an emotional connection while looking at their photos (essentially, their 2D avatar), and then not feeling the connection when you finally meet them could apply to metaverse dating, too. “What if you fall in love with a visual avatar, and then you meet the person and there’s not enough chemistry?” Leadingham wonders.

Catfishing, of course, comes to mind. While she does wager that the body language, voice component, and experiential nature of avatar dates could make it easier to gauge chemistry than 2D photos and texting or even video dates, still, “nothing is going to beat the real deal, the real person.”

The video game quality of VR dating could also lead some users, especially those with avoidant attachment styles, to log on to pass the time and enjoy the high of receiving sexual attention, without any intention of ever meeting up in person, Leadingham says. As is, Gen Z already sees dating apps as a form of entertainment. It isn’t hard to imagine terms like “my VR girlfriend” or “VR boyfriend” entering the lexicon as a way to describe crushes you only flirt with in the virtual world.

But whether you take it off-screen or not, there’s no denying that chemistry between avatars is possible, particularly if you can hear someone’s real voice as you interact, even if their image isn’t true to life.

“One thing we do know about VR is that it’s emotionally evocative even if it’s not fully graphically high fidelity,” explains Albert “Skip” Rizzo, a psychologist and director of Medical Virtual Reality at the University of Southern California’s Institute for Creative Technologies, who researches how VR-based exposure therapy can treat PTSD patients. “One of the big [emotional] drivers in these visual environments is the sound. … The verbal element is still a good source of communication.”

Moreover, you can get a sense of who someone is by the way they choose to represent themselves in-avatar and, just like in real-life dating, which context they choose to meet you in. Like, for example, do they want to go to the bar, or do they suggest something more experiential, like a museum? Plus, without real-world distractions, like a rowdy adjacent table, “maybe there’s even more of a focus on the person,” says Rizzo.

VR dates might also provide a safer way to meet someone, a less intimidating option for singles who have been emotionally or physically burned from dating strangers, according to sex therapist Jessica Cline. “You don’t have to get all dressed up and wait and wonder ‘Am I going to be stood up, is this a waste of time?’” she says. “If it doesn’t feel right, you’re not stuck with the person and having these red flags go off. You literally can leave the experience. It’s empowering in that way.”

That being said, dating apps will need to establish VR safety protocols around things like harassment, consent, and privacy. “Like anything you do online, safety is very important, so make sure you don’t share your personal information just because it feels surreal,” cautions Leadingham.

For folks with disabilities, the ability to interact via an avatar has the potential to open up options. “Accessibility would be a concern for disabled users,” according to Gus Chalkias, program director of assistive technology services at the Helen Keller Services for the Blind. For instance, Chalkias, who is blind, says that “a lot of dating sites are not compatible with the screen reader, JAWS, that I use,” which provides braille or text-to-speech features for visually and hearing-impaired folks to access online content.

Chalkias also wondered if the avatars will be widely representative. “If the person is a wheelchair user, can they choose an avatar with a wheelchair?”

If they’re designed with accessibility in mind, virtual spaces could provide safe opportunities for disabled folks who can’t experience them in person — for example, a date night for somebody who has difficulty ambulating, or can’t go out due to COVID risk, he says. That applies to developmental disabilities, as well: “It could mitigate some of the [real world] stimulus that could be overwhelming to somebody on the [autism] spectrum,” says Chalkias.

Cline predicts “a boom of exploration” when it comes to VR sex and dating, as it provides a low stakes way to try out certain fantasies or try on different identities.

“You reveal what you like by experiencing it,” she says. When the time comes, may as well see if it’s for you — or maybe just your avatar.

Gus Chalkias, program director of assistive technology services at the Helen Keller Services for the Blind