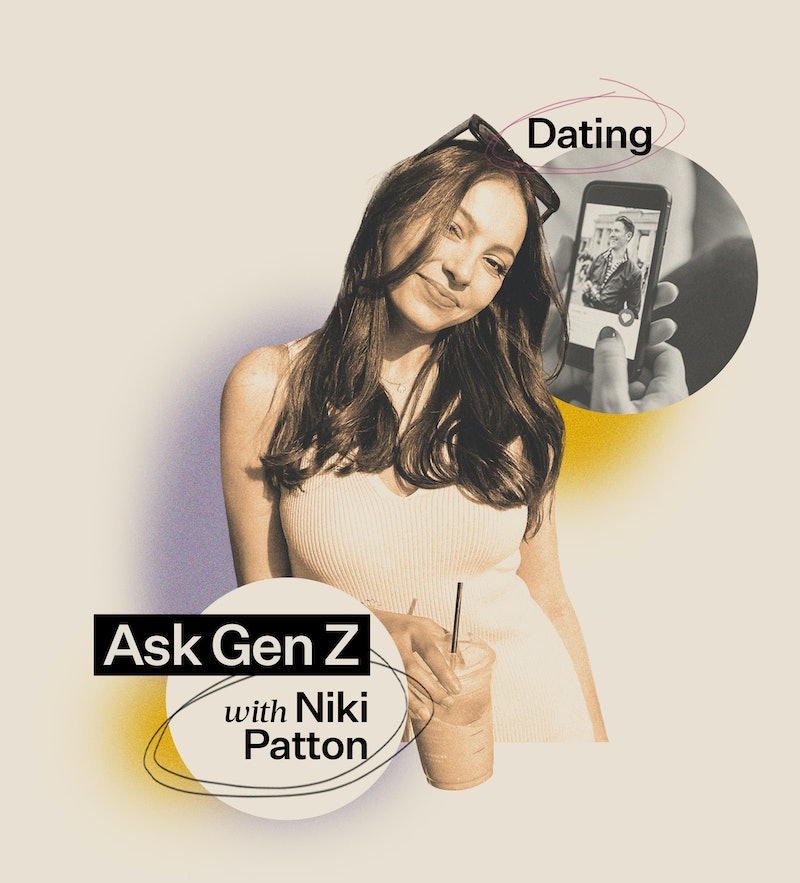 It’s been 10 years since Tinder debuted and millennials got their first taste of what would eventually become the default way to meet people. While at first, the novelty of swiping through profiles of potential paramours was thrilling, after a decade, most dating app users see the platforms as a necessary evil.

But a quick scroll of #datingadvice on TikTok confirms that Gen Z believes millennials can stand to optimize a lot about their dating app behavior — from texting with too many emojis to seeming desperate for a committed relationship in their bio. Among the elite in this category is Niki Patton, the self-described “big sis you didn’t know you needed,” who’s amassed 1.7 million followers with her advice-focused videos on topics like dating, friendships, and college life. (Yes, she’s built that audience while wrapping up a double major at Rutgers.)

While chatting with Bustle about dating culture, the 21-year-old New Jersey native says, “I think Gen Z is completely changing it because we don’t take things seriously.” According to Patton, when using apps like Tinder, Bumble, or Hinge there are some notable differences between the ways that millennials and Gen Z are swiping, and, as usual, the olds could stand to learn a thing or two.

Do you and your friends use dating apps to meet people, and why or why not?

Yeah. I think it’s actually a really fun way to meet new people in general, not necessarily people I’m romantically interested in. I recently went to Hawaii with some friends, and we were like, “Let’s just go on Tinder and Bumble for fun.” It’s just a game. I know that most people [my age] don’t take it so seriously.

So rather than looking for people to date, is it fair to say you’re mainly using the apps just to chat?

What do you think of Tinder’s new game-y features like Swipe Night and Vibes?

I think they’re just encouraging us to take it more lightly, which is a good thing. I feel like older generations use apps more seriously, but Gen Z is like, “I’m going to use this as a form of entertainment.” Sometimes you meet someone and it’s just really exciting. But for the most part, I feel like these features are playing into that.

If someone was using the dating apps to meet people, not necessarily for dating or a hookup, what do you think they should include in (or leave out of) their bio?

I think if people are there to look for hookups, they’re going to look for hookups, and they’re just ruthless about it. When you see someone who’s not taking the prompts as seriously, they’re kind of answering sarcastically, they put photos on there that are more about personality than a thirst trap — that’s when you know, “Oh, this person’s on my vibe.” You can put your intentions [explicitly] in there, but I feel they come through in the way you set up your profile.

From your perspective, in general, is it kind of considered cringey to expect to find a serious relationship on Tinder or the other apps now?

For me personally, I would not use a dating app [to find a relationship], but I know people my age who have met their long-term boyfriends on dating apps. Yeah, there’s people on there that are cringey, but if you find a gem in a dating app, that’s super rare. That makes it romantic.

A lot of older people will write something along the lines of “I’m looking for something serious” in their bio. Is it cringe when people are super intentional and earnest in their bio?

I don’t know. I would be kind of taken aback by someone being super serious in their bio, personally. I haven’t seen much of that in my age group, people being like, “I’m looking for love, I’m taking this super seriously.” So it would definitely stand out. You can make it clear to someone after you start chatting with them that you’re serious and you want to get to know them, but I don’t think there’s a need to put it in your profile.

What would you say are the best online dating routes for people who are interested in a committed relationship rather than a hookup or friends?

I don’t really think it matters what app you’re on, because I’ve heard good things about Hinge, Tinder, and Bumble. Getting to know anyone over the internet is hard, so I don’t think the channel matters. It’s just how you go about it.

What would you say are the best apps for people who are just looking for friends, or who maybe require forming a friendship before they date someone?

You kind of have to use dating apps if you want to get to know new people, because there’s not many other ways that you can find new people around you in your vicinity. But, I don’t know, when they’re called “dating apps,” that kind of makes it feel like you’re looking for something even if you’re not. And I wish they had more ways for finding friends. I know Bumble has Bumble BFF and things like that, and that’s super helpful, especially for recent grads who have moved to a new city. I think more apps should integrate features like that so that you can kind of convey that you’re not looking for anything romantic.

Do you think Gen Z is taking the lead on changing that?

One hundred percent. We all, especially after going through COVID, want connection with other people. I think that’s when we really got bored and were like, “Let’s just go on dating apps,” and you saw people start to make it more of a comedic entertainment thing than anything else. It should be just getting to know people, and if there’s a connection with someone, that’s amazing. But I think there’s too much pressure the way it’s set up.

Gen Z has this whole “romanticize your life” type of thing going on. The cutest way to meet someone is in public, when it’s unexpected. So I think part of the reason why dating apps had a stigma in the first place for me is because it’s not natural.

What would you say makes someone’s dating profile stand out?

Show your personality, show some funny selfies or something, something that makes it not so serious. Make somebody laugh. I’ve had to fix my friends’ dating profiles because they’re the sweetest guys ever, but all their pics make them look like tools.

Do you have any other thoughts on being less cringe on dating apps in general?

As soon as you meet someone on a dating app, if you’re really interested in them, get off the platform. Talk to them on FaceTime. All my dating videos, especially during COVID, were about FaceTime dates. With Gen Z, FaceTime dates have become such a huge thing now, and they’re so cute. There’s so much you can do if you’re just a little bit creative with meeting people online. Romanticize it!

*This interview has been condensed and edited for clarity.

More like this
Hinge's New NFAQ Feature Is Demystifying Queer Dating
By Emma Carey
Is It A Rebound Relationship Or The Real Thing?
By Carolyn Steber and Lexi Inks
Are Quality Time & Physical Touch Love Languages Compatible?
By Lexi Inks
Are Virgo & Capricorn Compatible In A Relationship?
By Kristine Fellizar
Get Even More From Bustle — Sign Up For The Newsletter