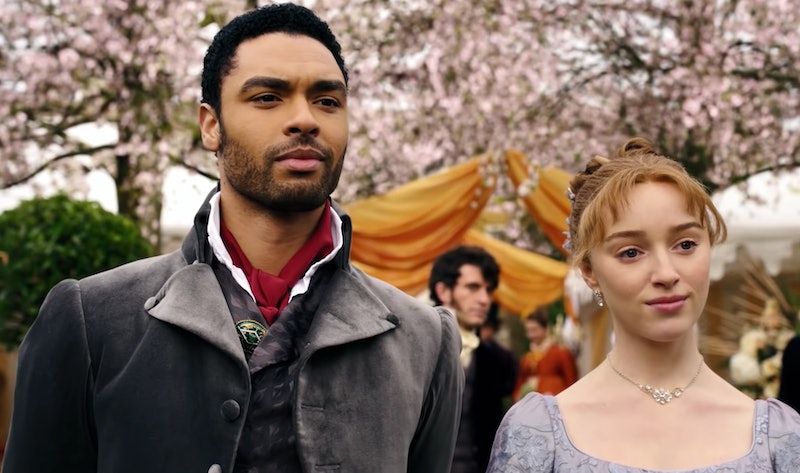 The new Netflix show Bridgerton is chock full of ornate costumes, saucy romances, hip violin covers, and language so fancy it sends you scrambling for the dictionary app on your phone. For instance, what's a rake? While it sounds like a tool used to scrape up leaves, the historical meaning is far juicier.

It's first used in episode one, when (spoilers!) the Duke of Hastings, Simon Bassett, is invited to dinner at the Bridgerton's house, all in an effort to match him with Daphne Bridgerton, one of the town's most eligible young women. Her sisters are chatting about how handsome he is when one essentially says, "yes, if you're into rakish dukes."

Bassett is known for getting around, along with his friend, Daphne's brother Anthony, who seems to be hooking up with a new woman every minute. And therein lies your hint as to what a rake is. In some ways, a rake is the 1800s version of f*ck boy; someone who will say all the right things, do the deed, and then never text again.

While modern day f*ck boys are known to be awful — according to Urban Dictionary, they "do whatever they want and don't care who they screw over in the process" — rakes have a bit more charm than that. And in some cases, they're even kind of OK.

Historical romance author Sarah MacLean, who writes rakish characters all the time, told Oprah Magazine, "A rake is a lovable scoundrel. There's a wide spectrum of rakes, and Simon of Bridgerton lands on the nicer end. Usually, a rake is someone who has been around and has had a number of relationships. He's probably pretty handsome. He's probably pretty charming." See? Way better than a f*ck boy.

But the word wasn't invented just to describe dashing men who steal hearts at early 1800s social gatherings. It's actually been around a lot longer. As Eileen Dreyer, author of Once A Rake, told Huffington Post, "Rake is the shortened version of rakehell, a term popularized by playwrights of the Restoration Period in the seventeenth century."

And rakehell, she said, is a derivative of the old English rakel, which means rash, as in acting before thinking. Rakes are exciting, they sweep you off your feet, are bad in a good way, and again, incredibly handsome. Case in point: Regé-Jean Page, the actor who plays Bassett.

Since then, the word has been used quite a bit in historical romance novels by modern day authors, like the Bridgerton series by Julia Quinn on which the show is based. Anyone who's ever laid in bed reading about an ill-advised couple stealing away to the drawing room will know exactly what it is.

While you might not want to hang out with a rakish man in real life, watching one on TV — or reading about one in a romance novel — is enough to make anyone want to lace up a corset and attend a ball.