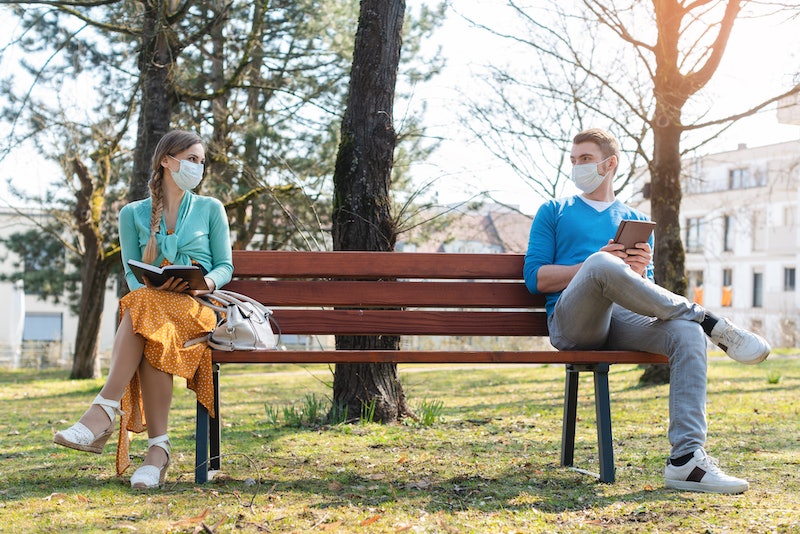 Emily, 26, says her relationship started as a whirlwind, in the best way possible. After meeting her boyfriend at the end of 2019, the two constantly went out to dinners, attended comedy shows, and met friends for happy hour. "Things were exciting and new," she tells Bustle. "And I was eager to spend time with him." But their relationship's momentum came to a screeching halt in March when her state's first shelter-at-home order went into effect. Her relationship was moving so slowly in quarantine, almost to the point of "glacial."

Unlike a turbo relationship, where a couple moves at warp speed because of COVID-19, a "glacial relationship" looks like a couple's timeline slowing way, way down. The pair might go from hanging out every night to not seeing each other at all while social distancing apart. And it can mean putting off major relationship goals.

For Emily, who was quarantined separately from her partner, self-isolation meant canceled plans to meet her partner's family and giving up on going on their first vacation together. "It felt like we were on such a high getting to know each other and blossoming into a perfect relationship," she says, "only to be cheated out of the honeymoon stage."

A glacial relationship can also delay even larger life decisions, like moving in together or getting married. Janelle, 29, says her partner of six years was set to propose, until COVID-19. "I thought we were on track to get engaged in 2020," she tells Bustle. "We had talked about it extensively and agreed to move in together once my lease ran out. Now, all of that has been put on hold."

I feel like a ticking time bomb when it comes to getting married.

According to Dr. Kathy Nickerson, a licensed clinical psychologist, the first and most obvious reason for the glacial effect is distance. As Emily and her boyfriend quickly realized, it isn't easy to continue getting to know someone when you're sheltering apart. And without the option to go out and have fun, you can begin to feel stuck.

"I’m almost 30, and I feel like a ticking time bomb when it comes to getting married and starting a family," Janelle says. "[My boyfriend is] so much older, but acts like he has all the time in the world. He doesn’t understand why I’m so stressed to move things along."

Quarantine-related stress also takes a toll and contributes to relationships slowing down. "When we don't feel good, we tend to shut down, retreat, and hide away," Nickerson tells Bustle. "When we're depressed, we feel like we have no energy or motivation to do anything." Couples might not choose to go on Zoom for a virtual date, even though it's typically a great option for those sheltering at home, or find other ways to stay in touch.

"We tried," Emily says, "and we did our best to make it work." But going from whirlwind date nights to not seeing each other during the quarantine peak meant she and her boyfriend started drifting apart. And the same was true for Stefanie, 29, whose relationship went glacial due to a lack of travel options. She and her boyfriend of eight months were gearing up for the future when quarantine began. They had plans to move in together, even though they were in a long-distance relationship — she was in Los Angeles, and he had just moved to Alabama.

"The fact that there's an unknown time frame of when we'll see each other (and the fact he also is taking care of a sick family member), gave him the lack of confidence in our relationship," Stefanie tells Bustle. "Having a long-distance relationship in the middle of a pandemic is a lot of work, and it's a true test to see what's worth it or not."

As Dr. Margarida Rafael, a licensed psychologist, tells Bustle, one of the benefits of glacial relationships is that they give you time to talk, get to know each other, and see if you're truly compatible. So, while some couples will thaw after quarantine, and pick up right where they left off, others can use the slow-motion nature of their relationship to their advantage — and decide if it's too icy to last. Some, however, might find that quarantine has left them permanently frozen in time.

"If we were still in the same town and able to see one another, the relationship would have lasted longer," Stefanie says. "But because of the quarantine and separation, it saved us time to realize that we were not meant to be together."

More like this
30 Clever Ways To Slide Into Your Crush's DMs
By Griffin Wynne, Carolyn Steber and Lexi Inks
How To Politely Reject Someone Who Keeps Asking You Out
By Laken Howard and Lexi Inks
Are Quality Time & Gift-Receiving Love Languages Compatible?
By Lexi Inks
20 Women Reveal Exactly How Long It Took Them To Get Over Their Ex
By Amanda Chatel and Lexi Inks
Get Even More From Bustle — Sign Up For The Newsletter