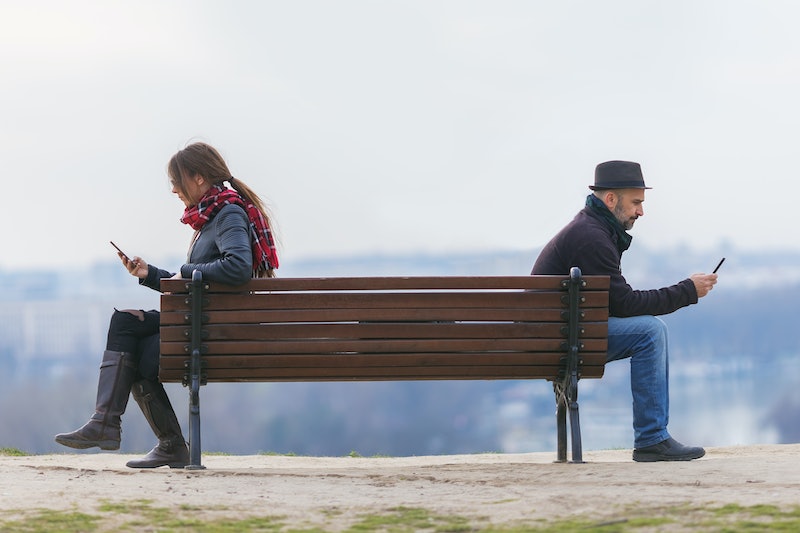 Trust, according to Dr. Lexx Brown-James, LMFT, is innate and learned from birth. As children, we look to those around us to determine, “Are you going to take care of me so I can survive?” Given the foundational role trust plays in our development, it’s no surprise that it’s also a crucial component to our future relationships with romantic partners. “Trust is integral. It is how we move through the world safely being and expressing who we are,” she tells Bustle.

Trusting others can also be difficult, especially if someone has betrayed our trust in past, Brown-James adds. But whether your own anxieties around trust or your partner’s actions are the culprit of any relationship tension, it’s helpful to identify some of the potential red flags that could indicate your partner may not be as trustworthy as you thought.

1. They Tell A Lot of Little White Lies

If you’re noticing that your partner is constantly raving about your mother’s cooking when you know it’s barely palatable, or waxing poetic about a holiday gift they received that you know they’ll never use, it might be tempting to assume all these little white lies add up to one big liar. And while there could be cause for concern, Brown-James points out that this might just be a person who feels highly unsafe giving their honest opinions, and needs more permission that their authentic self will be received with understanding.

Still, all this constant sugar-coating is not a recipe for relationship success. And it may be a sign that you can’t trust your partner to be themselves without the rose-colored glasses. Brown-James explains that you may need to level with them, saying something like, “You're not going to be punished if you tell me the truth. I need you to trust me to manage my own emotions around this, and I can't do that if you don't give me the truth.” Otherwise, she explains, it may lead to resentment in the relationship later down the line.

2. There’s A Lack Of Forthrightness About Themselves

While everyone has topics they don’t like to discuss, like a fraught or traumatic relationship with a particular family member, for example, if it seems like someone is constantly withholding information about their lives, that may be an issue. Brown-James says to be aware of someone who seems like they have a lot of secrets to keep.

“The issue becomes, ‘If you have so many secrets and you're not willing to share them with me as we're building something together, it tells me that you're not able to be truly vulnerable.’ And without vulnerability, there's a lack of intimacy,” she says.

If you’re looking to address this concern, first, Brown-James explains, you want to make sure you’re not just being nosy about a particular issue. If that’s not the case, she offers this script to get the conversation going: “Hey, I noticed every time we talk about your mom it seems to be a quick answer and a shut down. It's making me wonder, what support do you need around that? Would you be open to sharing about that, so I can know more?”

3. You Have A Constant Need For Follow Up Questions

If this exchange feels familiar to you, it’s a possible red flag for trust issues:

“Hey, where are you going tonight?”

“Who are you going with?”

“When will you be back?”

According to Brown-James, this type of conversation where you’re always needing to prompt your partner for basic logistical information is a concern. “It sows seeds of mistrust and doubt. It says, ‘How come I can't know where you're going?’” she says. And, she adds, it can foster a sense of insecurity for some people, leading them to wonder why their partner doesn’t want them to know where they are. It can even lead a partner to feeling unsafe.

“Outside of controlling abusive relationships, it's definitely a sign that the person needs a lot of independence. And maybe that much independence is not functional in a relationship,” Brown-James explains. Basically, if you’re constantly feeling surprised by your partners comings and goings, it’s a signal there might not be enough trusting communication.

4. There’s Too Much Caginess Around Social Media

The reasoning here is super practical. “Some people are assholes on social media,” Brown-James explains. “So are they the fat phobic jerk that leaves trolling comments under women's pictures? You would need to know that if you're going to decide to date them.” While everyone is entitled to a degree of privacy, if they seem overly concerned with hiding their online activity, that’s a red flag for trustworthiness.

If your partner is acting particularly defensive or accusatory, that’s a cause for concern. “If you're noticing they're snooping through your stuff and are always accusing you of something, there's a reason to raise your eyebrows,” Brown-James says.

There are a few potential causes behind this behavior. For one, it could be a facet of control or coercion. For another, it could be projecting. (Someone who’s cheating might be more likely to project that fear onto their partner, and go looking for evidence). Lastly, it might be insecurity and paranoia. And even if they are just insecure, Brown-James explains, that insecurity is only going to continue to increase, which will be problematic for your future.

6. You Have A Gut Feeling Something’s Off

Our sense of intuition can be hard to trust. After all, it’s not exactly empirical data. But according to Brown-James, if you have a gnawing feeling that something is wrong and your partner is untrustworthy, that matters. “As children, we're taught to betray our gut early on,” she explains. Think of all the adults in your life who coached you to give someone the benefit of the doubt when they might not have deserved it, or assured you, “That’s not what he really meant,” even when that wasn’t the case. “We tend to build in the sense of doubt as we grow up. And sometimes it's to our detriment and it hurts us,” she says. “

“I don’t trust my partner” is a legitimate feeling worth investigating.

Don’t let your anxieties spiral into full-blown paranoia, but if your gut tells you that something is off, bring those concerns to your partner. With an empathy-driven conversation, you may get to the bottom of your issues surrounding trust.

More like this
7 Women Share Their Best Orgasm Stories
By Lexi Inks
Expert Tips For Being On Top When You're Plus-Size
By Lexi Inks
The Best Time To Date After A Breakup, According To Experts
By Bustle Editors
20 Things You Should Never Tolerate In A Relationship
By Rachel Sanoff and Kathleen Ferraro
Get Even More From Bustle — Sign Up For The Newsletter