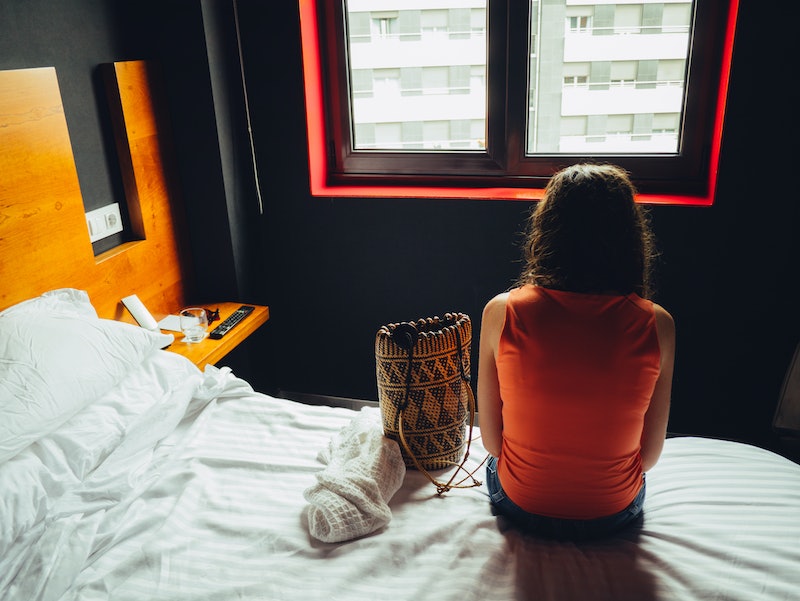 While it's possible to make a clean break from a toxic partner, and begin to move on with your life, the side effects of coercive control can impact your next relationship. Coercive control is a subtle but insidious form of partner abuse, Dr. Judy Ho, PhD, ABPP, ABPdN, CFMHE, a clinical psychologist, tells Bustle. And that's why its side effects can stick around even after the relationship has ended.

There are many forms of abuse, but Ho describes this one as "a pattern of behavior that seeks to take away the victim’s freedom, self-esteem, and efficacy, to gradually strip away their sense of self and confidence so that they become completely dependent on the abuser for all of their needs. It can include verbal threats, humiliation, degradation, and intimidation."

If you experienced coercive control in the past, your partner may have monitored your every move, called you names, or blamed you when things went wrong in the relationship, Ho says. Your ex likely found ways to isolate you from friends and family so that you had to rely on them. And they may have controlled access to the internet, your phone, or your money, for the same reason. Since it's based in control and manipulation, it's difficult to get away from someone who is using these tactics — and often even more difficult to mentally move on, once you have.

How Coercive Control Can Affect You In The Long-Term

After being subjected coercive control, it's not uncommon to develop symptoms of PTSD (post traumatic stress disorder), Ho says, which will leave you feeling "hyper-vigilant" and unable to make your own decisions. You might also develop a warped sense of what is "normal" and what isn't when interacting with new partners. For example, it'll feel strange to be with someone who is loving and supportive, since coercive control leads you to believe that "love" feels more like oppression.

Since you aren't sure what a healthy partnership looks like, it's possible you'll find yourself back in another toxic relationship, or turning to familiar habits and patterns. This is way more likely to happen if you have PTSD or have experienced more than one instance of abuse in your life, Ho says, as that normalizes abusive conduct over time, to the point it's tough to recognize toxic behavior. As a result, you might not be sure when it's time to walk away from a person who doesn't have your best interests at heart.

How To Overcome The Effects Of Coercive Control

It isn't easy to spot coercive control when you're in the middle of it, much less recognize its lasting side effects. But if the signs sound familiar, there's plenty you can do to shake yourself free. One of the best places to start is by making an effort to heal before dating again. "Instead of jumping into another relationship, lean heavily on trusted loved ones like family and good friends for support, and start doing things on your own again without help," Ho says.

Practice relying on yourself and rediscovering what it feels like to stand on your own two feet. "It’s really about a process of getting to know yourself again and honoring who you are," she says, "and building a resilient sense of self that isn’t tied to how someone else is feeling or acting on a given day."

It's also important to reestablish a sense of safety. Ho recommends meeting with a therapist to unpack what you've been through, and to practice coping mechanisms like mindfulness, which will come in handy if you're dealing with symptoms of PTSD. From there, make a point of surrounding yourself with positive role models, like a friend who's in a good relationship. As Ho says, "It is important to know the signs of healthy relationships just as much as knowing the signs of unhealthy ones."

But above all else, take your time. Not only will doing so give you a chance to heal, it'll make it easier to spot toxic people. ""People who coercively control are often very charming at first before they get you very committed to them, then they start to act in ways that are controlling and abusive," Ho says. "So go slow. Pay attention to possible warning signs and heed them, instead of making excuses for the person."

Editor's Note: If you or someone you know is experiencing domestic abuse, call 911 or the National Domestic Violence Hotline at 1(800) 799-SAFE (7233) or visit thehotline.org.