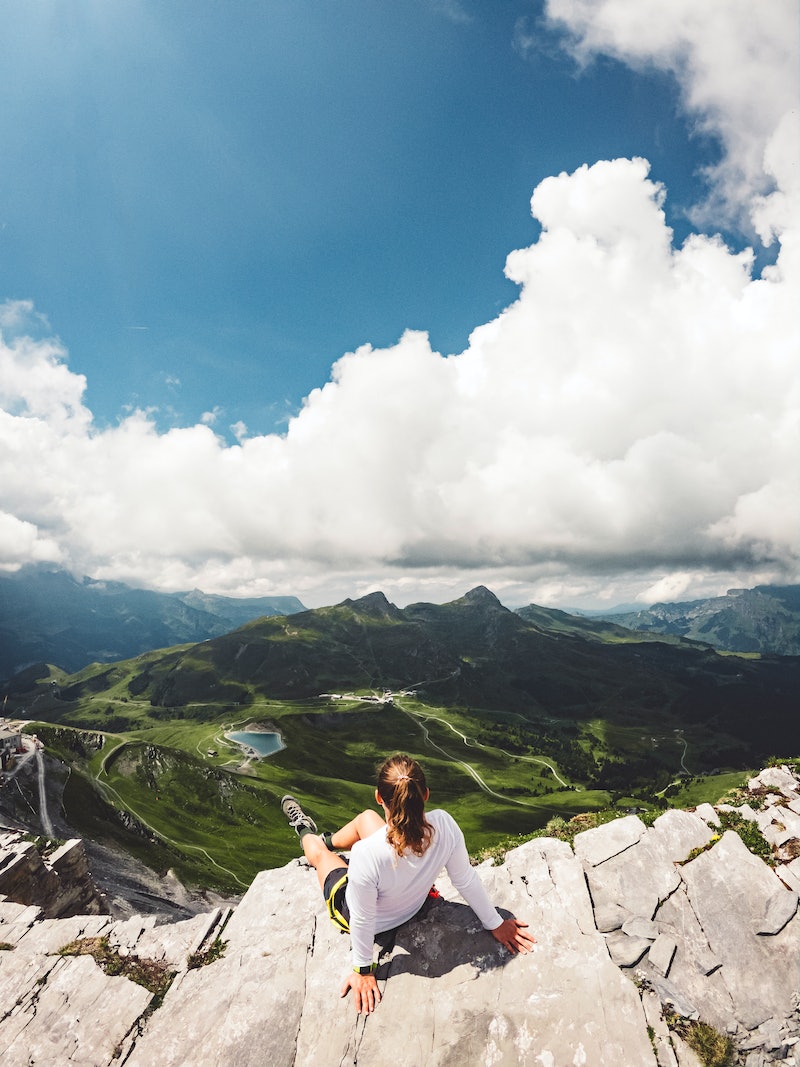 Figuring out how to balance being generally informed about the world's goings-on and making it through a news cycle without wanting to scream is... tough. Sure, it's important to stay on top of events that impact you and your fellow humans — but it's no secret that constant exposure to negative news isn’t doing your mental health any favors.

According to the Anxiety and Depression Association of America (ADAA), endlessly seeking out more information about something that stresses you out can be a form of attempting to control your anxiety. But that often backfires, with information overload making anxiety worse instead. If the news you're consuming isn't giving you new information that will tangibly help your life in some way, you might want to reevaluate whether all that scrolling is making you feel better or worse.

That doesn't mean you have to resign yourself to knowing nothing, though. Clinical psychologist and award-winning podcaster Ellen Hendriksen tells Bustle how to tell if you need to cut back on your news consumption, and how to still learn what you need to know.

You're Experiencing Physical Signs Of Anxiety In Response To The News

If today's news stories have you worried about your civil rights or your safety (or both), then your body could start seeing the news as a very real danger. "If you're of a demographic or a belief system that is being targeted, the news can be a threat," Hendriksen tells Bustle. Unsurprisingly, when you start to perceive the news as dangerous, your body's fear response kicks in to protect you.

Hendriksen says that while the body's "fight or flight" response is awesome for keeping you alive, it's not super useful when there's a 24-hour news cycle keeping us in chronic stress. Additionally, since "fight or flight" prepares our bodies to either run away or Hulk out, physical symptoms are always part of the package. "Our blood rushes to our major muscle groups so that we can run or fight, we become hyper-vigilant so we can scan the environment and see where the threat is coming from," Hendriksen explains. "We lighten our load by having to go to the bathroom so we can be more nimble or run faster, and we hyper-focus on the thing that could be a threat." Hendriksen also points out that chronic stress can cause things like a tight jaw, sore neck or shoulders, gastrointestinal problems, sleeping difficulties, and difficulty concentrating.

Another physical sign of anxiety to be mindful of is a tendency to hold your breath whenever you're scrolling through social media or checking the news. If the news makes you so anxious that you literally stop breathing, that's a clear indicator that you need to cut back on your news intake.

You're Having Burnout Symptoms

Whether you're a journalist, a professor, or simply a person with a social media account, then you can probably empathize with feeling exhausted and unmotivated whenever you think about checking the news.

Hendriksen says the three cardinal signs of burnout are fatigue, resentment, and working harder while achieving less. If any of that sounds like your current relationship with all things news-related, then you're probably burning out on updates. According to Hendriksen, this means you need to start paying closer attention to what drains your energy and what replenishes it.

Does switching off social media after 8 p.m. spark joy? Does your body get that much tenser when you check for all the updates while your coffee is brewing? Maybe talking to friend A about politics makes you both riled up and hopeless, while long chats about the state of the world with friend B actually makes you feel like everything might not be a complete disaster. Examine these dynamics in your own life and try to replace the draining activities with replenishing ones. Hendriksen recommends working in as many energy-boosting activities as possible, but she says it's equally important to "minimize the energy-draining activities to what you need to do, but no more than that."

If you've been dreading dinner with your election-obsessed relatives, or you're literally afraid to check your Twitter feed these days, it's likely a sign you need to step away. "Dread is just another word for anxiety," Hendriksen says, "so that's certainly a warning sign that you're not feeling safe."

Hiding out can seem like a good idea when you're feeling threatened, but Hendriksen says it may not be the greatest long-term solution. Instead of avoiding all your Zoom social calls or deleting your social media entirely, Hendriksen suggests answering all the "what ifs" that might be worrying you. Whether you fear getting trapped into a political conversation with your uncle or you just don't want to see another terrible event pop up in your news feed, figure out exactly what you're afraid of. This way, you can come up with a few options for dealing with it. As Hendriksen explains, "If you can plan to engage with the thing that you're dreading, that can be very soothing because then you have a plan of action ... It kind of reminds your brain that you can deal with this, that you're capable."

You Just Want Everyone To Stop Talking About The News

If your bestie's mere mention of the latest world disaster has you wanting to scream, it might be time to learn how to set boundaries around political conversations. "Think ahead about what you're willing to listen to, what your patience can stand, what is healthy for you, and what topics might be OK to talk about."

If you're in a larger social setting when politics come up, there's nothing wrong with simply removing yourself from the conversation. If, however, you're stuck in a small Zoom room, or your uncle's maneuvered you into discussing Trump's COVID diagnosis, know that it is possible to change the subject without starting an argument. Hendriksen suggests the sandwich method, where you give a compliment, constructive feedback, and transition back to a compliment. "You can do a similar thing with trying to change the subject — so give a compliment, and then change the subject to something that you're more comfortable with that flatters them." You could give your uncle props for being informed about Trump’s latest hospital visit, and then immediately ask how his kids/pets/job are doing. You can also always use the good, old-fashioned, "I disagree with you, but I'm not willing to discuss it anymore right now."

It Feels Impossible To Cut Back On Your News Intake

If you want to cut back on the news without becoming a hermit, Hendriksen says you can filter what you can control. "News is like a fish that grows as big as the tank you put it in," Hendriksen says. "If our whole day is open to absorbing news through email or alerts or whatever, then it's going to take up a lot of time and a lot of headspace."

Rather than checking the news every hour, Hendriksen suggests designating a couple of brief news check-ins throughout your day. Hendriksen also advises against checking your phone for news alerts first thing in the morning — including social media — since waking up to bad news could easily set a negative tone for your day. If you feel like you might benefit from a total news fast, that's completely fine also. "It's certainly OK to unplug and focus on things you value and enjoy, just to get it out of your system," Hendriksen says. So there you have it — permission to do whatever you need to protect your mental health.

This article was originally published on March 29, 2017