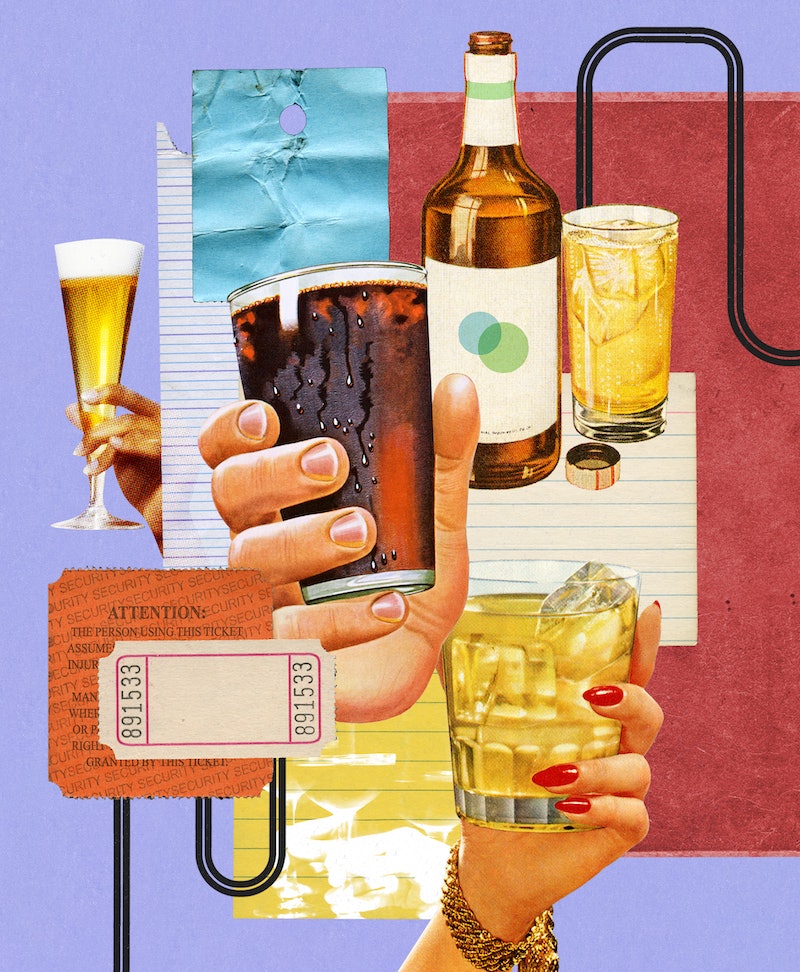 It was an average night at home eight months ago for Elizabeth*, 39, when she realized she was drinking too much. “I had my lightbulb moment when I was sitting at home alone and I'd drunk two bottles of wine while doing my emails,” she tells Bustle. “I drank at a pretty average level before the pandemic, I think, but being home all the time, it just escalated.” She called her best friend, asking what to do about the issue, and the two have been sober buddies ever since.

As Elizabeth experienced firsthand, the pandemic changed people’s relationship with alcohol. A study published in JAMA Network Open in 2020 found that women in the U.S. increased their “heavy drinking days” (meaning four or more drinks in a few hours) by 41% in 2020, compared to 2019. The Priory Group, a behavioral care provider in the U.K., saw an 83% increase in inquiries about help with addiction from 2020 to 2021. But even prior to the pandemic, drinking was on the rise: A 2019 review of data from 2002 to 2017 found that while people overall drank less, women aged 21 to 44 increased their consumption of alcohol, in terms of both moderate and binge drinking.

Drinking can be labeled as “excessive” in a number of ways, Jeffrey Morris, LMSW, a primary therapist at substance abuse treatment center Sierra Tucson, tells Bustle. “If it’s impairing the individual from fulfilling their work obligations, negatively impacting relationships, functions as a primary coping mechanism, and is tied to an inability to limit alcohol intake,” he says, their drinking may be a problem.

But you may still be drinking to excess without that level of impairment, experts say. Here are 15 signs you may be drinking too much.

1. Your Social Life Revolves Around Alcohol

If your entire life outside your house — or inside it — requires alcohol to function, you may have an issue, Peg O'Connor, Ph.D., professor of philosophy at Gustavus Adolphus College and author of Life on the Rocks: Finding Meaning in Addiction and Recovery, tells Bustle. “You might find yourself wanting to spend more time with people who like to drink rather than friends who don’t drink." You may also want to stay at home alone drinking rather than going out, or find yourself isolated, she says.

Finn*, 29, who’s been sober for two years, tells Bustle, “I used to get really grumpy when people planned going to places that were dry. I'd sneak alcohol on hikes or to picnics and think I was being really cool and fun, when actually I was just ruining the vibe entirely.”

2. You Fear Running Out Of Alcohol

If you actively crave alcohol and become fixated on behaviors or tasks that mean you can get some — like getting to the grocery store before closing to buy wine — that may be a sign of excessive drinking, says Morris. And fear may motivate you, too. "If you live in a state with laws prohibiting the sales of alcohol on Sunday, Saturday night may be a source of concern for you. If the weather is bad, you might tell yourself to buy some extra 'just in case,'" O’Connor notes.

3. You're Annoyed When People Drink Slowly

You’re desperate to get in another round, but nobody seems to be on the same page. “When you’re drinking with others, you may be irritated if your supply has run out or others around you appear to be drinking too slowly for you,” Dee Johnson, MBACP, MNCS, an addiction therapist at the substance abuse treatment center Priory Hospital Chelmsford, tells Bustle. You may find yourself wishing other people would hurry up and finish their drinks so that you can get another.

Pregaming before every social event — or, indeed, any event that may be stressful — is a signal you may be drinking too much, Morris says. "The idea is to get a head start as a way to loosen up or even save money,” O’Connor says. “You may tell yourself that a bottle of wine only costs $10, which is cheaper than buying two drinks at $8 each. While you might intend to have only one drink out, you may have that second.”

5. You Always Have Drinks In Photos

“It’s actually alarming how many photos have me with a cocktail or me with a whiskey,” Briony, 28, tells Bustle. “My mom genuinely complained at my sister’s wedding that there wasn’t a single ‘nice’ photo in the bunch of us together, without me holding a wine glass and looking trashed.” The experience made her reassess how much she was drinking at parties, and she started committing to staying sober at social events, she says.

Morris says that if you’d like to determine if your drinking has become excessive, you can do a simple memory exercise. Think of five to seven memories or moments where you felt your drinking was becoming unmanageable. Maybe it meant that you did something really unsafe, like driving drunk, taking a dangerous bet, or nearly burning your kitchen down at 3 a.m. He recommends using these memories to commit to sobriety or cutting down on drinking: Whenever you feel like a drink, pull one of them into your mind. “I stopped drinking entirely because I fell out of a window, true story,” Kai, 30, tells Bustle. “It was a ground floor window, but that was not a fun night.”

Drinking to excess releases inhibitions and impairs decision-making, which means you can get into some dangerous situations. A 2011 study published in Experimental and Clinical Psychopharmacology found a strong link between heavy drinking and risk-taking.

7. You Can’t Limit Yourself

If you choose alcohol over water too often, or you don't alternate between alcohol and water when drinking, you might have a drinking problem, advises dietitian and nutritionist Elizabeth Ann Shaw, MS, RDN, CLT. Morris notes that people who are reliant on alcohol will try to set themselves limits — like one glass of water after every alcoholic beverage, or sticking to a certain number of drinks — and consistently fail to obey them.

Johnson says abstinence may be difficult too. “Have you tried to commit to a few days of abstinence and not managed it, or have consciously counted down the days until you can drink again?” If so, that may indicate that you’ve started to develop a dependence on alcohol.

“I think it all crept up on me,” Elizabeth says. “I'd want a glass of wine whenever there was something stressful, and I live alone — I'm in a long-distance relationship — so nobody was there to monitor it except for me.” She says staying sober has become easier as lockdowns have eased. “When something terrible happens, I can just go for a walk or grab a coffee.”

8. You Feel Weird When You Don’t Drink

“You might have a feeling of weirdness or general discomfort if you don’t drink regularly,” Johnson tells Bustle. She says that people who’ve developed dependences on alcohol can feel groggy, tired, and get headaches when they’ve gone without a drink for a few days.

“Going sober for the first time felt appalling,” Briony says. “I hated it. I felt like I was going to have a headache forever.”

9. You Have Super Dry, Unhappy Skin

If you have really dry skin and feel dehydrated often (your mouth might be dry or your pee might sting), it could be from excess alcohol, nutrition expert Liana Werner-Gray tells Bustle. Alcohol is dehydrating, and having more than eight drinks a week is also associated with more upper facial lines, under-eye puffiness, and burst blood vessels on the face, according to a study published in The Journal of Clinical & Aesthetic Dermatology in 2019.

10. You Feel Hungover During The Week

Feeling hungover is a clear indicator of drinking too heavily, says Werner-Gray. To make it even worse, if you're hungover during the week, not just after a Saturday night out, and it's compromising your productivity at work, then it can be an indicator that your body’s not functioning well without alcohol in its system. What’s more, in people who drink to excess, hangover symptoms are often consistently worse and may last longer than in people who drink more moderately, according to a study published in the Journal of Clinical Medicine in 2019.

“I felt like crap all the time, but I had a stressful job, so I thought it was work-related,” Finn says. “Turns out, not so much.”

11. You Miss Deadlines, Appointments, Workouts, Or Other Commitments

Two big signals of alcohol misuse, Morris says, are an inability to fulfill work or family obligations, and a lack of productivity because hangovers and drinking get in the way. If you're bailing on your workout regimen or social or work obligations on the regular, then it could be linked to excess drinking and the resultant brain fog and physical impairment that accompanies it, advises Werner-Gray.

“I would just write off the entire day after a party,” Briony says. “I’d cancel or say in the days beforehand that I was feeling sick, so I had a ready excuse at hand.”

12. You Use Alcohol To Express Yourself

If the only way you can tell people you love them, or say how you really feel about your job or relationship, is when you’re hammered, that may be a sign of dependence, Morris says. “Excessive drinking allows for an individual to tap into an aspect of emotional fulfillment they are not able to discover elsewhere,” he says. If drinking helps you express certain emotions that you typically “reject, lock away, or suppress,” you may be relying on it for emotional health.

13. You Drink To Avoid Difficult Feelings

There’s a flip side to emotional expression and excessive drinking, Morris says: keeping things bottled up. “Often, individuals hyper-attach to self-destructive behaviors like excessive drinking, as a way to avoid certain core feelings,” he says. They may be feelings the person isn’t ready to experience, or really difficult emotions they want to get rid of entirely; drinking helps people avoid these feelings by blunting their impact. A study in the Journal of Consulting and Clinical Psychology in 2011 found that people who had difficulty dealing with negative emotions were much more likely to develop issues with alcohol than people who didn’t.

14. The Thought Of Drinking Gets You Through The Day

Johnson says that those daydreams about the first cocktail of the evening may be a sign that your brain’s become dependent on alcohol. “If we are drinking as a reward, such as always feeling a bit better when you know it's ‘drink o’clock’ after a day’s work, our brain is learning this as a prize worth repeating,” she says. Morris says that if you use alcohol as a “primary coping mechanism” for daily stress, it’s a signal you’ve become reliant on it.

“One of my friends fell pregnant, and after she told me she said, ‘Promise me you'll still be my friend when I can't drink with you for nine months,’” Finn says. “And I just thought, ‘Oh, sh*t.’ Because that was exactly what I was wondering too.”

15. Your Friends & Family Are Worried

If your relationships with family and friends are deteriorating due to your drinking, Morris says, it could be a problem. Whether they’re voicing their concerns, or you find that arguments spark off when you get together and have been drinking, alcohol could be at the root of the issue. “Your mood might also change, as you become defensive and irritated if you’re challenged on how much you drink,” Johnson says.

“I felt really sad that I had let down [my sister] on her big day,” Briony says.

This article was originally published on Feb. 16, 2017