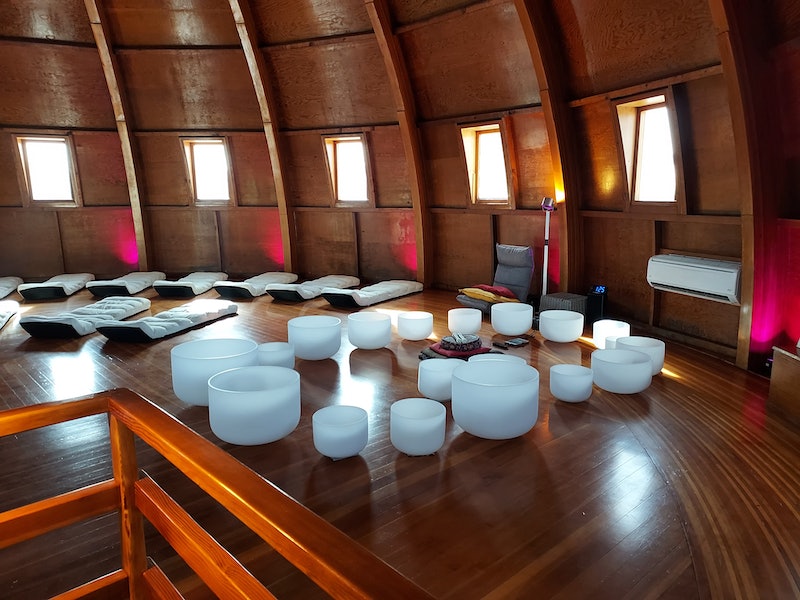 After an hour of listening to gongs tuned to the sonic frequencies of my chakras, I stumbled out of the white, domed building into the Joshua Tree sunshine. Keeping my phone on Airplane Mode, I collapsed into a nearby hammock. To my left were Adirondack-style chairs crafted from snow skis; to my right, a knee-high statue of the Virgin Mary was being worshipped by tiny plastic T-Rexes.

I’d decided to spend part of my first vacation after a very long lockdown partaking in a sound bath at the Integration in Landers, California, a well-known destination for UFO enthusiasts. If you’re not familiar, a sound bath is a meditative experience where attendees are submerged in sounds typically produced by healing instruments such as gongs, singing bowls, chimes, or tuning forks. Their purpose is to ease the nervous system and dissipate any energetic blockages typically associated with our emotions and both conscious and subconscious thoughts, much like some of the benefits of yoga. The Integratron’s sound bath experience is extra special specifically due to the acoustics of the structure and the precise location.

Located in a fairly desolate area of the Mojave Desert where you’d expect tumbleweed to roll by your car, the Integratron looks similar to the dome you may find at an astronomical observatory. Red nodes surrounding the circumference of the building make it look straight out of a sci-fi comic book but with short palm trees and cacti nearby. UFO murals, religious relics, indigenous proverbs, dinosaur figurines, and junkyard artwork make for a one-of-a-kind design aesthetic that could truly only fit the likes of Southern California’s High Desert.

The man who built the structure — George Van Tassel, an aeronautical engineer, author, inventor, and UFO advocate — designed it based on Moses’ Tabernacle, the writings of inventor Nikola Tesla, and telepathic directions from extraterrestrials. Also making it otherworldly is its location: It’s set atop an area of already high geomagnetic energy (the magnetic energy from the Earth’s interior radiating out of the planet), known as a vortex, and above another very rare phenomenon for the desert — an aquaphor or underground reservoir. And, as if all of this wasn’t enough, I attended my sound bath on the day of the full moon in Taurus and the lunar eclipse. Whatever was going to happen, I knew I needed this far-from-my-normal experience.

Upon entry into the white dome in the sand, we were greeted by the son of one of the owners, Michael Acquino, who briefly explained that we were to take off our shoes, turn off our phones, and abandon our belongings on the main floor before heading up to the second-floor meditation room for the hour-long experience. We were also introduced to his cousin and resident sound therapist Joe Karl, who would be playing the quartz bowls.

Acquino instructed us to leave the circular ground-level floor and walk up a set of steep wooden stairs one by one. In the domed room above, we saw the bowls. There were seven in different keys — C, D, E, F, G, A, and B, representing the root, sacral, solar plexus, heart, throat, third eye, and crown chakras, respectively. A small altar with images and little statues of all different gods, spiritual beings, and plenty of crystals was off to the side. We each had a cushioned mat with a little elevated headrest to lay on. I found my mat, covered it in the freshly laundered sheet they provided, and prepared for the ride.

To kick off the sound bath, Karl instructed us to focus on gratitude, have intentions ready, specifically in light of the full moon and lunar eclipse that evening, a time meant for “major revelations, endings, and twists of fate” no matter how uncomfortable they may be. He offered each of us the opportunity to stand in the direct center of the building and say what we were grateful for out loud.

I stood in the center of the huge domed space made only of wood in my white Nike socks and said, “I’m grateful for the changes in me that the last 12 months have brought.” My voice significantly vibrated up through my feet and up through my shoulders. It didn’t sound loud per se, but it felt as though I’d walked up to a mic on stage in an empty auditorium.

For the next 30 minutes, there was no talking as Acquino played through the quartz bowls. I viscerally focused on important moments of the last year and expressed gratitude for the changes in me that I’m so proud of but that are admittedly new, uncomfortable, healthier, and much different than in the past.

This obviously brought a range of emotions — about life through year two of a global pandemic, among other things — so I used this time and the vibrations to truly surrender to them in hopes of releasing them by the end of the session. As I went through my last year in my head, different sounds aligned from the bowls brought different sensations from nearly floating to feeling like I was under my weighted blanket. I only got a little distracted by the tiny snores coming from those who reached optimal relaxation.

With all of the time I spent repeating my gratitude for the life-altering experiences of the last year, I came to recognize the focus came from centering these people, places, and changes as just that — experiences. And with this very focused period of gratitude, I hope that I’ve been able to release the attachments to individuals and timeframes and find that I have lived them all. This centering felt great.

I was unexpectedly exhausted for the hours following, particularly after getting such a sound sleep in Pioneertown the night before. It was different from oversleeping — I felt wide-eyed and raw, kind of similar to right after you get a good cry out. I don’t remember feeling this way the first time I experienced a sound bath at the Integratron, but there weren’t any major astrological events happening, and pre-pandemic, I had a habit of falling asleep during most lying-down meditation practices.

While I don’t know that I’d make sound baths a regular thing, I do know I’d love to do it again at the Integratron. Whether it was truly the special energy of the location or the practice and process itself, it afforded me a much-needed pause to reset — and now, I think I need to get a hammock for my rooftop.