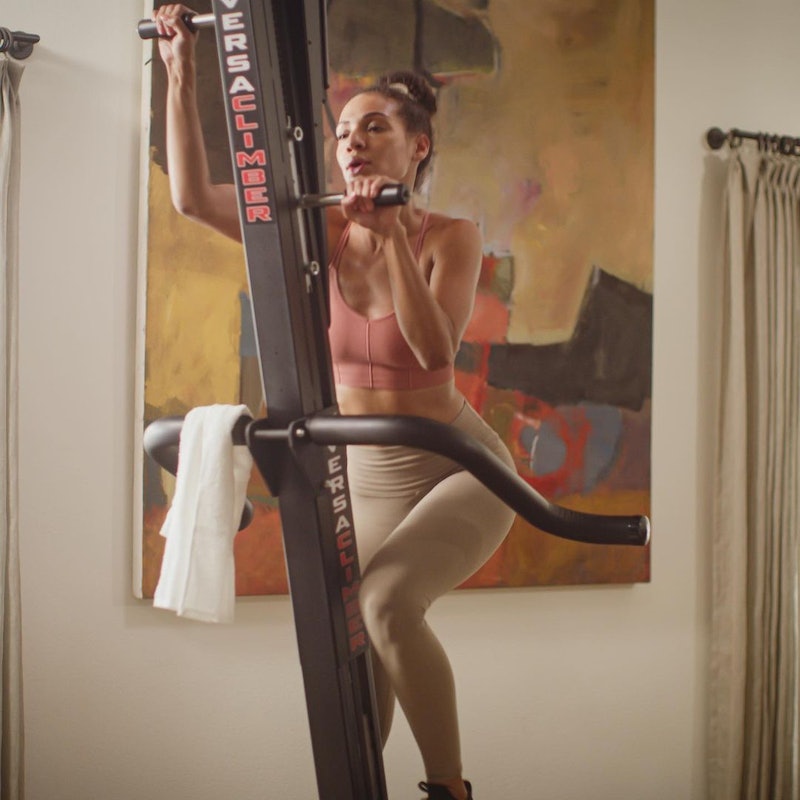 Just when I thought I had tried every unusual workout imaginable — from barbell HIIT to kickboxing-and-treadmill intervals, paddleboard yoga, and pool cycling — the VersaClimber entered the scene.

I had heard through the grapevine that a new workout studio called Rise Nation was opening in New York City (5 minutes from where I lived, no less) and would soon start offering a very unconventional way of working out with the VersaClimber machine. The premise? Exercising on this piece of equipment — which looks almost like a rowing machine that’s standing up — mimics the natural motion of climbing and allows for an intense, sweaty, low-impact cardio workout.

The VersaClimber, which has actually been around since 1981, has garnered quite a celebrity following. Lady Gaga, for one, has claimed to practice singing on her VersaClimber before big performances in order to train her cardiovascular endurance. Jennifer Aniston has proclaimed her love of the workout machine, and Lebron James owns not one but three VersaClimbers, according to ESPN.

My first Rise Nation class left me sore and breathless, sure — but also an instant convert to the cult of vertical climbing. Read on for everything to know about working out on a VersaClimber machine.

What Is A VersaClimber?

To move on a VersaClimber, you have to simultaneously push and pull on the contraption’s handlebars with your arms as well as against the pedals with your legs. There is a choice between taking full, elongated strides or faster, choppier ones by coordinating the lower and upper halves of your body. Abigail Olshavsky, a Rise Nation instructor in NYC, likens the movements to a “vertical mountain climber.”

During the workout, full-body activation is achieved: your quads, hamstrings, calves, glutes, abs, back, and arms are working the entire time. It’s up to you how much gear resistance you want as you’re climbing. Naturally, higher resistance optimizes the workout’s strength components while lower resistance (and a higher speed) targets more of your cardiovascular endurance.

The particular VersaClimbing classes I took were only 30 minutes long, which proved to be more than enough time for taking advantage of all the functions of a vertical climber and feeling its effects afterwards. However, there is no “restriction” on the length of a VersaClimber workout; because of its low-impact nature, longer durations are very much doable at a measured pace and with high resistance... if you’re up for the challenge.

The machine isn’t just for use at Rise Nation classes, BTW — you can access it at certain Equinox and Lifetime Fitness locations as well as other fitness studios, or you can purchase one for your home gym.

The Benefits Of VersaClimber Workouts

Since VersaClimbing is a more non-traditional way of exercising, it can help strengthen muscle groups you may not be working otherwise. “The muscles in your hands and fingers and forearms are all engaged because you're holding onto the handlebars and gripping hard,” says Olshavsky. And grip strength is important for activities in your everyday life, like opening jars and lifting heavy items.

For people with injuries or mobility limitations, VersaClimbing also provides a sustainable way of increasing your range of motion without promoting further damage. Keegan Ross, PT, DPT, SCS, CSCS, a performance specialist and physical therapist at EXOS, an athletic facility that trains the likes of NFL draft picks, attests to the benefits VersaClimbing gives his rehab patients.

Ross believes that the VersaClimber’s cardio counterparts, like the stationary bike, provide less metabolic demand. After all, the fact that the VersaClimber “stresses” the whole body allows for an estimated 300-800 calories to be burned in just one 30-minute session, according to the Cleveland Clinic.

In a workout class setting, VersaClimbing is also a great way to infuse friendly competition and motivation into your exercise session. The climber records stats like your pace and the amount of feet climbed, and some studios show these metrics on leaderboards during class (much like in workout studios like CycleBar and Orangetheory). “I might have a group of athletes going through a 10-second sprint with a minute recovery, and I can easily compare [them] to one another based on how many feet they climb in that interval,” Ross says. “It automatically creates competition, engagement, and pushes the envelope of the entire group.”

What To Know Before Trying The Workout

VersaClimbing’s learning curve is quite steep, but this is not something that should discourage you from trying. I remember the first time I got on a climber, it took me a while to “recalibrate” my body and attain the proper flow of motion. After a while, though, moving on the machine began to feel like second nature.

If you’re trying a VersaClimber workout for the first time, Olshavsky recommends arriving at the studio early so you can work with your instructor on nailing the basics before class begins. “[At Rise Nation] we set new participants up in perfect body formation in order to avoid injury, get the most out of the workout, and just make sure they're doing it properly,” Olshavsky says. Something to note? “We also tell first-timers that, while it sounds scary, it's actually totally normal for your hands or feet to feel like a slight numbness or tingling. Holding on to something for 30 minutes just isn't something we do in our day-to-day life.”

As mentioned, a gym membership is not necessary to start your climbing journey: vertical climbers can be set up in bedrooms, living rooms, and offices for daily use. Though the OG VersaClimber costs $3,195 for the base model, there are many alternative climbers you can buy that offer the same motion for less. Whichever way you go, Ross points out that the climber has a small footprint compared to other pieces of fitness equipment, which is a huge perk if you’re squeezing one into your home studio.

Personally, I love exiting a fitness studio drenched in sweat and feeling like I exerted my energy to its maximum potential — which was the norm after every VersaClimbing class I took. Still, Olshavsky says the VersaClimber can work for those at any stage of their fitness journeys — so if you don’t like to go from zero to 100 during a workout, you can tweak your exercise session to your liking.

A low-impact workout that offers health and strength benefits across pretty much all muscle groups? I’ll be hopping on a climber every chance I get.