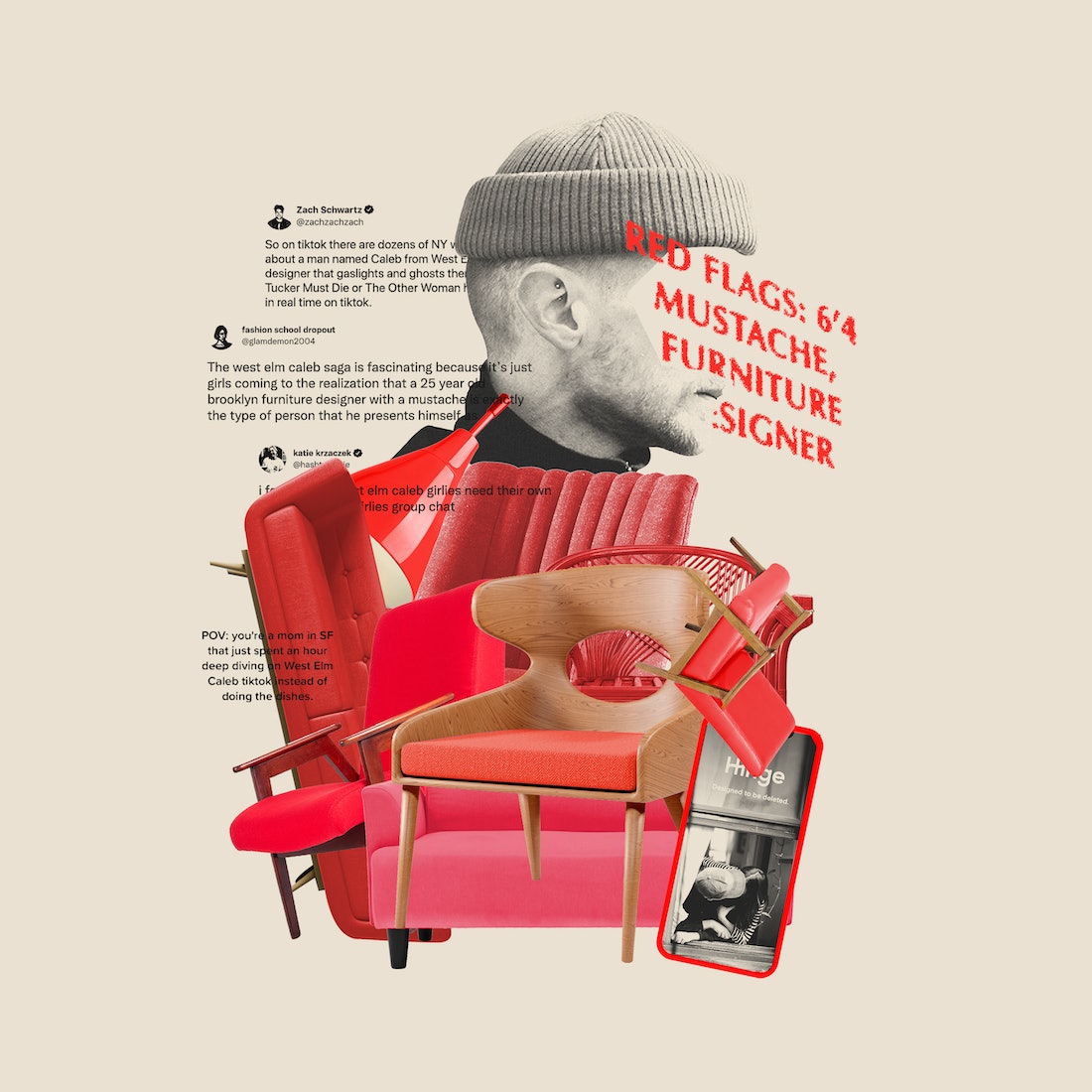 Last week, everyone who is even 5% online was introduced to social media’s newest Main Character: West Elm Caleb. The chatter around this man was pervasive enough to distract momentarily from the week’s most upsetting development: Mars making the green M&M less thotty. For those of you who are 4% online or less, or for anyone who has been avoiding this topic so far but has finally given in and clicked on this article, here’s the quick rundown.

Basically, an NYC-based TikTok user with the handle @meemshou posted a video about a guy named Caleb. She shared that she met this man on Hinge, in New York, that he was very tall, and that he ghosted her after their “amazing” first date. Apparently, this was enough information for some viewers to realize they, too, had been ghosted by Caleb, who turned out to be a six-foot-four, mustachioed furniture designer employed by a trendy home goods retailer. After that first video, roughly five (or according to tabloids, dozens of) other women came forward to share their incredibly similar experiences with the man now dubbed West Elm Caleb. (Buzzfeed did astutely point out that these women might all be contacts in Caleb’s phone, which was perhaps why they were all shown the original TikTok. )

These women then connected and compared stories regarding our mysterious furniture designer, and what they discovered was shocking to people who have never dated men in their 20s before: Caleb was doing the same exact things with multiple women. Not only was he using Hinge to meet up with dozens of women for a couple dates, just to ghost them shortly after, he was also sending them the same Spotify playlist and taking them to the same few restaurants. (This is the alleged playlist, if you’re interested. No word on which restaurants, but in my heart it’s the Bubba Gump Shrimp Co. in Times Square.)

While a lot of people over on TikTok were getting riled up, the response from Twitter and elsewhere on the internet was: …OK…? Many people questioned why Caleb’s actions were even notable. Others rightly pointed out the weird and problematic nature of publicizing someone’s private life — even if they were kind of sh*tty to you on a date — for the sake of clout and possibly money. (Please don’t forget that viral videos on TikTok earn money via the creator fund and also things like sponsorships). The man has now been doxxed (if you search #WestElmCaleb on Tik Tok, his photos show up) and forced to delete his LinkedIn, all for the crime of… dating a bunch of women at the same time, and going about that typical 25-year-old dude behavior in a moderately f*ckboy way. Some of the people who came forward hadn’t even been on dates with him; they’d just been talking on Hinge.

It takes a lot for me to come to the defense of a tall white guy who is probably making six figures assuming his job is real, but here I go. Taking people to the same date spot again and again is actually a good idea. Having a go-to is simply smart business! You know the vibe, how long it takes to get there, and, crucially, what’s on the menu that won’t cause an IBS flare-up. The setting of the date is not what creates chemistry between two people. I know the bar for men who date women, especially when they’re in their twenties, is so low that it’s basically in hell, but someone making a plan (even if it’s the same plan over and over!) for a date seems pretty nice to me. As for the playlist, well, it’s cringey to send out a playlist to anyone in my opinion. Even if you disagree with me, it’s a little unrealistic to expect someone to craft individualized playlists curated personally for someone with whom they exchanged a few messages on a dating app. I can barely make a gym playlist for myself and I know what kind of music I like.

Doing the same thing over and over again with multiple people you’re matching with isn’t some grand sign that you lack emotional maturity or that you see your dates as disposable or interchangeable. Maybe (and it’s likely) Caleb did view the women he dated or talked to on the app that way, and that’s a shame! Maybe, had he taken the time to truly get to know any of these women, he would have grown to truly care for them, rather than choosing to hop around the NYC Hinge pool like a rabbit on ketamine. But dating a bunch of people at once, even if they overlap, even doing similar things with them, is not inherently shady.

In regards to the ghosting: I’ll go on the record and say that I don’t think ghosting people after talking to them on an app for a while, or even after a few dates, is horrible enough to warrant a trial in the court of public opinion. Is it rude? Yes! However, I don’t really need to receive an uncomfortable text about why a guy who uses the same towel for three weeks doesn't want to date me. If someone stops responding to my attempts at flirting, I’m going to get the picture pretty quickly.

The only beef I really have with Caleb is about the lying. It seems like he told multiple women that he wasn’t on Hinge anymore, and suggested that they were the only one he was seeing. That’s a major yikes from me. I do think, however, that anyone who’s ready to commit 100% after one or two dates is waving a red flag in your face. That’s intense!

Look, I can’t fault any of these women for buying into the allure of a tall guy with a job who actually planned a date. I bet his abundant practice makes him a pretty good flirt, too. (Although he apparently still hasn’t grasped that no one wants an unsolicited d*ck pic.) I’m not trying to blame anyone who got hurt by this. Dating is a frustrating enough process without someone being a little snake about it.

I will, however, humbly submit that dating involves meeting a whole lot of people who aren’t going to be into you in one way or another, and the way that comes to light usually feels bad. As a friend of mine pointed out, the women Caleb dated are all incredibly conventionally attractive, and perhaps that led them to smoother dating experiences, pre-Caleb. The whole mess reeks of 2012-era Girlboss feminism, (which I regrettably participated in as a 19-year-old), where the whole, entire bit is that dating men is The Worst. While dating is fraught for pretty much everyone, I suspect that the young, hot women of New York are going to be OK. Getting ghosted by a guy after he sent you a generic playlist isn’t that bad when it comes to the spectrum of amorous nightmares. Honestly, it sounds like a relief, provided the playlist doesn’t include Panic! At the Disco’s “High Hopes.” That would be a different story.