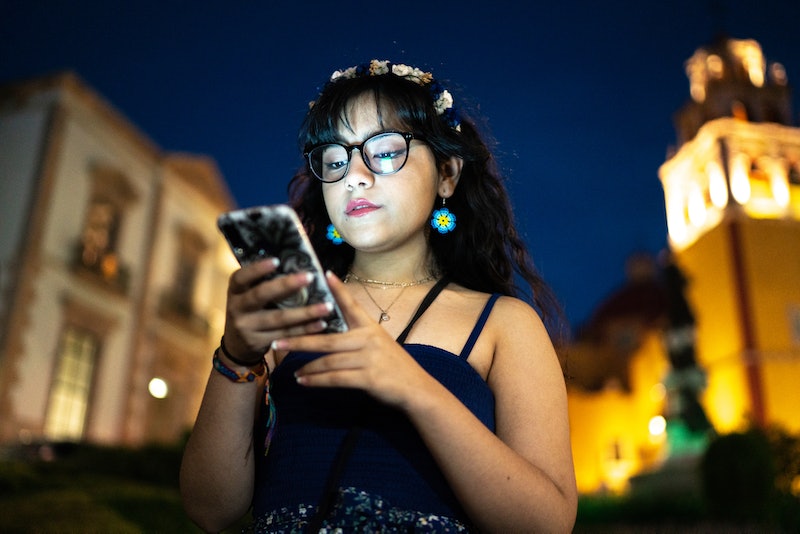 The desire to ghost someone can strike at any time. You might be three dates in and realize you don’t have anything in common. You might be three months in and realize you aren’t having fun anymore. The trouble is, breaking it off with someone — even if you never officially dated — is really tough to do. Ghosting is much easier, and way less scary, than having a frank conversation or typing out the words, “Hey, I don’t want to see you anymore.” Yet, however nerve wracking it may be, it’s definitely worth it to ghost in a nice way.

Rather than disappearing without a trace, it’s best to formally end the relationship so that the other person isn’t left wondering what happened. That is, after all, the worst part about being left on read. “Ghosting is hurtful to the individual being ghosted because they are left so powerless and with so many questions,” Rachel Thomasian, MFT, a marriage and family therapist and author of BreakUp & BreakOut, tells Bustle. “It also gets people thinking that there must be something wrong with them that they didn't deserve an explanation.”

But there’s an elegant solution that will leave your former fling with some closure, and you with your Saturday nights back. Think of it is a semi-ghost: Once you say your piece, you can feel free to fade away. Need to let someone down gently? Or call things off with a person who’s super sweet, but just not for you? Here’s how to do it in the nicest way possible.

Do It Sooner Rather Than Later

If you find yourself taking forever to text back, if you keep canceling dates, or if your enthusiasm has faded when you hang out in person, you’ve already lost interest and you’re already starting to ghost. And yes, that’s when you enter “jerk” territory.

“Any gradual withdrawal is going to replace rejection with confusion,” Dr. Darcy Sterling, a relationship therapist and creator of Jealousy Boot Camp, tells Bustle. So instead of proceeding with the agonizing slow fade — where you act distant and hope they catch a hint — do them a favor and end the relationship as soon as you know you’re done.

Choose The Best Form Of Communication

If you’ve been talking for a few weeks or months, a phone call breakup will be best. “But if you're [only] a few dates in, you could get away with a text,” Thomasian says. Even an email or DM with a quick explanation would be better than nothing at all.

So start by choosing which form of communication you feel best matches with the amount of time and energy you’ve invested into this relationship. Keep in mind the more interested the other person is, the more formal it helps to be when semi-ghosting.

The cool thing about semi-ghosting is that you aren’t actually breaking up, since you were never actually dating. That’s why all you really need to do is wish the person well. A quick message that goes something like this will work just fine: “I’ve enjoyed the time we spent together, but I don’t see a relationship in our future. Wishing you nothing but the best.”

You don’t owe them a lengthy explanation, but you can choose your words with kindness in mind. “Being rejected sucks and can make someone feel insecure,” Morgan Goulet, LMFT, a licensed marriage and family therapist, tells Bustle. “Letting someone know the things you like about their personality or the dates you went on can soften the blow.”

Maybe you don’t want to spend your life with this person. But were they funny? Charming? Surprisingly good at curating a park picnic? “Tell them,” Goulet says. “It reminds the person that they have good qualities to offer and can help them bounce back more easily.”

If you want to ghost kindly, you need to fully ghost. Don’t keep the hope alive by agreeing to meet up or “stay friends,” unless you truly want to. If you choose to set a boundary where you no longer wish to communicate, you’re entitled to that boundary, Thomasian says. Let them know, then stick to it.

You don’t have to explain to them, answer their calls — or even feel guilty for “ghosting” after you’ve let them know your détente is over. By ending the relationship, especially in a kind way, you’re putting a definitive period at the end of the sentence. And the sooner they respect that, the sooner you’ll both move on.

More like this
30 Clever Ways To Slide Into Your Crush's DMs
By Griffin Wynne, Carolyn Steber and Lexi Inks
Breeding Kinks Have Been On The Rise Since Roe V. Wade Got Overturned
By Lexi Inks
Are Quality Time & Gift-Receiving Love Languages Compatible?
By Lexi Inks
10 Creative Sexting Ideas That Don't Involve Nudes
By Lexi Inks
Get Even More From Bustle — Sign Up For The Newsletter