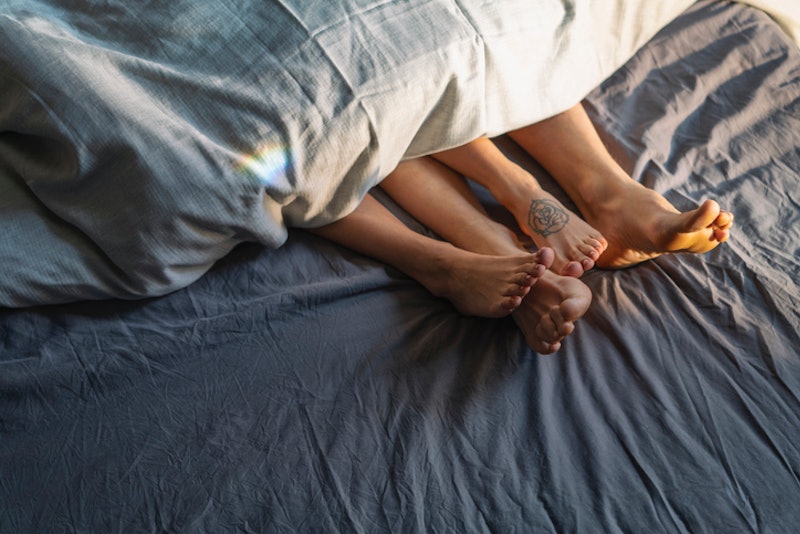 If you’ve spent any amount of time on TikTok lately, chances are you’ve heard of the Mormon mom drama. At the end of May, TikTok user @taylorfrankiepaul began posting cryptic videos regarding her pending divorce and new journey as a single mom. Paul made a name for herself on the social media platform by filming videos of her family and their ridiculously attractive squad of other young Mormon couples. While her videos about the split and the reasons behind it may have led new viewers to wonder what swingers are, those who have been following along the Mormon MomTok saga had plenty of ideas about what had just happened.

First of all, Paul’s divorce did not exactly come as a shock to her followers — especially because the social media influencer had hinted at some relationship trouble brewing before. Back in early April, she began posting TikToks confirming what some users had already suspected: She and her husband were in an open relationship. A handful of videos followed, including one where Paul explained why she and her husband slept in separate bedrooms, and some detailing the reasons for the couple’s open arrangement. But before the divorce drama even began, Paul and her gaggle of long-locked Mormon MILFs seemed to be having a blast enjoying the limelight and gossip surrounding their “swinging” lifestyle.

Paul’s candid live video, which she posted at the end of May, is what then instigated a flurry of drama on MomTok. In it, she revealed that she and her husband Tate were getting a divorce after things got messy once they were “intimate” with several other couples in their friend group — and this has now started a larger conversation about open relationships and the swinging lifestyle. If you, like many followers of Mormon MomTok, are curious to learn more about exactly what swingers are, licensed clinical social worker and kink-friendly sex therapist Sara Rosen shares insight below on the lifestyle and how to know if it might be right for you.

“Swinging,” in its most common form, is a consensual sexual arrangement in which two or more couples essentially swap partners with each other and have sex, either in couples or otherwise. Rosen shares that most couples who start swinging together begin the lifestyle after having been in their relationship for a while as a way to spice things up and introduce something new into the partnership. “As relationships grow, it’s important to continuously add novelty inside and outside of the bedroom,” she tells Bustle.

In her live video, Paul told her followers that she, her husband, and several other couples were all “intimate” with each other. While she didn’t go into extreme detail, it was implied that there were some sexual elements to these interactions — but she and another mom’s husband went further than the others involved by having fully penetrative sex. In this case, they broke a boundary agreed upon by the entire group, all of whom were close friends. As Rosen explains, swingers can take all different forms. “Some people have lifelong groups of friends that they swing with, while some people have strict rules about only swinging with couples while on vacation with the expectation that they will never see those folks again,” she says.

The key element that separates swinging from other forms of non-monogamy or relationship anarchy is that couples always “swing” together, and often with other couples. In open relationships or ethically non-monogamous styles, most often the partners involved will date or have sex separately from each other.

How Does Swinging Work?

Like other relationship styles under the non-monogamy umbrella, swinging can be done in a variety of ways. Some couples choose to do it regularly, or others might, like Rosen explains, only swing with other couples they meet on a vacation or trip. “There is a very wide spectrum of swinger dynamics that couples can engage in,” says Rosen. “Some folks start with or only engage in ‘soft swinging,’ which essentially means anything except penis-vagina penetration.” This variation allows a couple to have some aspect of their sex life that’s only for their relationship, Rosen explains.

Then there are some folks who enjoy full swaps together, but may have certain sex acts that they only engage in with each other privately, says Rosen. Because many couples often need to ease their way into the lifestyle, soft swapping is a good option to try it out with minimal damage done.

For many couples, one major incentive to swinging is the way that it increases the attraction between partners. “I like to describe it like this: Sometimes it’s fun to sleep at a fancy new hotel, but when the trip is over you’re happy to be back in your own bed,” Rosen says. “Feeling desired by others can vastly improve your self-esteem, and higher self-esteem leads to higher overall levels of happiness — which will extend to your relationship with your primary partner.”

What First-Time Swingers Need To Know

Despite what it may sound like, the swinging lifestyle isn’t necessarily easy in practice. Any form of non-monogamy definitely takes work and lots of communication. To limit hurt feelings and possible devastation to the relationship, Rosen stresses that flexibility is required. “When discussing limits and rules around swinging, the most important thing to keep in mind is that these rules will shift with new experiences,” she tells Bustle. “Maybe you thought you would like a certain dynamic, but after trying it out you realize it’s not for you.” As you test out the lifestyle, she notes it’s important to respect shifting boundaries.

It’s also important to understand that the fluidity of boundaries and needs may also translate into feelings of discomfort or jealousy from time to time. This is common and natural when it comes to living with an alternative relationship style, but taking it in stride and making your relationship stronger because of it is possible. As Rosen says, jealousy can happen at some point, but dealing with it forces couples to have very vulnerable discussions. “These communication skills often extend far beyond the bedroom,” she explains. “Couples who navigate swinging tend to find that conversations about difficult topics like money, children, etc. tend to get a little bit easier.” Of course, that requires time and patience.

What Does The Upside Down Pineapple Mean?

For many swingers, their lifestyle choice isn’t something they choose to put on public display. There still exists a certain stigma around people who choose a non-monogamous relationship style, and many couples would rather not deal with it. So then how do they get involved with other swingers or let other couples of interest know that they want to swing together? There’s actually a subtle symbolic option for that.

Pineapples have symbolically represented hospitality, friendship, and generosity for centuries. Commonly used in places like hotels, the fruit creates a warm and welcoming vibe. When a pineapple symbol is flipped upside down, it represents a different kind of “invitation.” The swinger community uses upside-down pineapples to indicate that they’re open to “sharing,” aka swinging with their partner.

Where To Find Other Swingers

As with other non-monogamous lifestyles, it can be difficult to find ways to get more involved in the swinging realm once you’ve decided to pursue it. After all, it’s not exactly easy to approach another couple and ask them if they want to jump in bed with you and your partner. To meet others who are also interested in swinging, or to learn more if you and your partner are ready to dip your toes in, Rosen suggests turning to the internet. “There are some really great apps for finding like-minded couples. Feeld is one of my favorites,” she shares. Lifestyle groups on Reddit are another option.

Above all, remember that everyone in the lifestyle was once “new” to it, just as you and your partner might be. Checking out some resources (Rosen recommends books like The Ethical Slut or podcasts like Swing Nation) to start your own research and get familiar with the ins and outs can help you and your partner decide exactly what you want your swinging lifestyle to look like. Take it slow, communicate plenty, and remember that you’re always in it together.