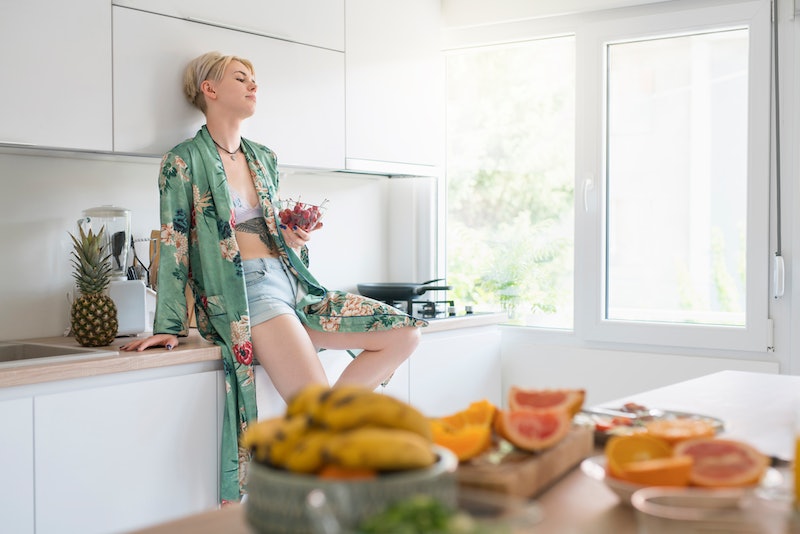 Go vegan, they said. You’ll feel good, they said. But you made the TikTok-famous fried seitan “chicken,” and now you’re wiped out for the afternoon. If plant-based meals are supposed to give you more energy, then why does eating vegan make you so tired?

“It is generally normal to feel a little tired after eating your biggest meal at the end of the day, but we should be feeling energized overall after each of our meals,” says Alyssa Pike, a registered dietitian and manager of nutrition communications at the International Food Information Council (IFIC). If you’re sleepy after going vegan — or even just having a single vegan meal — you’ll probably want to make sure that chickpea omelet is giving you all the nutrients you need.

Why Are You Tired After Eating Vegan?

It’s a myth that you can’t get enough protein as a vegan, according to the National Academy of Sports Medicine. But a lack of protein is linked to fatigue, says Pike, and if you’re not paying enough attention to how you’re getting your nutrients when you’re eating vegan, you might need to up your intake. According to a 2016 review published in the journal Advances in Nutrition, people who consume less protein often have more restless sleep, and are therefore more likely to be tired, than people who get enough protein.

You might also not be eating enough food in general. “We need a baseline amount of energy just to exist,” Pike explains, but that doesn’t necessarily translate into a specific amount of food. It’s possible that there might just not be enough calories on your plate, and without those little nuggets of energy from your vegan meal, your body might need a TikTok break to compensate.

People often go vegan because they want to get more nutrition from leafy greens or beans, but you may also feel the need to pass out after a vegan meal because you’re not getting enough micronutrients — AKA vitamins and minerals. There are a few micronutrients that vegans may be less likely to get in their meals, Pike says. Omega-3 fatty acids, iron, calcium, and B12 tend to top that list. When you don’t get enough of these micronutrients, Pike explains, your body has a harder time functioning at peak efficiency, which makes you want to curl up and nap.

How Can I Be Less Tired After Eating Vegan?

Pike says that to avoid sleepiness after vegan meals, you’ll want to make sure you’re ticking a few foodie boxes: protein, enough food, and the amount of micronutrients you need. For a solid amount of vegan protein, think tofu, beans, tempeh, lentils, oats, quinoa, green peas, seeds, and nuts. Integrating those foods into your plant-based meal prep will help you get enough food to keep your body energized enough to stay awake post-brunch.

When you need to get in your vitamins and minerals, you don’t have to rely only on the vitamin and supplement aisle. You can get your vegan omega-3 fatty acids from chia seeds, flax seeds, and walnuts. When you need vegan sources of iron, turn to cooked spinach, avocado, tofu, and lentils. You can find vegan calcium in cooked broccoli, almonds, cooked collared greens, tempeh, and your fave calcium-fortified cereal. Need vegan B12? Get on the TikTok train and pour nutritional yeast on literally everything. It’ll taste cheese-y enough and keep you awake through the 3 p.m. slump.