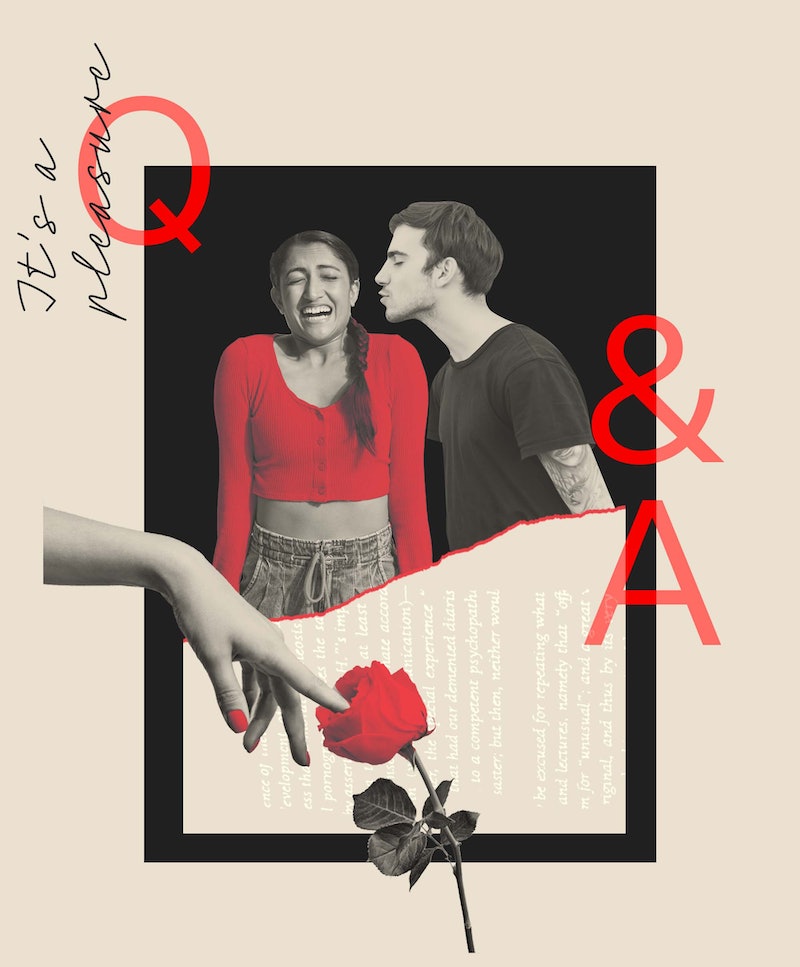 We Are, stock-eye/Getty Images
It's A Pleasure

Q: I waited until I was 18 to have my first kiss, and I think I always thought that it would be amazing and fireworks would go off in my head, and I worked myself up so much that I was really disappointed when that didn’t happen. Since then, I’ve had a few good kisses with different people (mostly when drunk, if I’m being honest), but I’ve never really felt anything or enjoyed it with my boyfriend.

I’m not really sure why, I guess it just feels like something I’m supposed to do, but I don’t want to do it and I don’t get anything out of it. I don’t know if there’s anything I’m doing wrong or something I should be doing differently. It just doesn’t give me any pleasure.

A: Man, oh man, you have come to the right place. I am, unfortunately for my mentions in 2018, the author of a piece titled “Kissing! Is! Overrated!” if that gives you a hint of my own stance on the matter. A lot of people were riled up by that take because they loooove smooching, but I frankly stand by my opinion. Kissing, to me, is pretty meh. Over half of cultures do not kiss romantically, so you and I are very much not alone in our feelings. Making out looks nice on film, sure, and I cannot argue that the Jess and Nick kiss of 2013 (New Girl Season 2, Episode 15 for the horny-curious) was hot, hot, hot. But really, when it comes down to the actual act of touching tongues, I find the whole thing very underwhelming.

To be clear, I’ve experienced both good and bad kisses (a brag). And I have liked — loved, even! — many of the kisses I’ve gotten (double brag), but I if someone told me right now that I could never kiss again, I’d probably be fine. I’m not Modest Proposal-ing that everyone else ought to stop kissing; I’m just sharing so you know that you aren’t some giant weirdo. It is perfectly OK not to enjoy certain physical acts. Some people aren’t huggers. Some people find cuddling off-putting. Some people don’t ever want to give or receive oral sex. There are all kinds of things that we do and don’t want to do with our bodies.

You aren’t going be turned on by everything. This is especially true, I’ve found, as time goes on with a partner. In the beginning, we’re so horned up for our crush that any physical contact — even something as PG as sitting side by side on a couch — feels as thrilling as falling from the top of the Tower of Terror. And then a few months or a year goes by, and eventually, if it’s not The Thing That Drives You Wild; it’s often forgotten. Which, if not ideal, is understandable. Once you’ve witnessed someone clip their toenails, it’s kind of hard for everything they do to be a turn-on. If there are things you and your partner are doing that are hot to you, do those! Do those lots! If you love road head and back massages, express that to your partner.

Now, if nothing or very few things that your partner does physically feel good to you, that is a separate problem with separate solutions. That might mean you aren’t attracted to your partner, or that you could benefit from working on your relationship with sex with a therapist, or perhaps that your sexual identity or orientation is different than you’ve assumed.

Otherwise, you have no need to worry about not liking one physical act as much as you hoped. Is it a bummer? Yes! I wish kissing inspired more of an AWOOOGA moment for me. I will also admit that my relationship to kissing has changed, and probably will again. Right now, I find it somewhat hotter than I did three years ago when I wrote my diatribe against the romanticization of mouth to mouth, but it’s still not the apogee of sexiness to me. Maybe at some point kissing will feel more exciting to you. Maybe if you don’t pressure yourself to feel excited by it, more enjoyment will follow. Maybe it won’t! That’s OK, too!

For now, do what turns you on. If you don’t like kissing, don’t initiate it. If you don’t mind kissing, let it happen when it happens. I wouldn’t recommend telling your partner that you don’t like kissing them, but if you want to share that Frenching doesn’t do much for you, that might be helpful information for them to have. Suggest things you do like, things that do turn you on — they don’t have to be physical, either. Share those readily and enthusiastically. Leave kissing for all the hotties out there who love tongue-on-tongue stuff — more for them!

More like this
My Partner Wants Me To Wear A Diaper During Sex. Help!
By Sophia Benoit
18 Hinge Prompt Answers To Try If You’re Looking For Something Casual
By Lexi Inks
TikTok's "Triangle Method" Technique Is The Key To Better Flirting
By Carolyn Steber
5 Signs You Have A Toxic Relationship With Yourself
By Lexi Inks
Get Even More From Bustle — Sign Up For The Newsletter
From hair trends to relationship advice, our daily newsletter has everything you need to sound like a person who’s on TikTok, even if you aren’t.