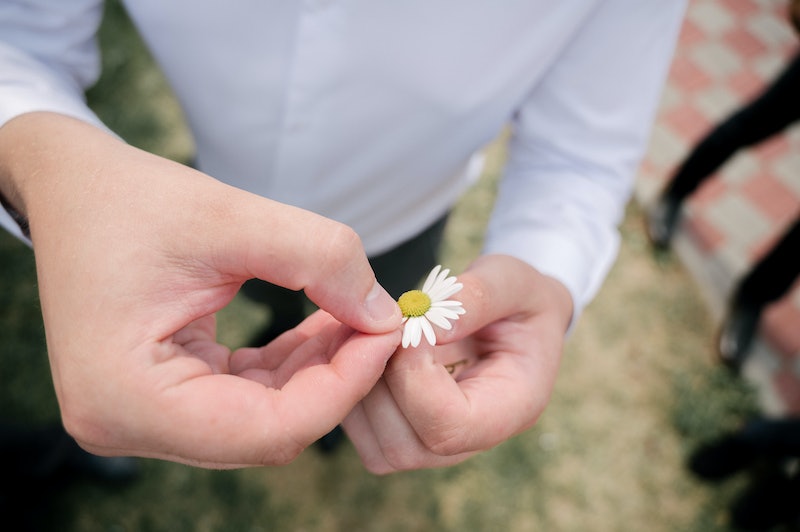 You know the feeling all too well: the rush of excitement, the fluttering in your stomach, the daydreams that just won't quit. When you have a crush on someone, it's often all you can think about. But what, exactly, is going on in your brain?

When you break it down to neurotransmitters and hormones, it certainly takes some of the romance out of it. But that's precisely where it all begins. "During a crush, your brain involuntarily releases dopamine, a feel-good hormone," Natalie Mica, LPC, a licensed professional counselor in private practice, tells Bustle.

Thanks to dopamine, when you see your crush you'll feel excited and giddy, Mica says. But even if you just think about them, your brain will react the same way. "Of course your brain is wired to want this euphoria, so you think of them often and you want to be around them more," she says. That's why it's so fun to have a crush, and it's also why it can almost seem addictive.

Neurotransmitters bond to pleasure receptors in the brain to create feelings of euphoria and elation, Dr. Fran Walfish, a family and relationship psychotherapist, tells Bustle. Oxytocin, or the "love hormone," is also released, Walfish says, which activates the warm and cozy feeling associated with love.

It can be so powerful that in 2005 a research team led by biological anthropologist Dr. Helen Fisher was actually able to see the side effects of love on fMRI brain scans. According to an article by Harvard Medical School, they looked at 2,500 scans from college students who were shown a photo of a love interest, as well as a photo of an acquaintance. When looking at the former, the two regions of the brain activated were the caudate nucleus, the reward center of the brain, and the ventral tegmental area, which is associated with pleasure and focus.

Developing a crush on someone often happens with people you're still getting to know — and don't yet love — but that's part of what makes it so intoxicating. "Our brain has a stimulus (the person) that is different from our daily experience — and that novelty keeps us engaged," Dr. Josh Klapow, PhD, a clinical psychologist, tells Bustle.

This novelty, and mystery, is what often contributes to the idea that your crush is "perfect." As Candida Wiltshire, MSW, LCSW, LISW-CP, a licensed clinical social worker, tells Bustle, the brain will begin to associate the thoughts of your crush with pleasure, due to the release of dopamine. And that can result in a desire to continue or increase your interactions and positive thoughts about them.

This is one reason why it's so easy to overlook early red flags, like the fact you might not be truly compatible. "Many times individuals experiencing a crush are living in the future and 'jumping to conclusions' on how perfect things will be," Wiltshire says. "This often results in thoughts based on an unrealistic version of their crush, and the relationship with that individual."

Because a crush quite literally feels good, it's tempting to look the other way and continue idealizing them. It's much more fun to feel those butterflies in your stomach, which are likely caused by a rush of adrenaline in the brain, Walfish says. When thinking about your crush, blood is ushered away from your abdomen and into your extremities, just like it does during a fight-or-flight response. This is most often associated with fear, but positive emotions can cause it, too.

"Anxiety causes adrenaline to surge, so you may be 'excited,'" Klapow says. "That excitement can be anxiety or enthusiastic excitement and you still can feel butterflies." Actual anxiety may even kick in, as you wonder whether your love will be reciprocated, further impacting how you feel.

A crush can be fleeting, but it can also develop into a deeper version of love as a relationship progresses. "The bottom line is that people who are in love with one another typically retain some degree of the crush throughout their relationship," Klapow says, "while individuals with crushes only will find those feelings fade." So if it's just a crush, you may soon find yourself moving on to someone new and starting the process all over again.

More like this
Are Sagittarius & Sagittarius A Good Match? Astrologers Weigh In
By Kristine Fellizar
This Company Will Send STI Tests Right To Your Door
By Lexi Inks
15 Ways To Deal With A Toxic Family During The Holidays
By Gabrielle Moss and Carolyn Steber
Try These 3 Manifestation Rituals To Feel Healthier Than Ever
By Brittany Beringer
Get Even More From Bustle — Sign Up For The Newsletter