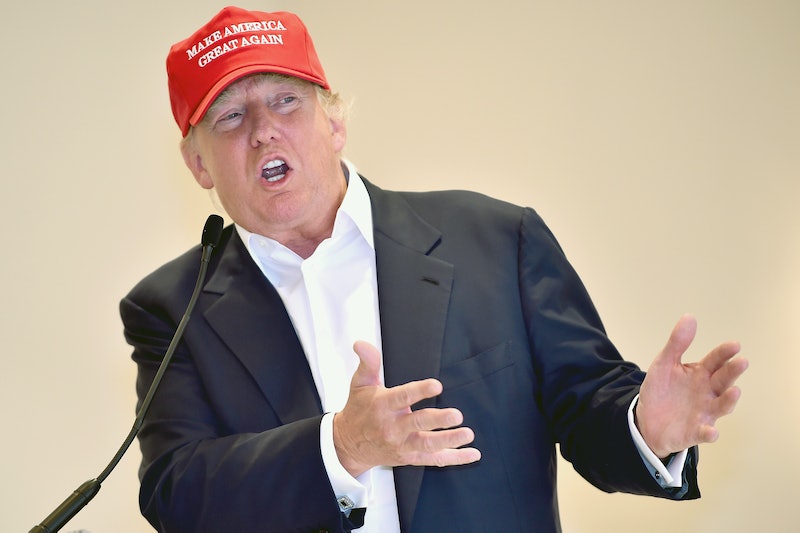 Are you planning on watching the 2015 GOP debate on Thursday night? Then you obviously need a drinking game to play. Can't tear yourself away from Donald Trump's personal parade of crazy? Does listening to Republicans talk around their homophobia (lookin' at you, Ben Carson and Ted Cruz) sound like your idea of a good time? Do you enjoy watching Chris Christie's extended audition for Saturday Night Live — aka his presidential campaign — unfold in real time? Then you're definitely in for a treat on debate night. And if you like politics and love alcohol, you're in for even more of a treat, because we have the exact drinking game you need in order to make it through the night right here. Welcome to the 2016 election, everyone!

But first, a word of warning: Thursday night's debate promises to be a doozy for several reasons. First, the Republican party currently has almost as many presidential candidates as we have Spider-Man reboots. Second, self-professed human-shaped volcano of "controlled anger" Chris Christie will be in the same room as the reigning king of speaking before you think, Mike Huckabee. And third, Donald. Trump. Need I say more?

Now, I'm not saying that I expect a knock-down, drag-out fight to break out onstage, possibly with Megyn Kelly narrating the action. But I am saying it wouldn't be surprising if it did. Anything can happen in politics.

Prepare your shot glasses and gird your livers, folks, because this is going to be a bumpy ride.

There you have it, folks! Have fun, drink lots of water, and remember ...