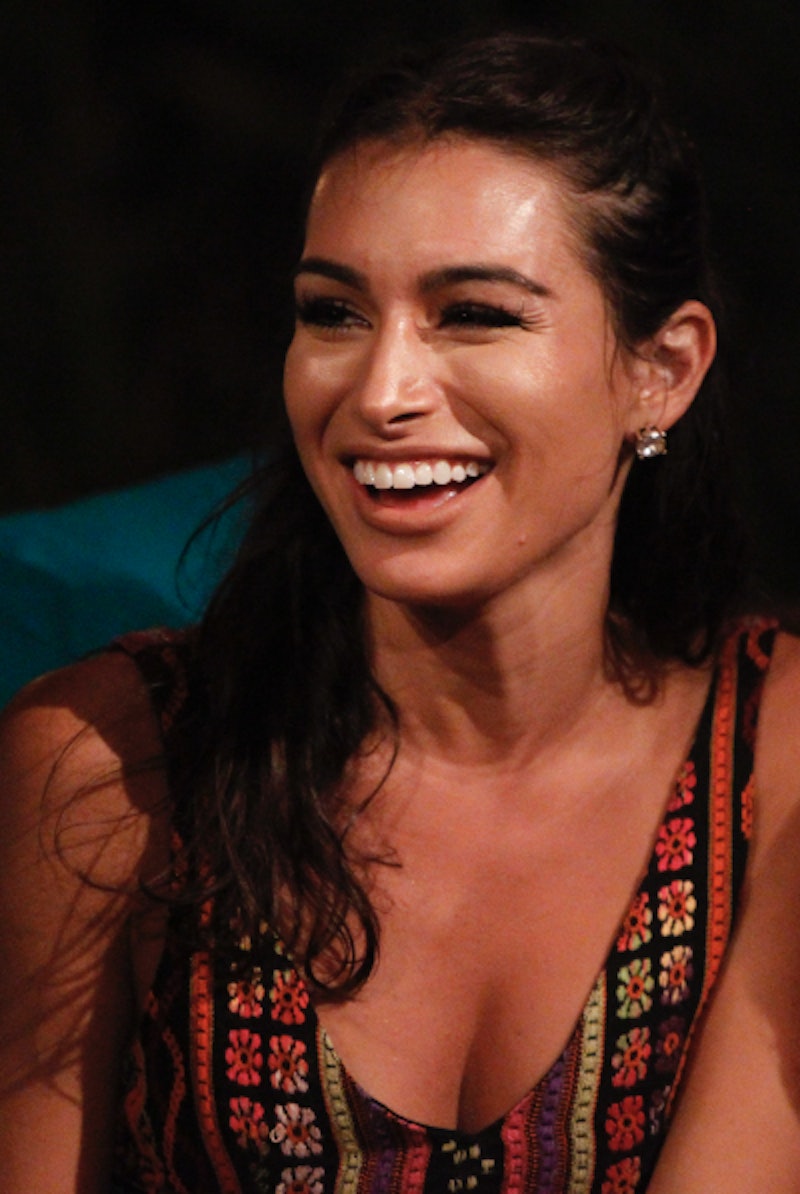 If you were more than a little bit alarmed at the Bachelor in Paradise Season 2 sex and pregnancy promo that dropped at the end of the premiere, you are not alone. It had all of the usual components of a Bachelor trailer: People crying, people hooking up, beautiful vistas, people crying some more, fights, drama — the whole package. But, there was one line that caught everyone's attention: "Wait a minute, you're not a virgin and you could be pregnant?" Bachelor fans know there aren't a lot of self-proclaimed virgins on the show, so the tease had everyone thinking Ashley I. lost her virginity on Bachelor In Paradise .

The full promo shows Ashley I. go up to Chris Harrison to ask for a date that ends in a Fantasy Suite. Then it super cut immediately to Ashley I. while a mystery voiceover has someone asking, "Wait a minute, you're not a virgin and you could be pregnant?" There's so much to unpack here. So, before you start assuming Ashley had sex and is pregnant, let's talk about things.

First, if the promo is true it means that Ashley I. and Jared (or, maybe a new guy who comes into play) made it to the Fantasy Suite. If so, go Ashely! Get down with your bad self. But, more than likely, Ashley I. is not pregnant. Yes, it would make for amazing TV, but they are only in the house for a few weeks — total! We are already a week in, so even if she did get knocked up on the show, the chances are very slim it would all shake out during the show. And, ABC has not responded to Bustle’s request for comment the validity of the promo.

But, science isn't the only thing that supports this theory. There are many reasons you cannot trust the Bachelor in Paradise promo videos.

1. They've Done This Before

The Bachelor has already teased a pregnancy test that came to nothing. At this point they may just be messing with us. Remember, just because something is teased in the promo does not mean it will happen on the show.

2. It Makes For (Suspect) Maximum Drama

Producers are just looking for whatever will cause the most drama on the show. A girl losing her V-card and getting knocked up all in the same Fantasy Suite? That is primo-drama right there, which makes it all the more unlikely.

3. The Lines Can Be Scripted

I know we like our reality shows to be full of, well, real life. But, producers do have a hand in things. One of the girls easily could have been fed this line, just for the promo.

Sarcasm and joking is also hard to discern in these previews. Ashley I. could have had a horribly bad date, and they could have all been kidding around about it!

5. The Show Needed Some Scandal

It could be we are in for a peaceful season where everyone couples up and stays that way. (I said could be, not likely.) Its possible The Powers That Be needed a scandalous event to build the season around so they staged a pregnancy scandal.

6. It's The Power Of Editing

This is the most important reason to stay skeptical, friends. These promos are edited within an inch of their life, these people could all be saying these lines to other people, or meaning something completely different. The only way to know for sure is to watch. Well played, Bachelor In Paradise. Well played.

More like this
Christine Quinn’s 'Selling Sunset' Future Is *Finally* Confirmed
By Bustle Staff
Here’s Why 'Pretty Little Liars: Original Sin' Season 2 “Won’t Be The Same”
By Kadin Burnett
Everything To Know About 'Sweet Life: Los Angeles' Season 3
By Kadin Burnett
Everything Jarrette & Iyanna Have Been Up To Since 'Love Is Blind'
By Brad Witter
Get Even More From Bustle — Sign Up For The Newsletter