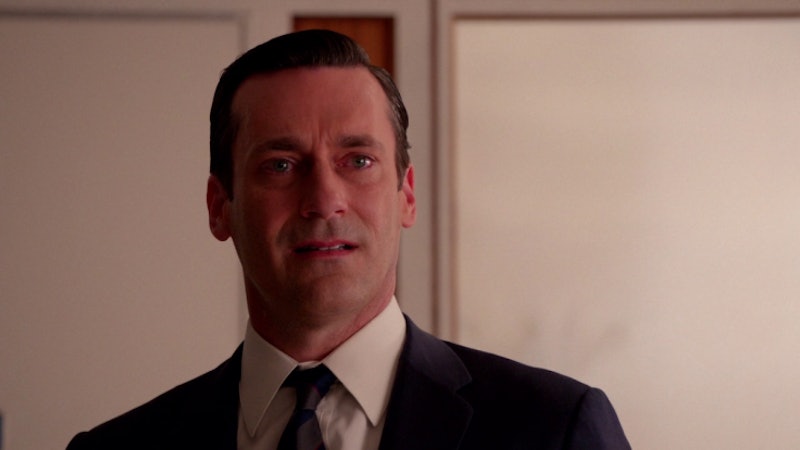 When the worst happens — when your favorite television show gets cancelled — grief is bound to ensue. My first brush with an unexpected cancellation came in the late '90s, when my mother jarred me with the announcement that Freaks and Geeks was being taken off the air after only one season — only one season! Feeling that there were so many more story arcs to explore, so many more faces for Jason Segel to make, and so many more high school tropes to showcase, I proverbially somersaulted headfirst into grief.

"Can't they move the show to a different network or something?" I asked my mother.

Her response was a macabre shake of the head. Since overcoming that loss — and garnering a box-set of the entire series — I've had to deal with other beautiful works of escapism coming and going, too. I know I wasn't alone, though — where were you during the Friends series finale? How many slices of pizza did you have to console yourself with when it was announced that Mad Men was dunzo? If your answer to the last question was "I lost count," then you and I officially have something in common.

Despite the prevalence of box-sets and Netflix binging, saying goodbye to a beloved series is never easy. There is an invariable ache for just one more season, one last cliffhanger, and the like.

As one who has been through her fair share of sadness over cancelled programming, I have decided to make it my duty to help us all through the stages of grief that accompany said cancellations. If you're going to be mourning, it's best to be equipped with a good playlist. Thus, I have selected songs to play for each stage of grief you experience when your favorite show gets cancelled.

There is no tool kit available (yet!) to prepare us for the jarring news of our favorite show being cancelled. The urge to cling to what was once a weekly staple is completely normal. Engage in a reverie by listening to this mournful track from Landon Pigg.

2. Isolation: Céline Dion, "All By Myself"

During the grieving process, you may find yourself relegating all activity to the confines of your bedroom; solitary Netflix binges and scouring YouTube for old interviews with cast members is likely to ensue. Listen to "All By Myself" to properly mourn your loss in private, but remember to brace the outside world before too much time goes by.

How could [insert whichever network decided to pull the plug on your favorite show here] take this beacon of entertainment fodder away from you?! GAH! Vent your frustrations in a productive — albeit, private — way by jamming out to this vitriolic hit from the boys in Maroon 5.

Before saying goodbye to a prized treasure, it's natural to attempt bargaining as a way to avoid letting go. Can't there be just one more season? Can the show of your dreams find a home on a different network? No, it probably can't, but feel free to let your wheels turn over such questions while tearfully playing Adele on a continuous loop.

5. Depression: Michelle Branch, "Goodbye To You"

At this point, you're almost ready to say goodbye — but not before a good cry accompanied by snacks and libations. Let your grief flag fly by belting out this track as a way to bid your beloved show adieu.

6. Acceptance: Sarah McLachlan, "I Will Remember You"

At this stage, you're sad but ready to move forward. Cue up "I Will Remember You" by Sarah McLachlan and take a trek down a road marked "nostalgia" as you cherish the many wonderful memories your cancelled show gave you.

Stay strong, television fans! For every cancelled show, there is a new hit right around the corner.