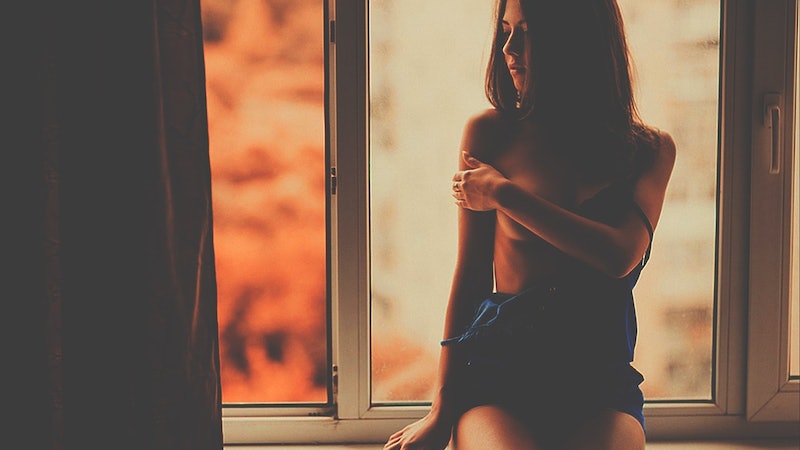 Unlike in the movies, sex can’t always be smooth sailing. In fact, sex is weird. There are strange smells and noises, and random situations that can lead to a whole boatload of awkwardness. And it’s all that awkwardness that you don’t even realize exists until you’re face to face with it. It would be nice if movies and TV gave us a heads up about queefing, you know?

While sex can be a bit problematic for both men and women, it’s women who deal with the really awkward stuff. For starters, we bleed and sometimes our period shows up unexpectedly, and once you take into consideration certain positions, our boobs can be erratically flopping all around, a penis might be jabbing into our bladder, and, “I swear I didn’t just fart. I don’t know what that was!” See? Totally not smooth sailing.

But for every piece of awkwardness you encounter when it comes to sex, you’re certainly not the first (or the last) to have to deal with it. Sexy is a mess and sometimes even gross thing that we all thoroughly enjoy. It’s totally human to have weird and awkward, even blush-worthy moments during sex, so you really shouldn’t sweat it.

So you don’t feel like an outcast the next time things go awry in bed, here are 12 awkward things all women deal with during sex. You’re not alone.

Although leg cramps during sex are completely common, they can be awkward as hell. You can go from having great sex, to screaming wildly as you jump out of bed and try to shake your muscle back into place. Talk about mood killer. But while leg cramps aren’t entirely avoidable, upping your potassium intake in your diet and stretching before sex, can help.

3. Weird Smells That You Can’t Define

With bodily fluids being passed, sweating being out of control (especially in the summer months), and “OMG. I think someone just farted,” sex can be a bit stinky. When that stench reaches your nose, it’s hard to keep a straight face, especially if you think you’re the fart culprit.

4. Realizing You Need To Pee

5. You Period Decides To Join The Party

Gah! Why is that even if you’re on the Pill, your period just decides to mess things up and show up when you’re not ready?! While some partners don’t have a problem with period sex, others can’t handle it and that's when things can get weird.

6. Your Partner’s Inability To Find The Right Hole

As much as one would like to hope that at certain age everyone should be able to easily find the vagina, sometimes it can take a second, especially if your partner is focused on more than one thing. There’s also the risk of, if things are really slippery down there, something in your butt. Of course, it doesn’t get very far, but it can get far enough that both you and your partner stop what you’re doing while they spend the next 20 minutes apologizing and you kindly explain you’re just not ready to tackle that orifice yet.

7. Your Hair Being Pulled (And Not In A Good Way)

If you’re into rough sex, then hair pulling is great! But if you’re not, it’s just straight up uncomfortable, and the longer it is, the more likely it is to get pulled or stuck in places if you don’t have a hair elastic.

As a woman with rather large boobs, the rate at which my boobs flop around during sex can sometimes be alarming. Whether I’m on top, the bottom, or doggy style, where my boobs really get swinging in the wind, it can be awkward for me. Not only am I’m self conscious of my boobs as they bounce all about without a care in the world, but more importantly, it hurts like hell! My girls are heavy.

While a condom that goes MIA during sex is awkward for both men and women, it’s really awkward for women, because she’s the one who has to go fishing up inside her vagina for it. If she can’t find it, she’ll have to ask for her partner’s help, and if they can’t find it either, then she’ll need to go to the ER to have it removed.

However, lost condoms are very common and really retrievable, if you don’t freak out and just bear down a bit. You can use your muscles to push it out while you reach inside.

When I was dating, my dog couldn’t handle it. Between hurling himself against the bedroom door every time I was having sex with a guy to literally chasing men out of my apartment because of his jealousy, Hubbell was not a fan of me having anyone in my life besides him. The few times he did get into the bedroom while I was having sex, he either stared like a creep or leapt onto the bed, thinking he was saving me from being mauled. Such a knight in furry spots.

Queefing may be totally normal and unavoidable, but it doesn’t change the fact that they’re awkward. Even though it's just air bubbles from penetrative sex, you immediately start apologizing and swearing up and down it’s not a fart, as your face turns bright red. Yikes.

12. When You Realize You're Not Going To Orgasm

The fact that you're not going to orgasm shouldn't be a big deal, but depending on the sensitivity of your partner, admitting that it's just not going to happen can be hard. It's in those moments that you have to figure out if it's better to be honest or go with a white lie. (Hint: Be honest. You might as well feel awkward together.)