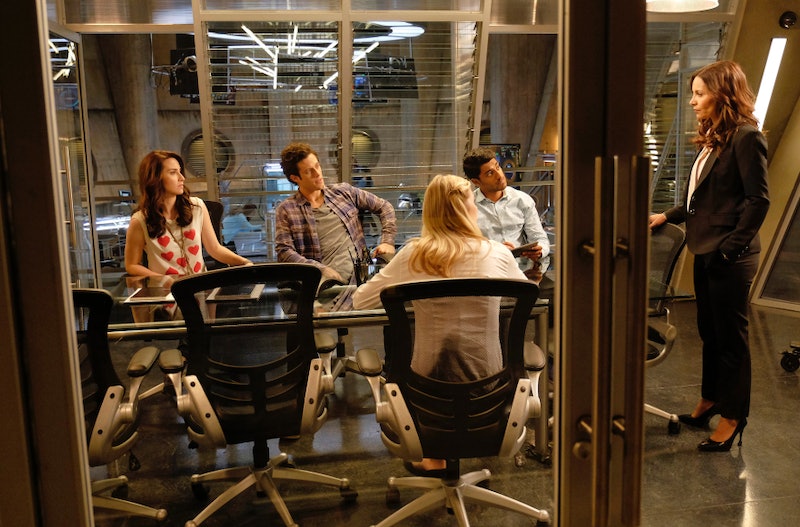 Stitchers fans don't have to worry about their show like some others do: ABC Family has already renewed Stitchers for a second season. Unlike the characters, fans don't have to try and stitch themselves into the minds of the writers to figure out what's going to happen on the series; all they have to do is wait. But, as we all know, waiting can be so hard. What's a fan to do in the meantime? There's always the all important season re-watch, but when is that going to happen? When will Stitchers come to Netflix? Will it come at all?

Netflix hasn't made an official announcement yet. But, don't let that get you down: Like the Stitchers team, we can piece together some clues to figure out when it might be available on streaming. The good news is that ABC Family shows do end up on Netflix at some point. Pretty Little Liars is available for streaming, so is Switched at Birth, and so on. The only question is: When?

If Stitchers follows the same model, that means Season 2 — and the first-season Netflix arrival — will both come around the same time: Early June 2016. That's a helluva wait!

So, what can you do in the meantime? First off: Are you really that wedded to Netflix? I know that Netflix makes it so easy to marathon, but there are other ways to get your Stitchers fix in the meantime. For example, right now, all 10 episodes are available to stream on the ABC family website. Unlike Netflix, you have to watch ads, which is kind of a bummer (but you probably had to do that when you saw the episodes airing live in the first place).

Other than that, my Bustle colleague Leah Thomas put together an excellent list of six shows/movies to watch while you wait for Stitchers Season 2, many of which can be found on Netflix. My personal favorite on her list is Pushing Daisies, which shares with Stitchers the premise of asking the dead for information that'll help solve their own murders. But, there's also a colorful pie shop, a romance with a re-animated corpse (not as gross as it sounds), and Lee Pace playing Ned the Piemaker, a lovelorn baker. I know I've swooned about Pushing Daisies all over Bustle — and I'll always take every opportunity to do so — but look at this face and tell me if you can blame me.

Believe me, that is not hard to look at as you wait for Stitchers to come to Netflix.