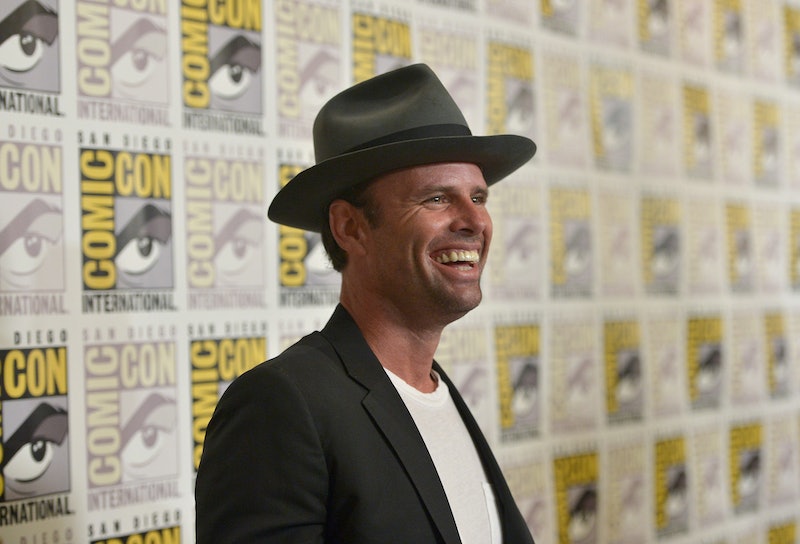 Is it too on-the-nose to actually name a character in a comedy "Laughter"? American Ultra screenwriter Mike Landis certainly doesn't care. And with the seasoned and acclaimed actor who plays Laughter in American Ultra being Walton Goggins, who possibly minds? Kristen Stewart and Jesse Eisenberg are the heroes of the stoner action-comedy; Laughter is the cheerful designation for Goggins's bad guy. And if his face isn't familiar to you, then you don't watch enough movies or TV. (Good stuff, at least.) Time to meet Walton Goggins.

Goggins has become an incredibly in-demand character actor. He has a distinctive voice and look, but there's still something adaptable and chameleon-like about him. And I expect to see his traditionally high standards of work in American Ultra. The movie is being marketed as a wild ride with a biting sense of humor and an unexpectedly sweet relationship as a base. But Goggins didn't approach it like a break from his more dramatic fare. He told Coming Soon why he was drawn to the part: "It was very, very surprising to me when I saw it on the page and I thought, ‘You know what, yeah, that’s something I can really sink my teeth into, and I think I can fit into this profile in a nice way and do something with it.’”

Check out six other magnificent Walton Goggins performances. I can assure you that he sunk his teeth firmly into all of them.

Goggins shares a penchant for unique-sounding names with his character on the FX western Justified, but hopefully not much else. Boyd Crowder is the series' most compelling character: a criminal who found Jesus and then re-found crime. His motivations are hardly ever clear, and Goggins is magnetic in the part.

The actor recurred for Seasons 5 and 6 of another FX staple, the motorcycle drama Sons Of Anarchy. This time, Goggins rocked a smokey eye as Venus Van Dam, a transgender escort who eventually becomes involved with a member of the gang.

Goggins tackled a particularly brutal role in the Quentin Tarantino slavery revenge fantasy, Django Unchained. As Billy Crash, the actor is one of the most loathsome characters in the film. Who could forget that endless torture scene?

The ultra-meta comedy has always loved casting guest actors against type. Walton Goggins only showed up in one episode of Community, but it was an important one. He played the all-business executor of the lately departed Pierce Hawthorne's will, and had the bittersweet task of delivering Pierce's final words to each of his friends. Not a dry eye in the study room.

As Democrat Congressman Clay Hawkins, the actor more than kept up with the ludicrous amount of acting talent bursting out of the film. Daniel Day-Lewis may be the main Lincoln event, but don't sleep on his equally impressive co-stars.

The Shield marked a turning point in the actor's career. His resume was already fairly lengthy at that point, but his work as Detective Shane Vendrell won Goggins a good deal of fans and critical attention. The show itself helped set a new standard for network television drama (that is, to keep up with premium channel quality), and Goggins's work was no small part of that impact.

After you check out American Ultra, you can look forward to more Walton Goggins, including a role in Tarantino's next film, The Hateful Eight!