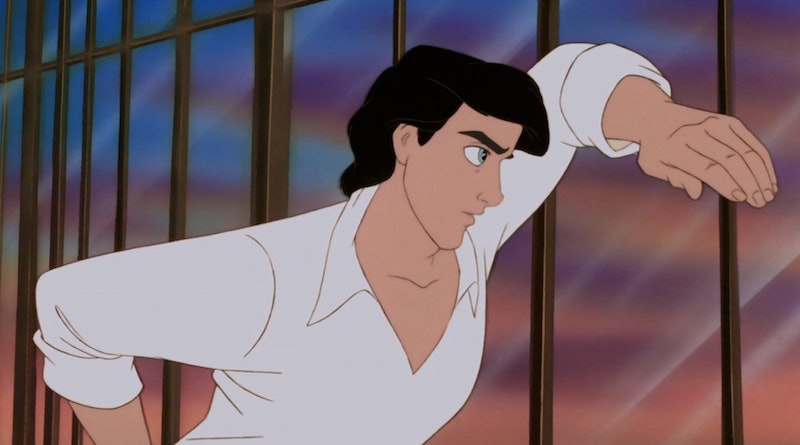 As an avid fan of The Little Mermaid since childhood, it pains me to say that Prince Eric is actually the worst. Fans remember Ariel's dashing suitor as a handsome prince who invited the lovelorn mermaid-turned-human to live with him in his opulent castle after finding her stranded and mute on the beach. During my first viewing of this iconic film (I was six years old), Eric seemed like the ultimate dreamboat. But you get decidedly more shrewd — albeit jaded — as you age, and upon further inspection, I have found a few distasteful components to Eric's character.

For instance, he didn't seem all that concerned about the well-being of a woman who had no voice and was using a tattered sail as a wrap dress. Why wasn't he trying to locate her family — or at least some medical attention? In a nutshell, his reaction was pretty much, "Oh, this is weird. Well, this chick is hot, so I guess I'll let her crash at my casa for a bit." From there, he seems to get a bit smitten with Ariel, but then basically ditches her once an incognito Ursula shows up with a killer set of pipes — LAME.

Because things of this nature are best broken down in a listicle format, let's take a GIF-laden look at why — as far as Disney princes go — Eric is the absolute worst.

1. His Priorities Are All Out Of Whack

Remember that part in the movie where Eric, um, almost died in a shipwreck? After Ariel returns him to safety onshore, he awakens in a hazy state while she sings to him. His first priority when reaching a full level of consciousness: Find out who the hot singing chick is (even though most people would assume the whole thing was a hallucination). Is he concerned about the safety of his fellow shipmates? Nope! He just really wants to find that babe from the beach. I can't.

2. He Had No Concern Over Where Ariel Came From

Why was this guy not concerned about Ariel's lack of voice, shelter, or ability to obtain clothing from somewhere other than a wrecked ship? He's clearly too busy trying to get his swerve on with the chick who had the killer pipes to care about anything else. Ugh.

3. He Never Acknowledged How Disconcerting THIS Was

Again, why were questions not raised about certain things in regard to Ariel? Eric was pretty much like, "Yeah, I could call a doctor or something, but I'd rather just stare at this girl's face." Ew.

4. He Ditched Ariel For Ursula

Apparently, Eric looks for two things — and only two things — in a mate: hotness and a sweet singing voice. The minute Ursula showed up with Ariel's voice in tow, Eric was like "BYE" to our favorite flame-haired Disney princess, and then was about to marry Ursula. WTF?

5. Once Ariel Got Her Voice Back, Eric Was Like "Let's Get Married"

Once Ariel can sing again, Eric is all, "Oh, OK. I guess I'll put a ring on it." Did this guy ever consider maybe going on an actual date with this woman before up and marrying her? Did he ever think that maybe a discussion about the fact that his new bae had been living under the sea as a half-fish for the majority of her life would be prudent? I. Can't. Even.

Sorry, Eric. I still love The Little Mermaid, but there's no denying that this prince was anything but charming.