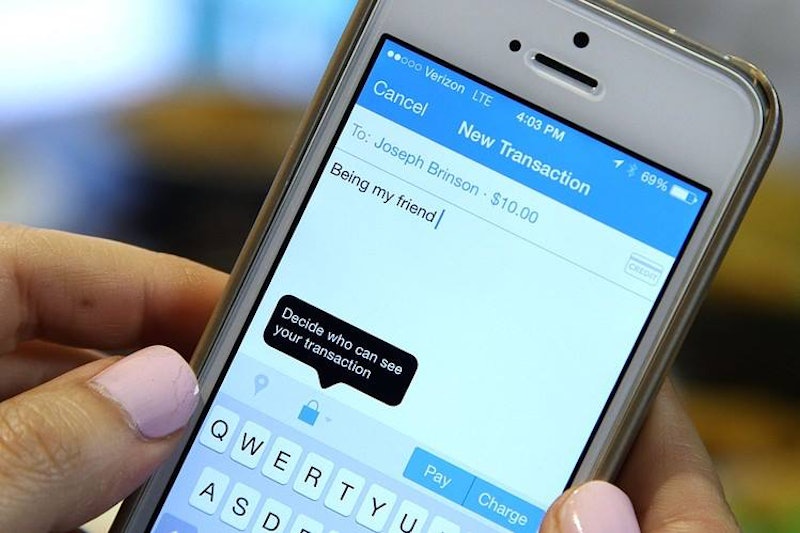 If you're up to speed and connected to the rest of the world via the marvel that is your smartphone, offs are you've heard of the popular money sharing app Venmo. At the very least, you've probably seen someone use it — and if you use it yourself? Well, then, you'll be intimiately familiar with the different types of people who pay you on Venmo. In fact, we've all been paid by each of these types of Venmo users; the same way there are certain types of people you'll always see at a wedding, or certain roommates you'll always have in college, so, too, are there people who you'll always encounter on Venmo. It's a fact of life.

Looking back at my own payment history, I can see that my payments have been distributed among and received from the same five or six people. The notes all usually say the same thing or have the same series of emoji attached (although seriously, at this point, we're all just waiting for the Venmo interface to support GIFs) — and after a while, it's hard not to stereotype both that group of people who make up the bulk of your transactions and the messages they always leave with their payments. Obviously everyone is more than the sum of their parts... but let's face it: These are the six people you're most likely to receive money from on Venmo.

When you share a space with someone, it's inevitable that you'll end up either paying money for something they need, or splitting the cost of something you both need. Whether it's something practical like toilet paper or paper towels, or something more akin to a handle of blue raspberry Rubinoff, we've all had our roommates get us back on Venmo.

Picture this: You're out for a night of debauchery with your best friend... and you two are so turnt that you end up paying for more of her drinks than you can afford. Amidst all the noise of whatever club you're at, she yells, "I'LL TOTALLY GET YOU BACK NEXT TIME!" When you wake up in the morning with a terrible hangover and an even worse bank statement, you'll have no option but to send her a request for the last few drinks she charged to your tab. It's OK. We've all been there.

3. The Friend's Significant Other

If you're on a double date (or third wheeling) with your friend and your friend's SO, you might end up with your pal's partner popping up regularly in your Venmo feed. I find this to be a good way to keep track of the average amount of people one must go through in order to find their truest love.

OK. I get it. Venmo notes were practically invented for emoji — but you don't really need to bombard every note with a million emoji every time. I definitely appreciate you paying me $10 for your share of the tequila, but a martini glass emoji, a syringe emoji, and a dancer emoji followed by 20 dizzy-faced emojis is just overkill.

This one leaves notes like, "Thanks for the memories even though they weren't so good" or "Because everything sucks." They might sometimes get you down, but the Morbidly Negative Friend is also a nice contrast to the Overenthusiastic Emoji User. Everything in moderation, right?

The friend who tells you exactly what she's paying you for, in one word or even less. Giving her quarters to finish washing her clothes might show up as just "laundry"; a trip to the liquor store will show up as "booze"; part of the Netflix subscription might show up as "& chill," and paying for her cover might just show up as an emoji moneybag. You go, minimalist friend.

If you heavily identify with one of these, it might be time to diversify your transaction notes game. Or, you know, if you're committed to the brand you've made for yourself on Venmo, you do you, friend.