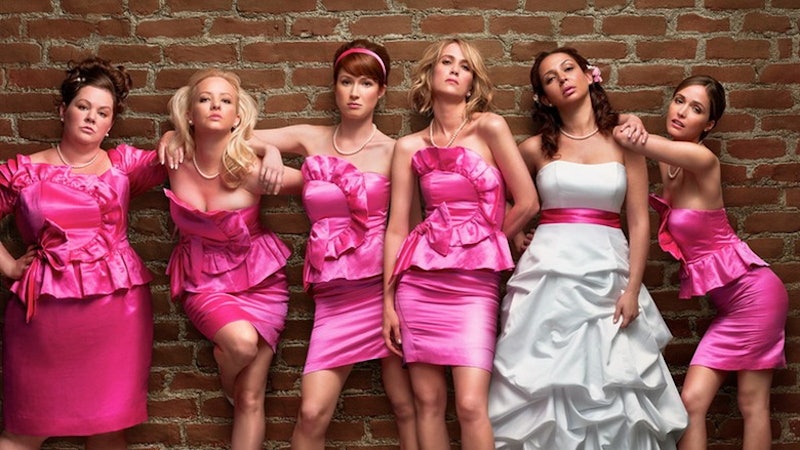 Ahhh weddings! A magical day where family and friends gather to eat, drink, and be married, as the Etsy artwork says. Though I have yet to tie the knot, I've attended and been in my fair share of weddings. And if there is one thing I've learned, it's that no matter how unique a couple tries to make their day of matrimony, certain aspects are always the same. Someone is bound to break the wedding dress code. There is sure to be some sort of disaster. And you are guaranteed to run into a slew of colorful characters at the reception.

While it's true that no two guest lists are ever alike, there are multiple personalities that make their way to every ceremony. You could be a professional bridesmaid or a nuptial newbie, and you will still run into a groomsman who has had one too many shots and an aunt who is a little too emotional for the occasion. But we don't fault these guests for their minor personality flaws. After all, they are just as important to the wedding as the bride and groom.

So next time you witness two people saying "I do," see if you can spot these 15 guests. Chances are you'll bump into all of them before the bride tosses her bouquet.

A member of the bridal party and the pity party, this lady loves feeling sorry for herself. When she's not standing beside the bride, she's complaining about her single status to anyone who will listen (or is just too polite to run away).

He's there for the open bar... and not much else. Though he's honored to stand by his bro on the big day, his priority is to get drunk and dance till his clothes come off. And trust us, they will.

Even the bride and groom aren't quite sure how this person scored an invite. But after asking around, they remember that he is the son of a second cousin of an aunt of a friend of the bride's father.

She scoffs at the bride's cleavage-baring dress and rolls her eyes upon seeing the DIY decor. Mind you, this guest does not have to be an actual grandma to offer her unwanted opinion.

She has a drink in one hand and an iPhone in the other. While she captures some sweet candid moments, she's too busy thinking of the perfect caption to enjoy the fun. #weddingstruggle

She is just ::sniff:: so ::sniff:: happy ::sniff:: for the bride ::sniff:: and ::sniff:: groom. In between her tear-filled tangents, she shares stories about the bride that only lead to more crying.

He's the reason the couple considered a dry wedding. Unable to hold his liquor or off-color commentary, this relative will be found passed out in the bathroom by the end of the night.

You'd think this guy was a judge on Top Chef by the way he eats his dinner. Every bite is followed by a comment on appearance, flavor, and originality.

He spends dinner staring you down from across the room, and offers an awkward wave when you finally make eye contact. While he's probably harmless, it may be best to avoid him on the dance floor.

Sporting a suit and winning smile, he makes all the women swoon. Be ready to fight for his attention, especially against that cute but cunning flower girl.

She constantly hits her champagne flute in hopes of witnessing a good lip-lock between the bride and groom. At first you find it cute, but after a few minutes you start thinking of ways to steal her glass.

This lady is the life of the party... or at least the dance floor. Though she specializes in the "Cupid Shuffle" and "YMCA," she's not afraid to bust out her own unique moves.

Forget politics or pop culture. This guest would rather discuss divorce stats with her dinner mates. Though it'd be easy to start an argument with the resident pessimist, I suggest you simply smile and nod.

He may not be the best man or father of the bride, but that doesn’t stop this guest from making a speech. Depending on how many drinks he's had, his sentiments could be super sweet or hilariously awkward. Either way, you're happy to sit back and listen.

More like this
Androgynous Formal Wear That Will Make You Feel *So* Fancy
By Megan Lasher
10 Ways To Be More Empathetic To Your Partner
By Raven Ishak and Lexi Inks
Think Your Partner Is Cheating? These Tarot Cards May Confirm Your Suspicions
By Kristine Fellizar
Why A Libra & Libra Couple Might Become Codependent
By Kristine Fellizar
Get Even More From Bustle — Sign Up For The Newsletter