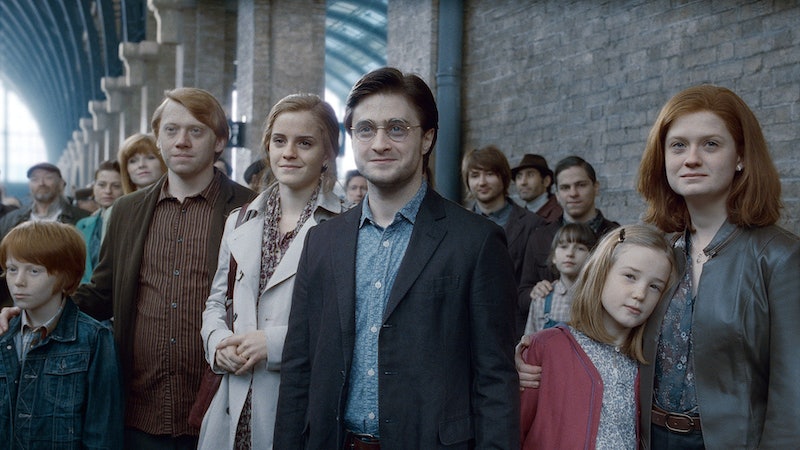 All the big news about James Sirius Potter has us wondering if we will ever get a Harry Potter sequel. J.K. Rowling has said she's got no interest in returning to Harry himself, but what about the next generation? With 12 Weasley grandchildren running around Hogwarts, there are bound to be plenty of mysteries and shenanigans for Rowling to tell us all about.

The Harry Potter fandom got a dose of rejuvenation on September 1, when Rowling tweeted James Sirius' first day at Hogwarts, and even included his house placement. Now we're all wondering what secrets she has left to tell. I've already written about the character futures Potterheads want Rowling to reveal, but that only scratches the surface. A sequel series following the extended Weasley clan — which, of course, includes Harry and Ginny's three children — could tell us so much more.

These are the six most fantastic and controversial things I think could happen in a Harry Potter sequel. They aren't all happy, and you might disagree with some of them, but I think I've hit upon the few essential components that could make the sequel — if Rowling ever gets around to writing it — truly amazing.

The Sorting Hat made it clear that Harry would do well as part of Slytherin, but, because he didn't want any part of that infamous house, Harry wound up in Gryffindor instead. Years later, when Harry's youngest son, Albus Severus, confesses his worries about winding up in Slytherin, the grown-up Boy Who Lived tells him not to worry, that the Sorting Hat will take his wishes into account. It would be really boring to have Harry only produce little Gryffindors, and a Slytherin baby would be the perfect addition to the Gryffindor-heavy Weasley clan. For an amazing Harry Potter sequel, Albus Severus just has to be sorted into Slytherin House.

Fans have maintained for a long time that Herbology professor Neville Longbottom takes over Hogwarts after Minerva McGongall retires. Rowling has yet to confirm this as canon, but it just makes sense. The Longbottoms don't have any confirmed children, as yet, so having Neville assume the role would continue the tradition of childlessness among Hogwarts Headmasters. And who doesn't want a Horcrux-destroyer and Sword of Gryffindor-wielder to lead Hogwarts after that climactic battle?

I know, I know. This is just the worst possible thing, right? But, honestly, you're going to need a villain for the next generation of witches and wizards to face. There's no reason not to make that villain the most universally hated among fictional characters, so Umbridge absolutely must manage to get out of Azkaban. Whether she then kidnaps small children and feeds them to cats is entirely up to Rowling, however.

In the Harry Potter and the Deathly Hallows epilogue, Ron tells daughter Rose to out-score Draco Malfoy's son, Scorpius, every chance she gets. This simple statement blew wind into the Rose/Scorpius ship's sails, and now many Potterheads — myself included — are convinced that, when and if Rowling writes a Harry Potter sequel, there will be a Weasley/Malfoy romance in the mix.

Luna Lovegood and Rolf Scamander Take Over for Hagrid

It only makes sense that Luna Lovegood and her husband, Rolf Scamander, would take over teaching Care of Magical Creatures when Hagrid retires. Of course, Hagrid's retirement could be quite a way down the line, given that his giant's blood grants him a much longer lifespan than that of a human. Still, as wizarding world naturalists, Luna and Rolf are the logical choice as successors.

Look, I don't want McGonagall to die any more than you do. She's my second-favorite Hogwarts professor, and I've grown to love her dearly. But the Hogwarts Headmistress isn't getting any younger, and I don't think it's a terrible idea to have Harry's children encounter the loss of a beloved professor as he did. McGonagall's death needn't be as traumatic as Dumbledore's, but it absolutely should happen in the Harry Potter sequel.