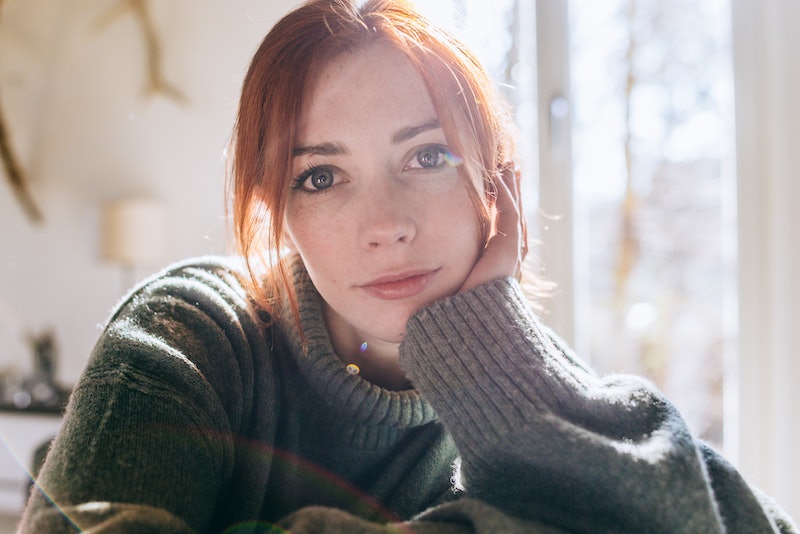 The concept of feminism really couldn't be easier to grasp, but for some reason, it can still be really easy to lose sight of just how simple feminism is meant to be. And it's even easier to compare how we live our feminism to how someone else lives theirs. But feminism isn’t a competition, and there is no list of things you can do that will automatically make you a better feminist than someone else. So let’s quit comparing how we live our feminism to how others live theirs. Because there is no one way to be a feminist.

If the following nine things apply to you, awesome! You're living your feminism your way, and you should feel proud of that. But don’t think it makes you more of a feminist than those who choose to live their feminism a bit differently than you do. Here are nine things that don’t make you a better feminist than someone else.

You don't have to be assigned female at birth to be a great feminist. There are so many inspiring examples of male, transgender, and genderfluid feminists in pop culture alone that prove this to be true. But there are probably a few awesome examples among your own social circle of people who weren't born anatomically female — or even if they were, don't necessarily identify as such.

I know there are feminists that can relate to this in my own social circle, and they're rocking feminism just as hard as this cisgender female.

Did you major in women's studies? Great! That said, a college degree doesn't determine how "great" of a feminist you are. College isn't for everyone; there are lots of ways to be successful and educated without ever stepping foot in a university, and not everyone can (or wants to) spend thousands of dollars on a degree.

Whatever a person's educational background, it doesn't make any difference for how well they're able to grasp, learn about, and carry out feminism in their lives. It's awesome if you know your theory and history, so long as you don't wield it over other feminists as proof of your superiority.

3. Choosing To Be Single

There is nothing anti-feminist about dating, being in a serious relationship, or marrying young. Choosing to be single is super feminist if it's what you want, and it's incredibly empowering to choose being single over being with someone who isn't right for you. But being single doesn't automatically make you a better feminist than the girls who spend their weekends brunching and cuddling with their significant others.

4. Not Taking Your Spouse's Last Name

If I get married, I don't plan on taking my spouse's name. I love my uniquely weird last name; I've spent the better part of 25 years telling people how to correctly pronounce it, everything I've gotten published has been under this name, and I just really want to keep it. But choosing not to take my future spouse's last name will not make me a better feminist than someone who wants to go the traditional route and change her name after marriage.

Whether a woman chooses to change or keep her name isn't really the point here; the point is that you make your own decision about your own name. Period. As long as your last name ends up being the one you choose, you're being feminist.

5. Waiting To Have Kids (Or Not Having Kids At All)

Having your first child at 18, waiting to have kids until your 40s, or never having kids at all does not decide what kind of feminist you are.

If I ever have children, I hope to be well out of my 20s first. For me, that is the best and most feminist choice I could make. But ladies who choose to have all their children by 25, and actually manage to rock motherhood at such a young age, are just as feminist as those of us who feel ambivalent about kids. All that matters is that you make your own decisions about your body, and then stand by those decisions.

Working your butt off and getting to watch your goals become your reality is awesome, and as a sort of workaholic myself, I don't think the term should be considered negative in the slightest. But being a self-proclaimed workaholic (and being happy about it) doesn't necessarily make you a better feminist or a stronger woman than those women who don't work as much as you do.

Women who stay at home with their kids (who work their butts off, too, by the way) and women who save up their money for years, then randomly quit their jobs and take off to live the nomad life for a while, are just as feminist as the real-life Olivia Pope's of the world.

It doesn't really matter what kind of professional you choose to be. If you're working toward the goals you feel are most important, whatever they may be, then you're killing it at life and living your feminism. Keep it up.

7. Showing Or Not Showing Skin

I love showing skin, and I love dressing modestly — but neither of these wardrobe choices makes me more feminist than anyone else. Of course, there is something very feminist about being comfortable and confident enough to show your skin without feeling fear or shame. But it's also very feminist to dress in a way that you feel shows respect for yourself, your faith, and/or your culture.

When it comes to clothing, what matters is that you're the one dictating what you wear and why. Dress however the hell you want, whether that means sporting a deep V or a Peter Pan collar, and you'll be winning feminism.

Every feminist should be able to pursue the kind of sex life she wants, and that includes abstinence. An active sex life doesn't trump abstinence, and it certainly isn't more feminist to be sexually active than it is to abstain from sex altogether, or to wait longer than normal to lose one's virginity.

Public protests from movements like Free the Nipple are super cool and important, and they're doing great things for women worldwide. You better believe that if I ever get the chance to free my nipples with a group of other nude-loving, body positive ladies, I fully intend to do it. But some feminists don't feel compelled to participate in group protests or displays, and that's perfectly fine, too.

No one feminist is the same, so it wouldn't make sense if we all lived our feminism the same exact way. What's important is that we allow ourselves to be whatever kind of feminists we want to be, and that we support other feminists — no matter how differently they do things. Because diversity is always something to celebrate.