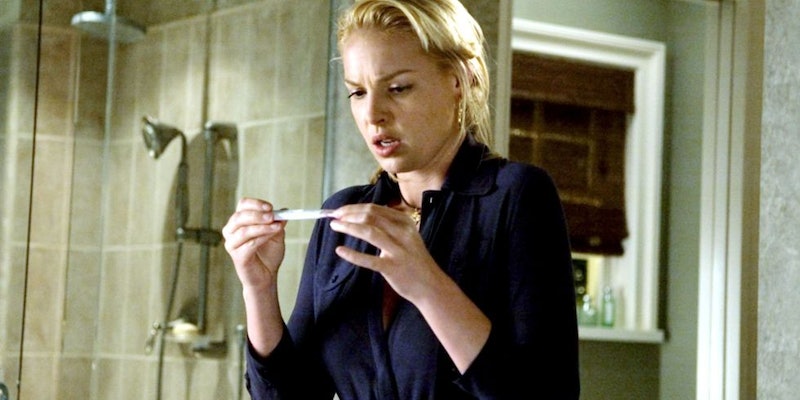 When it comes to trying to get a handle on your fertility and odds of conception, it seems like there are a million scary X factors out there: do the foods you're eating now affect your chances of getting pregnant? What about the foods you ate 10 years ago, when you were subsisting primarily on gas station taquitos and neon-colored energy drinks? What about that time you went to Burning Man in college — did that, uh, experience do anything weird to your eggs? It can feel like every small thing in your life — especially stuff that's totally out of your control, like your current age— factors into your chances of conceiving. But there's at least one thing you don't need to be worried about: your age when you got your first period.

Your age when you got your first period — or your "age of menarche," if you want to get classy/ technical about it — impacts a number of things in your life, including your risk of developing breast cancer (higher for women who got their first period at age 12 or younger) and your odds of developing heart disease (higher for women who began menstruating at an age far above or below the average age). The average age of menarche in the U.S. right now is 12, with most people getting their first periods between the ages of 10 and 15.

But despite one 1992 study that reported that women who got their period after age 18 had more fertility trouble than women who got their periods at younger ages, no subsequent research has replicated or confirmed this point — and most current research on age of menarche focuses on the way it affects cancer risks, not fertility factors. So if you were worried that your early or late first period somehow made you less likely to get pregnant, cross that thought off your "random things to wake up in the middle of the night and worry about" list.

Women who start their period at an early age don't automatically enter menopause at an early age — so you shouldn't be concerned that getting your period on the early side gives you a shorter window in your adult life in which to conceive. The age at which you start menopause is not tied to your age of menarche — recent research has suggested that the age at which you start each of these two reproductive system changes are both controlled by our genes to some extent, but the specific ages at which they begin are unrelated.

Similarly, women who started their periods at a later age have nothing to fear. You don't have "lazy ovaries" or any other reproductive problem — your body simply started menstruating when it did due to genetics and external factors. So no, you're not a reproductive underachiever.

The only time when starting your period at a later age might be cause for (reproductive) concern is if your late menarche was tied to a health issue, like polycystic ovarian syndrome or an underactive thyroid (hypothyroidism). Some women with PCOS struggle with fertility, and may need to work with their doctor when trying to conceive — but PCOS is treatable, and it definitely does not render you infertile.

Similarly, many women with underactive thyroids struggle with their fertility, though proper medication to stimulate your thyroid's production of hormones can usually improve your odds of pregnancy. But in both cases, a specific health issue is causing those fertility troubles — not the age at which you started menstruating.

And of course, remember that this goes the other way, too — getting your period at a later-than-average age is not a form of birth control. The irregular periods that often come with our first years of menstruating don't mean you're less likely to get pregnant — if you've started your period, you're still ovulating, even if you're not ovulating on a regular schedule (if anything, irregular periods can actually keep you from noticing that you've become pregnant).

So if you get your period after you've become sexually active, know that you can very easily get pregnant in your first year or years of having your period. So don't bank on your non-existent "lazy ovaries" to protect you — just use some frickin' birth control.

When you're trying to puzzle out your own fertility, there are plenty of factors you can focus on that might really have an impact — such as your current age, your stress levels and whether or not you smoke. But let's leave the age when you got your period out of this.