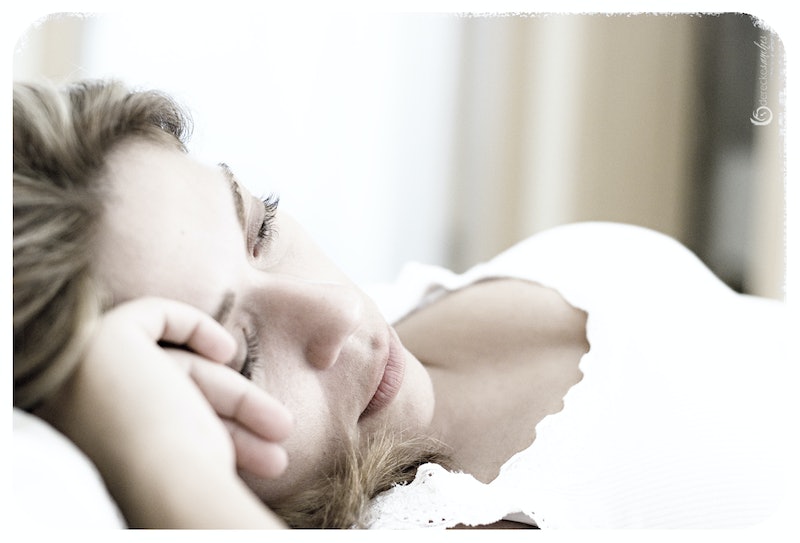 Ever since I was a little girl, I've known that I've wanted to have children; but ever since I was 22, when I began to hear some of the most prominent myths about what causes infertility, I've been worried that I would never be able to have them. Though many of us think we have all the facts about sex and reproduction, we've all be exposed to a shocking amount of rumors and bad information about infertility, and eventually, it can begin to invade even the most reasonable person's thinking. And this lack of understanding about the basic facts of fertility and infertility can lead to panic.

I've witnessed this needless infertility panic among women in their twenties — and simply being exposed to their worries can lead you to begin to fret about your own fertility, too. Am I infertile because my period is irregular? Am I likely to have a have a miscarriage because my mom had one? It's easy to understand the concern: there are so many different factors that go into a successful pregnancy, and so many invisible factors that impact our fertility. It's tough to put faith in the process when you don’t have a lot of information.

But misinformation about infertility can lead to a lot of problems — including encouraging women to hurry up and have a baby early "just in case," out of fear that they won't be able to get pregnant later in life. When we make such big decisions based on partial or incorrect information, we only hurt ourselves. In honor of National Infertility Awareness Week, Bustle spoke with gynecologist Colleen Krajewski, M.D. MPH, and clinical psychologist Julianne Zweifel in order to bust eight of the most common infertility myths out there, to help you stop panicking — and start making decisions based on the real facts of fertility.

The Myth: Some women believe that it will take time for their body to “flush out” birth control hormones when stopping birth control, therefore delaying their ability to get pregnant.

The Reality: In fact, women can get pregnant soon after stopping birth control, even within the first month. Though a woman’s body may have changed in the years since she first started birth control, the birth control itself does not affect her fertility.

“No methods of contraception cause infertility,” Colleen Krajewski, M.D. MPH, a gynecologist affiliated with The National Campaign to Prevent Teen and Unplanned Pregnancy, told Bustle.

“Some methods like the pill, the patch, the ring and IUDs have an almost immediate ‘return to fertility,’ and other methods, like implant and shot, have a variable return to fertility.” Women over the age of 35 may consider avoiding birth control methods that could cause a delayed return to fertility, given that a woman’s fertility decreases at a more rapid rate after 35 — but this is simply to give you a larger window of fertility to work with, not because birth control will negatively impact your chance of conceiving.

Myth #2: Irregular Periods Are A Sign Of Fertility Troubles

Myth: Many women think that having an irregular menstrual cycle (shorter than 21 days or longer than 36) means that they will have trouble conceiving.

But irregular periods do not guarantee impaired fertility. Women can have irregular periods for a variety of reasons — ranging from stress and overexercise to more serious health issues like endometriosis — and not all of those factors have anything to do with their ability to conceive.

Myth: Many women are having children later, so that means that I can put off having kids, too.

Reality: It depends. "Understandably, women put off having kids because they want to be responsible," Julianne Zweifel, a clinical psychologist and clinical adjunct professor in the Department of Obstetrics and Gynecology at the University of Wisconsin School of Medicine and Public Health told Bustle. "They want to be prepared, they want to be secure. They put off having kids until they feel they've reached a certain level of their career. But the trick is, they keep moving that bar up. What they consider safe enough keeps edging up."

According to the American Society of Reproductive Medicine, a woman’s best reproductive years are in her 20s, with fertility gradually declining in her 30s, particularly after age 35. (Some debate this particular cut-off date.) Another important consideration that seems far less talked about is that age may affect fertility more so regarding how long it takes to get pregnant. According to a study in Helen A. Cacio's Management of the Infertile Woman , women ages 20–24 have an 86 percent chance of conceiving within a year of beginning to try, and women ages 30–34 have a 63 percent chance. The chances of women of all ages becoming pregnant after trying for two years, however, leaps up to 90–94 percent.

Conceiving at a later age also increases a woman’s risk of pregnancy complications, such as gestational diabetes and chromosomally abnormal fetuses. Women should be careful, though, to not place too much focus on a particular age cut-off. “It’s not true that women over 35 have all of the risk,” Krajewski says. “Conceiving at 34 years old, while avoiding the label ‘advanced maternal age,’ does not substantially change the riskiness of a woman’s pregnancy when compared to a woman who is 35.”

Myth: I have polycystic ovarian syndrome or endometriosis, which means I won't be able to get pregnant.

Krajewski suggests that affected women talk with their doctors early, even if they do not want to conceive right now — this can help them develop a better understanding of how the condition is affecting their reproductive and general health and what can be done to improve it. For example, women with well controlled polycystic ovarian syndrome have a better chance of conceiving. “It’s not too early to see a doctor and start a treatment plan that includes regular exercise,” Krajewski says. “You don’t have to be actively trying to conceive in order to get any chronic medical conditions under control.”

Myth: My mother had trouble conceiving, so I will, too.

Reality: Miscarriage is fairly common among all women — various studies cite overall miscarriage rates in the range of 10 to 25 percent. Krajewski does warn that some inherited disorders can cause infertility. However, these are rare since infertility itself makes the disorder difficult to pass on to the next generation. So typically, your mother's struggles to conceive do not necessarily mean that you will experience similar struggles.

Myth #6: If I Didn't Get Pregnant From Unsafe Sex Once, I Never Will

Myth: I've had unprotected sex in the past and didn't get pregnant, so I must be infertile.

Reality: A 2012 study of unmarried men and women age 18–29 found that 19 percent believed they could not get pregnant. Of those who perceived infertility, 37 percent said the belief stemmed from having had sex without a contraceptive and not becoming pregnant.

Krajewski attributes this to a misunderstanding of one-time probability versus one-year probability. Though the chances of a woman in peak fertility getting pregnant after one try are relatively low (roughly 20–25 percent), a woman’s overall chances increase over time. For example, women aged 25–29 have a 78 percent chance of getting pregnant within one year. Time is often all it takes to get pregnant. “I notice a lot of women believing they’re infertile,” Krajewski says. “I believe this is based on a belief that if they didn’t get pregnant after X number of acts of unprotected intercourse, then they must be infertile.”

Moral of the story: unless you are trying to get pregnant, always use birth control.

Myth: When couples struggle to conceive, it is usually because the woman has fertility problems.

Reality: “Many men have even less understanding of reproductive statistics,” Zweifel says. “They think they have all the time in the world.” In fact, infertility has a nearly equal chance of being a man’s fault as a woman’s. According to the American Society for Reproductive Medicine, approximately one-third of infertility is attributed to the male partner, one-third to the female partner and one-third to both the male and female partners.

Involve your male partner in conversations about fertility from the start, and consider his health in the equation when talking to a doctor.

Myth #8: You Can "Just Tell" If You Are Infertile

Myth: I just have "a feeling" I won't be able to get pregnant. My body must be telling me something.

Reality: Some women simply have a dreadful feeling they will struggle to get pregnant — like this woman on a discussion board on Weddingbee.com: "Does anyone have (or have you in the past) a feeling like you won’t ever have a baby? Even before we started [trying to conceive], I always felt like I would have problems in this department."

Feelings don’t indicate facts. But Krajewski doesn’t believe women should ignore internal anxiety altogether. Rather, they should examine its source. Does it spring from partner/relationship issues, a desire to conceive, ambivalence about children, external pressure to “have it all,” career-related stress or misinformed dread?

Editor's Note: This article is not a substitute for professional medical advice, diagnosis or treatment. If you have questions involving your own fertility or any other medical condition, seek the advice of your physician or other qualified health provider.