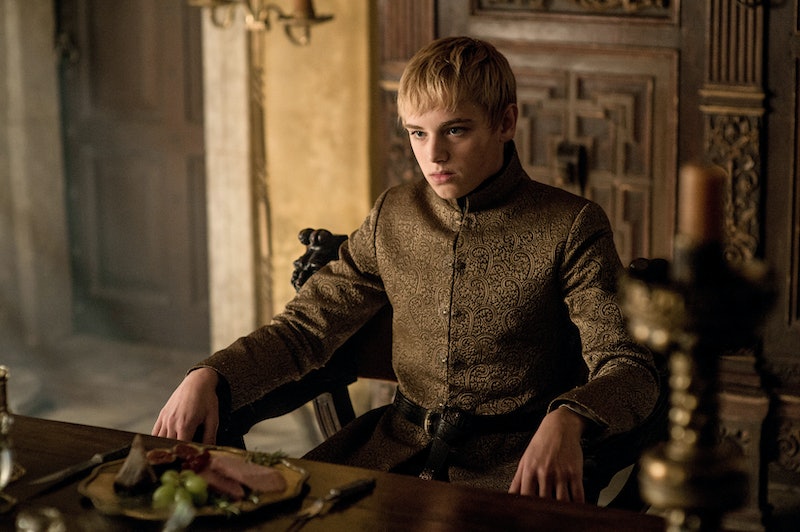 The boy king was conspicuously absent from the final run of Season 5 episodes, so let's briefly recap what Tommen was up to last time we saw him. In Episode 6, he watched as his beloved Margaery was carted off to prison for lying under oath about her brother's sexual proclivities. (Apparently he had temporary amnesia and forgot that he was the king and could, you know, order the Sparrows to not imprison his queen.) The last time we saw him was in Episode 7, "The Gift," when he was threatening to start a war with the Faith to get his wife back. Cersei managed to talk her son down and agreed to go speak with the High Sparrow herself. We all know how well that worked out for her:

So, what's next for Tommen? We don't have any book material left to analyze for the character, as Season 5 caught up with the end of his story in A Dance With Dragons, so it's hard to predict... but this is Game Of Thrones, so the answer is probably, "Nothing good."

Remember, Season 5 opened with a flashback to Cersei's youth, which pinpointed the source of paranoia surrounding her children. When she was a little girl, a woods witch gave Cersei a prophecy that stated all three of her children would die. "Gold shall be their crowns, and gold their shrouds," Maggy the Frog told young Cersei. Now that Joffrey and Myrcella are both dead (RIP, one of you, you know which), Tommen's got a great big target on his back, whether he knows it or not.

When Cersei finds out about Myrcella's poisoning, she's likely to become even more fiercely protective than ever of her only remaining child. But, of course, thanks to Macbeth, we all know that prophecies have a funny way of coming true even (especially?) when you're taking action to avoid them. Could Cersei inadvertently cause Tommen's premature demise?

To be fair, only two of the three leeches that Melisandre burned in Season Three resulted in the deaths of their intended targets (Balon Greyjoy is still alive and kicking). So, maybe in Westeros spells and prophecies have a habit of only coming two-thirds true. If so, Tommen might actually make it out alive. But, remember how Thrones has a habit of pitting characters you like against each other? Like when Tyrion had to stave off Stannis and Davos in Season 2's Battle of the Blackwater? Or the epic Brienne vs. The Hound fight in Season 4?

Most viewers are probably pulling for Dany to finally fly across the Narrow Sea and conquer Westeros with her dragons. But, what do you think will happen to the person currently occupying the throne when she gets there? She'll ask him very nicely if he'll please move and he'll acquiesce without a fight? Just think of what Dany did to the slave owners of Astapor (slaughtered them with their own Unsullied), to the Wise Masters of Yunkai (nailed them to crosses), or to the noblemen of Meereen (roasted them with her dragons). The Mother of Dragons doesn't exactly have a reputation for being lenient with the rulers she has overthrown. How will Dany's fans react when she finally arrives in King's Landing... only to immediately sentence poor, innocent Tommen to death?

There's almost no way Game Of Thrones will end with Tommen still sitting on the Iron Throne. But, it's equally difficult to imagine him vacating the position while still alive. At some point before the show moves into its endgame, all of us are going to have to say a very hard goodbye to the sweetest king Westeros has ever seen.

But, as long as Ser Pounce rides out the coup unscathed, I think I'll be okay.