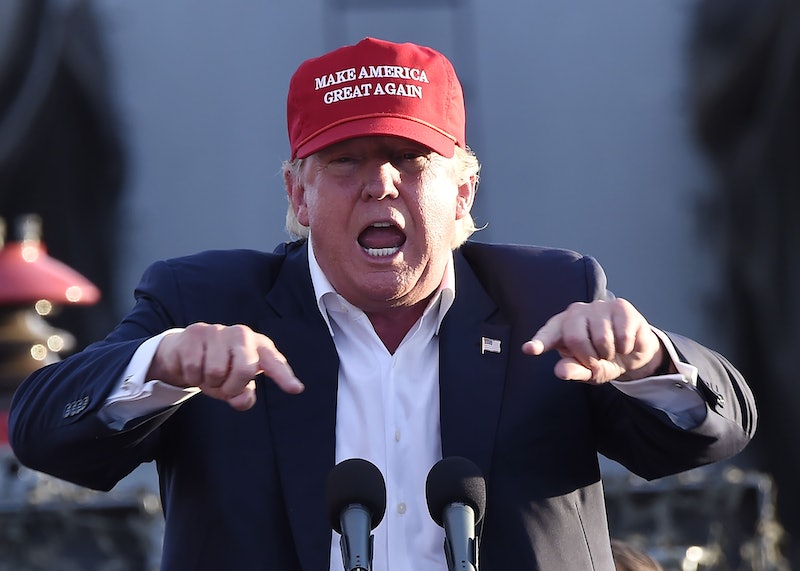 It's been hard to make sense of Donald Trump's run for president. But one bright spot in the businessman's quest for the 2016 Republican nomination is the added amusement he brings to the debates. Playing class clown as much as political upstart, Trump's most insane moments from the GOP debate on September 16 added some much-needed comic relief to the event (as well as a few necessary eye rolls).

As Trump continues to dominate the Republican Party's polls, more eyes are watching and waiting for him to make a mistake that will send him back to the boardroom. (Of course, he'll have to fight Arnold Schwarzenegger to host The Apprentice , and that's a battle he's bound to lose.) Luckily, in the second debate, viewers did not have to wait long to see Trump act like, well, Trump. Much like in the first debate (and in his campaign thus far), the mogul managed to make outrageous claims about his fellow candidates. Even though there was an actual plane on the stage, Trump still managed to be the most ridiculous aspect of the night's events.

Here is a sampling of the most insane Trump moments from the second GOP debate:

And this was before Fiorina even answered.

"I think I have a great temperament."

He said this after saying that Rand Paul didn't belong on stage.

After Paul commented on Trump's lack of judgment and tendency to criticize others based on appearance, Trump responded, "I never attacked him on his look. And believe me, there's plenty of subject matter right there. That I can tell you."

Jeb Bush, once the presumed party frontrunner, has been criticized for looking and sounding staid next to Trump's antics. In a moment when Bush repeatedly interrupted him, Trump interrupted himself to make this little jab.

Immediately following the first GOP debate, Trump insinuated that moderator Megyn Kelly was on her period when she pressed him on his criticism of women's appearances. Trump apparently forgot all about that in the second debate, in which he portrayed himself as a defender of women. Criticizing Jeb Bush's recent comment that women's healthcare might not need so much funding, Trump said, "I respect women. I will take care of women."

"I Hear Your Wife Is A Lovely Woman"

CNN moderator Dana Bash asked Jeb Bush if Trump went too far in insinuating that Bush's stance on immigration is influenced by his Mexican-born wife. When Bush answered that he did, and said that he hoped Trump would apologize, Trump responded, "Well, I have to tell you, I hear phenomenal things. I hear your wife is a lovely woman." He didn't apologize.

Amid a discussion about foreign policy, Trump said, "I'm a very militaristic person." What does that mean, Donald? In what sense? Trump has never served in the military or in public office in a capacity in which he could vote to take the country to war. He went on to claim that he was "the only person up here that fought against going into Iraq" by being very vocal about his opposition. When has he demonstrated his militarism?

"A lot of what we talked about tonight is words and will be forgotten very quickly."

Correct! In fact, everything talked about during the debate was talked about in words. And it is true that many of those words will be forgotten. That's pretty much a given for any debate. The thought is that the candidates' ideas and behavior will stick with voters, as The Don's do tend to do. So don't worry about the words, Trump. You still made an impression.