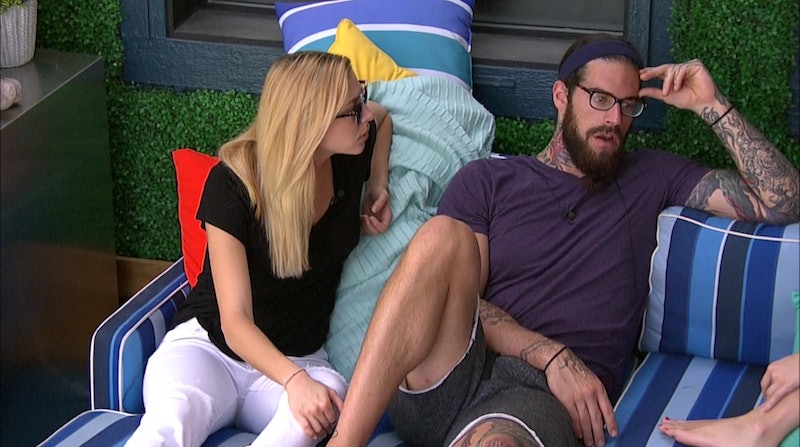 Life in the Big Brother house has to be hard for anyone. But for a romantic like Austin, navigating the game and the constantly changing alliances has to be difficult — especially when you’re entirely distracted by the new love of your life. And for a while there, I believed that Austin really was so distracted by his love for Liz that he’d be willing to give up the Big Brother game for her, and that they would ride happily off into the sunset — hopefully with $500,000 in hand.

Because, you know, nothing makes a fairy tale ending easier than a pile of cold hard cash.

But, lately, Austin has been saying some things that have me worried. Not only did he turn more toward the game in his last few days in the house, Austin said some things about Liz in particular that got me thinking that maybe this isn’t true love between them. And maybe Austin knows it.

Because there’s no way that someone who is in love with someone would say the things that Austin has been saying lately. Just take a look at some of these quotes that he has said either to Liz or in reference to her. Do these sound like the lines of a man in love?

1. “We All Just Met Each Other A Couple Of Months Ago. I Have Family.”

Already questioning a connection that formed over such a short period of time, Austin? Yeah you and the rest of America.

2. “If She Feels This Way About Me Using The Veto On Myself, Maybe I Was Wrong About Her.”

True love is selfless, after all... but I think Austin was seriously missing the point here.

3. “If Using The Veto Tears Us Apart, Then I Was Wrong About How She Felt.”

Damn — them are some fighting words. They also suggest that Austin is seriously doubting the sincerity of Liz’s feelings since that Veto comp.

Austin said this in his post-eviction interview. Isn’t that a little… selfish? Something tells me that if this were really true love, he would be rooting for her to stay in the game and make it all the way. Could his jealousy be a sign of trouble to come for the couple?

The man said these three magic words TWICE, and Liz didn’t say a thing in response. That’s definitely not a good sign.

Austin said this after Vanessa suggested taking Julia to the final three. In other words, it was an option, but not the best one for his game. Going against Liz’s family might just mean that Austin isn’t entirely in this relationship for the right reasons.

Well if that wasn’t a doozy of a dramatic accusation, then I don’t know what is. Austin said this to Liz about the fact that he had given up his girlfriend and his game for her. I don’t know that a relationship founded in true love would get so negative so fast. Wouldn’t you at least be thankful for the things the relationship had brought to your life, even if it ended?

If it were really true love, Austin wouldn’t have said half of the things that he’s been saying about Liz either to her face or behind her back. And it’s only a matter of time before Liz figures it out.